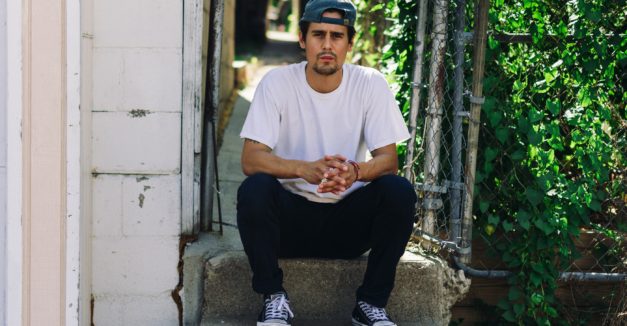 The last time we heard from Conny Franko on an album, he was penning a hazy, chaotic love letter to his hometown with Haunted Gauntlet and DJ Really Real. The city of Omaha was hyperbolically imagined but quite real on M34n Str33t’s Mutants of Omaha. The emcee was spiteful of Mike Fahey and effusive for the Gifford Park neighborhood.

On 2016’s La Maga, Franko has reframed his voice, not as the most observant walker of the block, but as a troubled and displaced citizen of the world. (Read this feature for the origin story of La Maga in Mexico with producer Sm-Grims.) The record is a marriage of the multicultural and the personal that enlightens and disturbs in the hip-hop mold. Toward the middle of the album, in the space of a few minutes, La Maga has drawn a connection between Ned Beatty’s famous sermon on capitalism in Network to Franko calling wistfully from the back of a song, “Taxman, why’d you take my mom’s house?”

From the album’s international vantage point, there is a leftist clarity about the world steeped in history and bodily insignificance. The latter idea is cemented by the album’s aesthetics. Sm-Grims’ minimalist piano production is melancholy elevation for Franko’s voice, which through most of the album feels desperately alone, until it’s grounded by the sounds of city squares and porches, women and children yelling and laughing.

The record is a psychological experience the way so much of Franko’s work ends up being for the listener. It’s inviting and episodic but seemingly unscripted. It’s like La Maga is a mural you’re standing with your nose against. The paint runs with vivid ideas and images — sex, depression, mind expansion, bloodlines, helplessness, Viva Latin America! — but there is no mantra or appendix. The artist formerly known as Conchance is a singular presence in the Nebraska music scene, and La Maga is puzzlingly and consumingly that presence.

Recent On The Records podcast reviews include Kait Berreckman’s Battle Scenes, Bogusman’s self-titled LP, Jack Hotel’s Voices From The Moon and Big Thief’s Masterpiece. Dive into the latest episodes with our playlist below: