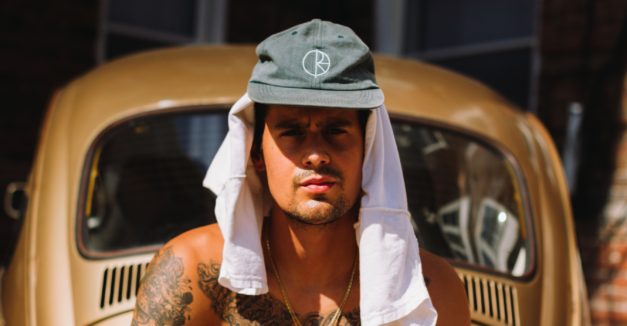 Conny Franko hops out of his gold ’70s Volkswagen on a cloudy summer afternoon outside Make Believe Recordings. It can be a bleak part of the city, 20th and Leavenworth: tall walls of corrugated metal keeping passersby from peeking into much of the block. But Franko seems at ease walking through the front gate of the studio and into the large lawn out front. Once inside the studio itself, it’s almost like a tight-knit boarding house, with producers and engineers chatting about aliens in the kitchen and smoking in the foyer.

The Omaha hip-hop artist (part of trio M34n Str33t and formerly known as Conchance) is more focused on the task at hand. He’s on his grind. After three years of working on La Maga, the new collaboration between him and longtime friend Oscar Carillo, a.k.a. SM-Grims, it’s easy to see why he’s eager.

La Maga, Franko’s second full-length, found it’s voice by reviving the pair’s friendship, echoing a chance meeting at a Denver skate park. Grims and Franko stayed in contact through e-mail, watching each other improve, until time drifted them apart. A rough patch in Franko’s life found him rediscovering Grims’ work, and finding a need for clarity.

“I had to get the fuck out of here ’cause I was fucking off,” he says. “I had to leave Omaha, I had to leave my job. I literally was like losing my mind here.”

Clearing his head took Franko to Mexico. After flying down to Cancun, he met Grims in-person for only the second time. Then they headed south to Playa del Carmen and took a ferry off the mainland to the idyllic island of Cozumel.

Inland Cozumel is a bit different from the resorts and tourist traps. Grims lives in a small apartment with inconsistent hot water and sparse air conditioning; “inconveniences”, as Franko put it, for someone who might not be used to it. But for him, those troubles didn’t mar the experience of skipping town to cut an album in the middle of a jungle.

“It’s hot,” Franko says. “It’s rough around the edges. It can be rotten fruit…”

“It can be beautiful things as well. A lot more personal, and a lot more sweaty.”

The two made music constantly in Grims’ apartment and hung out each day, smoking pot, drinking beers, taking Grims’ dog for walks and sipping fruit juice bought from the vendors lining the streets. It’s certainly a step up from Carillo’s first few months in Mexico after being deported from the U.S. in September of 2011.

“I come back to my country where I was never at in my entire life,” Grims says via email. “No friends, just an aunt that help me out in Monterrey. No equipment, no vinyl, no computer… until  moms came down and visit.”

They’d sit next to each other for hours, talking about the economic differences between Mexico and the States, Grims using his 13 years of producing experience to make beats as Franko wrote verses. It was different from making music in the America, Franko says, where producers might not be as interested in working line by line.

La Maga attempts to capture the duality of gorgeous and gruesome, like that on the island, Franko says. Named for a character in Julio Cortazar’s stream-of-consciousness novel Hopscotch, the title previews introspection into good and evil, right and wrong.

In the book, La Maga (“the sorceress” in Spanish) is a woman the main character manipulates; she’s clueless about their relationship, but very aware of how the world works. Franko sees her character’s timeline as similar to some relationships in his own. And though songs like “Capital’s List” touch on political themes, like U.S. imperialism in Latin America, it’s not a call to arms.

“It’s a completely personal record,” he says. “Made with a lot of anger, love, resentment… [and] failure.”

Anger certainly lurks beneath the surface in Franko’s delivery on this album. SM-Grims’ brooding, piano-heavy boom-bap tracks frame Franko’s on-edge voice as it careens non-stop through vicious imagery. “Virgin Shirley Temple” and “Half Stepper Kings,” the two singles released so far, almost totally eschew choruses in favor of whispered warnings. La Maga speaks to you from the dark crevices of an urban jungle and tells you to never come back.

Franko grabs all that verse space to dive into the depths of instability. A hot chorus could push these songs of sadness the wrong way.  One of the last tracks to make the cut, “Having Fun While Dying,” is about “tiptoeing on your last breath” and still finding joy shining through cracks.  “Kind of Blue,” named for the Miles Davis album, mourns a broken friendship.

The emcee-producer duo knows La Maga is not a club record. Instead, it begs close, careful listening as Franko explores acts of despair and of evil.

“It’s about how one can be completely conscious of what it is to be a good man, and be given all the right advice, but in the same sense do wrong because it feels right,” Franko says. “And sometimes when you’re doing wrong, you’re actually doing the right thing. It just depends on whose eyes.”

All Franko asks listeners is to keep in mind the humans behind the album and the boundaries they crossed to create it. Grims simply wants people to experience the world through his eyes.

“La Maga is definitely is a part of how I feel and see things in this world, not just in my country but the whole nine,” Grims says.

Weeks of travel, years of work and days of misery coalesce into an album that brings depression right to the ear. Borders don’t keep Franko’s painful emotions from cutting smoothly like silken knifes. And though the songs slap, number one smash hits don’t guide this two-man clique and probably never will.

“I’m not the best rapper, I’m not the best entertainer, performer, anything like that,” Franko says. “But I do love this shit, and this is like a fucking novel of me and Oscar. It’s a piece of artwork.”