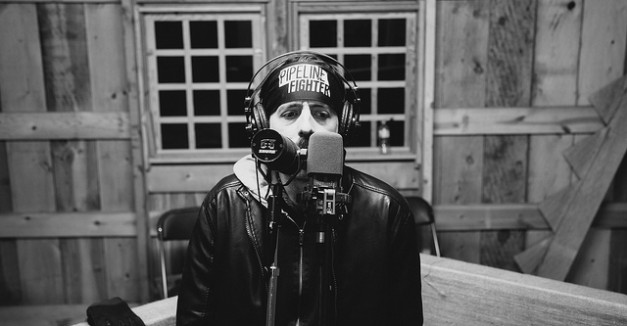 This is music powered by the wind and the sun.

Recorded in a barn built directly on the path of the proposed Keystone XL pipeline, the fundraiser album Stopping the Pipeline Rocks features 12 performances by Nebraska bands. Not only do songs such as Jack Hotel‘s “Sideways Lightning Blues” and McCarthy Trenching‘s “Ogallala Aquifer” sound pristine — having been engineered by Mark Wolberg and mastered by Doug Van Sloun — Hear Nebraska was proud to capture video for a complementary documentary performance DVD.

With thanks to our partners in Red Rebel Media‘s Michael Semrad and Bold Nebraska, proceeds from the fundraiser and album sales will go to the fight against TransCanada’s Keystone XL pipeline, and support more clean energy projects like the clean energy barn.

We’re happy to announce the album and DVD’s release will be this Tuesday, July 1. See below for the various packages you can pre-order with additional rewards.

Lincoln band Dirty Talker provided the most amplified selection with “Knocked Out,” a song sung so passionately that the corner of bassist and vocalist Justin Kohmetscher’s glasses are fogging up by the first chorus:

“You shouldn’t run away, just face the fight.”

See the video of the performance further below, and pre-order the album and DVD today.

(Posters and T-shirts will ship separately; album downloads will be distributed via e-mail)