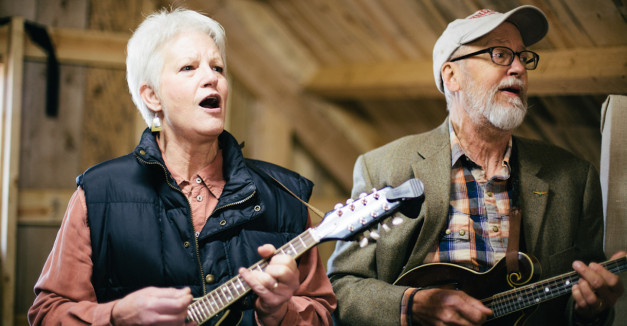 photo of Pam Barger and Steve Hanson by Bridget McQuillan

He grew up with what he calls its calming, serene sort of beauty, and he’s given it a soundtrack since the 1960s when his first band of “skinny, pimply, little white kids playing James Brown” would return home to Tekameh, Neb., after 150 miles of road to and from auditorium shows that paid $35 for the whole band. Before and since moving to Lincoln in 1968, Pipher has spun odometers on highways and roads between small Nebraska towns: playing homecoming dances and battles of the bands early on; now driving through the Sandhills as part of the Nebraska Arts Council’s touring program.

When he uses the phrase “back in those days,” it’s not as much a storytelling flourish as it is privilege earned through decades of sturdy musicianship. With bands such as The Toasted Ponies and The Lightning Bugs, Pipher continues to enjoy the togetherness of the Nebraska music scene and revel in his state’s landscape.

While telling a story, he’ll take you there, to the spot where he’s stopped his car in the middle of the highway at night because there’s no traffic. He’ll wave his arm like the grasses in the autumnal wind. He’ll look up, and you can see the stars, too.

“The thing I always loved about [Nebraska] is the air, the water, the space,” he says. “There’s problems with that now already, and I don’t want to see anymore. I’d like to keep that forever.”

As part of a group of 10 other bands and artists, Pipher’s Toasted Ponies drove to the Build Our Energy barn, just northwest of York, Neb., in November 2013 to record a couple songs powered by only the sun and the wind. The Nebraskans who joined The Toasted Ponies included The Bottle Tops, Brad Hoshaw, David Boye, Dirty Talker, Gerardo Meza, Jack Hotel, Dr. John Walker, Matt Cox, McCarthy Trenching and the Southpaw Bluegrass Band.

You can now pre-order the album via Bold Nebraska, which along with Hear Nebraska, Michael Semrad and Red Rebel Media, helped to produce the album, Stopping the Pipeline Rocks. See more info here. Hear Nebraska videographers and editors created a nearly 45-minute video compilation of live performances and interviews, which complements the album recorded by Mark Wolberg and mastered by Doug Van Sloun.

“I thought the barn was a great idea, and I thought recording in the barn was a great idea,” Pipher says, noting the barn’s position directly on the proposed Keystone XL pipeline route. “Symbolically, you have to think about what it is: barn-raisings. Again, it’s taking us back to our roots. We’re a farm state. People help each other. We’re in a community that would raise a barn.

This past Wednesday, Lancaster County District Court Judge Stephanie Stacy declared LB 1161 to be unconstitutional and void, thus overturning the law passed by the Nebraska Legislature in 2012 that gave Gov. Dave Heineman the power to approve the Keystone XL pipeline route through Nebraska. The decision sided with the plaintiffs, Nebraska landowners Susan Dunavan, Randy Thompson and Suz Straka. The ruling came in the middle of a 30-day public comment period, which encourages discourse on the national interest determination to be sent to the U.S. Department of State by March 7.

With lyrics shaped to fit Nebraska and the issue of the pipeline, Pipher and The Toasted Ponies performed Woody Guthrie’s “This Land Is Your Land.” See the live performance below:

video and photo of Jim Pipher by Bridget McQuillan