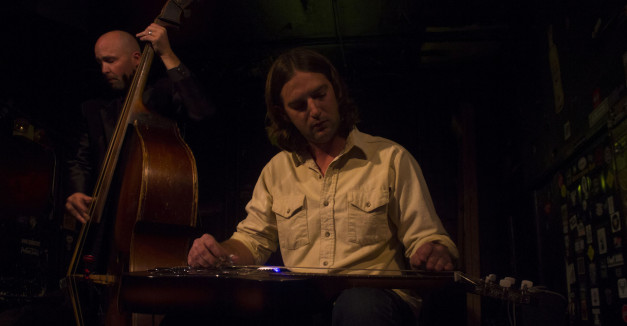 Play any track from Jack Hotel’s new album, Good Sons and Daughters, and you will hear the careful and clean picking of the banjo and guitar, along with the smooth, yet sharp, sweep of a violin bow.

Strumming becomes a novelty as Günter Voelker’s fingers jump from string to string.

A choir of strings help narrate the short stories grouped together on Good Sons and Daughters, which was released in May on Sower Records. With a majority of the songs written in first person, it allows the characters to tell their own story. We are on the run with Tobias after he “robs the service station on 13th and South,” and we see the lightning dancing over Salt Creek in “Sideways Lightning Blues.”

To find out more, Voelker sat down with Hear Nebraska earlier this summer to discuss the new album in greater detail.

Playing one of their biggest stages yet, Jack Hotel  roped in an energetic Railyard crowd at Nebraska Folk & Roots Festival last weekend, Jack Hotel will perform at the final Hear Lincoln event on Friday at noon. If you can’t make it Friday, catch them at the Stransky Park Concert Series on Thursday night at 7 p.m.

As an introduction to their Friday performance, Voelker answered some questions from Hear Nebraska, reflecting on his musical beginnings, the building of Jack Hotel and favorite moments from the festival this past weekend.

Hear Nebraska: What is your earliest musical memory?

Günter Voelker: My parents are secret musicians. Mom sings and used to play piano; Dad plays harmonica and dances. My sister and I were always surrounded by good players. It would be hard to pick a single memory. When guitars came out at a party or around a fire, we were never turned away or asked not to participate.  At some outdoor show when I was very little, I remember Mike Cherry from The Bel Airs let me climb onstage to hit his snare drum. That was a thrill.

HN: When you were a guitarist for Ember Schrag, could you have conceived having such a songwriting-oriented project of your own?

GV: I could not.  I was content in a supporting role. She’s brilliant. I’ve always been happy to augment or enhance what’s already there, if I think I can. Jack Hotel wouldn’t even have occurred to me as a possibility.

HN: Tell us about the addition of Casey Hollingsworth to the band.

GV: We love Casey! I met Casey’s other band, Bud Heavy and the High Lifes, at a Highlander House show back in March of 2013, and they became fast friends.  We did a lot of busking that summer. Casey sat in at a few shows, and when he kept coming to practice every week, we were arranging songs around him and getting his input exactly like he was in the band. He’s instrumentally versatile, has a beautiful ear for harmony, and puts an artist’s stamp on everything he does. It was an easy choice to add him in an official capacity, especially as we arrange newer songs and he becomes even more intricately a part of what we’re doing.

HN: What was a favorite part of the Nebraska Folk & Roots Festival this past weekend?

GV: More than anything, it was a joy to see my friends. I got to play electric guitar with The Bottle Tops. John Walker and the New Hokum Boys were their usual charming selves. Matt Cox, a new addition to Sower Records, played an outstanding solo set at Vega. Gerardo was great in the Market. It’s always fun to see the crowd react to Evan’s voice. Brad Hoshaw and the Seven Deadlies are impossibly smooth. Our friends from Austin, Union Specific, got moved to the outdoor stage, which was perfect. Bud Heavy and the High Lifes and their half-naked sing-along on “Down in the River to Pray,” which had Max slapping his sweaty chest in between verses to keep time, might have been my favorite.

HN: Your most recent album is a set of short stories about different characters. How is this songwriting style different from what you’ve done before or is it?

GV: To be honest, I don’t really have a previous style to compare it to. I think in stories, which require characters, whether those characters resemble me or not, or whether they’re even people.

HN: Which character resonates with you the most?

GV: I’m probably fondest of the woman from “A Better Angel.” She’s running from something, and more and more I think she makes it.

HN: If you could collaborate with any other Nebraska band, who would it be and why?

GV: This town is lousy with good bands. Maybe John Walker and the New Hokum Boys. I grew up listening to John’s records. He’s the best.