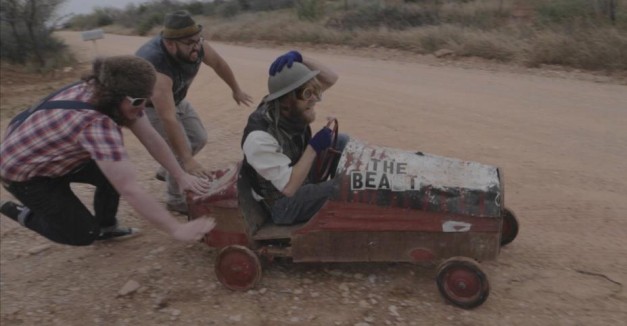 An impromptu round of busking on O Street, a Duffy’s performance and local musician Jon Dell’s stoop helped cement Lincoln as a favorite tour stop for Union Specific.

After failing to initially land on a Duffy’s Tavern bill during a previous tour, the group ran into Dell — who plays in Bonehart Flannigan and Universe Contest and books shows for Duffy’s — at a coffee shop and he offered to let them play at his house. The jam session with local Lincoln musicians, including members of Bud Heavy and the High Lifes, led the group to perform on the street outside of Duffy’s before eventually playing in the bar’s beer garden later that night.

“It was one of those musical moments that happens every-so-often on tour,” says Tyler Wallace, lead guitarist and vocalist for the Texas-based roots-rock band.

“They’ve been so nice to us and treated us so well, we just consider them a huge connection,” Wallace says. “In fact, we even kicked around the idea of doing a split 7” with them, kind of a ‘Texas Loves Nebraska’ sort of thing.”

Currently on a three-week national tour, the band’s Nebraska friendships helped them land on the lineup for the Nebraska Folk & Roots Festival where they will follow headlining act Wild Child on Vega’s stage at 9:15 pm Saturday. Tickets here.

The Americana group first formed in 2008 when singer-songwriters Wallace and Gregg Maher began playing together in college in Sherman, Texas. Since then, the band — which also includes upright bassist Kim Taruc — has released two full-length albums and toured nationally. Wallace says the band especially loves touring the Midwest where they find the people to be friendly and audiences find their music relatable.

“It kinds of finds its way into the writing,” Wallace says.

The music is filled with fast-paced, crescendoing harmonies, slow-moving ballads and Texas-centric lyrics, such as those from the beginning of the album’s title track:

“As they walked down Sherman’s main streets, slurring speech but only the truth, well they spoke of reason, they spoke of treason and the prospects of beatitude.”

According to the band, Murderlights is a slice of the Texas dive bars from which it was birthed.

Following Murderlights, the band released their record Diesel Engines and Kerosene Visions in 2012 after a successful Kickstarter campaign.

Wallace says the band will release their Converse Rubber Tracks Sessions, a free recording studio program from Converse for emerging artists, as an EP soon and a new album in the next several months. The album, which Wallace says will be called Howlin’ Room, will showcase a more raw, intimate Union Specific than heard on previous records.

“As we’ve toured we’ve stripped it down and we wanted the next album to reflect that,” Wallace says.