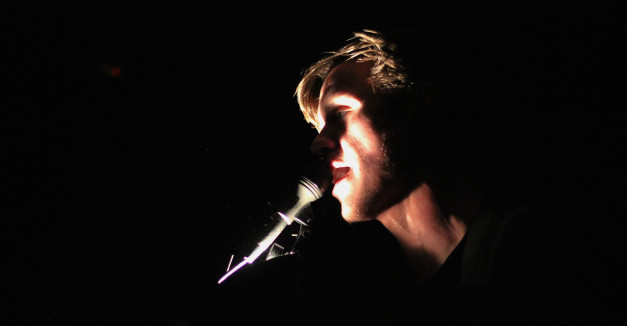 Two years later, that may still be true. The rock band, beloved by followers for its violent and tasteful combination of guitar melodies and lo-fi anguish, has played quite sparingly the last year or so, split between Lincoln and Omaha. Its debut songs from two years back remain a captivating mess, with a few demos stacking up behind them on Gordon’s SoundCloud page.

Gordon returns from a brief bout of inactivity this Friday for the third week of Hear Lincoln. The ten-week summer concert series is held at noon each Friday at 13th and P. Hear Lincoln is presented by the Lincoln Chamber of Commerce and is sponsored by the Cooper Foundation. Media support comes from Lincoln’s community radio station, KZUM.

Ahead of the show, we spoke to Gordon singer Aaron Parker about what the band has been up to, whether he likes playing solo (he does not) and when he realized the power of his voice.

Hear Nebraska: Of the things I like most about the recordings from a few years back, I think it’s the contrast between needling guitar lines and sorta unrestrained ferocity. Way more than loud and less loud, it’s the precision and the imprecision that’s cool. Does that come from different tastes working within the band?

Aaron Parker: Everyone in the band has different tastes in music, but we all have a similar goal in the sound. So far, we’ve just done a terrible job showing it.

HN: What was the first time you realized you could project your voice at a piercing volume? (HN’s audience has seen it, of course, at the Take Cover shows.)

AP: I was at a venue for a show and the PA system completely went offline, so I decided to start trying to ruin my vocal cords by yelling.

HN: Speaking of, do you like playing solo or is it a little harrowing? Seems like you dig the sonic exposure and the emptiness, but that’s nowhere in Gordon’s songs where the voice is usually part of the noise blanket.

AP: Playing solo is probably the worst thing ever. I hate having everyone’s soulless, beady eyes staring at just me. It’s awful. I’d much rather prefer to play full band. I’m able to fuck up a lot more without it being noticed.

AP:  I don’t ever feel like it’s a job to do anything up there, but play music. If other things happen, then they happen. I do love to confuse people though.

HN: What have you guys been up to the last year or so while playing sparsely? Any plans on the Gordon horizon? What should HN keep an eye out for?

AP: We’ve been lazy the last year or so. We’re in talks to record an EP with a local superstar. That’s about it!