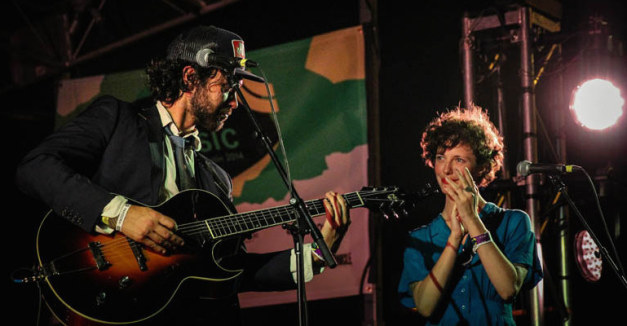 Esmé Patterson has undergone big life changes since her last visit to Nebraska for the Folk and Roots Festival this past summer.

In July, she took the Railyard stage with her band of eight years, Paper Bird. A couple months later, she decided to depart the band and focus on her solo career. Then, she moved away from her home state of Colorado to Portland, and she is currently wrapping up a tour with Alejandro Rose-Garcia of Shakey Graves. Next up, releasing her third album.

Patterson and Rose-Garcia first met while he toured with her previous band Paper Bird. From that, a friendship emerged which led to the writing and performing of three songs on Shakey Grave’s new album And the War Came, released in October through Dualtone record label. With “Big Time Nashville Star” being Patterson’s favorite for athletic vocals it requires, she also lent her voice lyrically and conceptually to “Dearly Departed” and “Call It Heaven.”

Their voices weave together in harmonious melodies with a hint of twang. Listening to those three chemistry-driven songs is the equivalent of hearing a smile. “Dearly Departed” is emphatically free-spirited with hand claps, melodic oh’s and ah’s and moments of speaking the lyrics rather than singing them. In a brief interview during a session at the Pandora House, Rose-Garcia described the mixture of their voices as “simple and jaunty 50-70’s music.”

Patterson’s background is collaboration. For eight years, she composed albums with Paper Bird which included six other musicians, and this year she joined Rose-Garcia in the writing and recording process. While working with others has become second-nature, it doesn’t excite her in the same way as working alone.

While she will be performing alongside Rose-Garcia Tuesday night at the Waiting Room, Patterson will also be opening the show with songs from her sophomore album Woman To Woman.

This seven-song record addresses characters from seven popular songs including Dolly Parton’s “Jolene” and Townes Van Zandt’s “Loretta.” Patterson viewed this as a healing exercise and an outlet to breathe out frustration over being unable to tell the side of her own story in past relationships.

In her song “Bluebird,” she responds to The Beatles’ character “Eleanor Rigby.” When reimagining a second side to this story, Patterson was thinking about different silencing agents that affect people. In the original version, Eleanor Rigby is actually silenced by death, not an ending relationship or space and time – death. Rather than looking at these final moments of her life as utterly lonely, Eleanor Rigby adopts a courageous disposition – unafraid of death as she enters her grave with peaceful resignation. It is the cycle of life, according to Patterson.

“I was thinking about a person in her position who knew they were going to die any day. They would just put on makeup even if they knew they weren’t going to see anyone and look out the window,” Patterson says. “Maybe that didn’t have to be a lonely perspective. Maybe she was just at peace and had all she needed.”

This album steps away from the autobiographical songwriting of her first album All Princes, I, where she addresses ghosts of past loves. Instead, she adopts the role of storyteller to tell stories not her own. For Patterson, songwriting is often very personal, and so exploring different female perspectives was a refreshing experience. However, when looking ahead to her next album to be recorded in the spring, she plans to return to the telling of her own story.

The studio is a realm of intense excitement for Patterson, and she is eager to dive back into recording. With the foundation of lyrics already laid, she looks forward to allowing the melodies to take whatever shape they choose.

“I work really well under pressure,” Patterson says. “Kind of like tomatoes. They need a stressful environment to grow. I think I’m the same way-stressful situations are good for me. I love what that sort of pressure brings out of you, and how you can surprise yourself when you’re put on the spot.”

As a year full of changes wraps up, she anticipates the upcoming creation of this new album, but she also reflects on lessons learned and discoveries made.

“I’ve been embracing the cycle of birth and death and creation and destruction and learning to get tumbled in the waves and stay intact,” Patterson says.

Amidst this time of transition, Patterson meditates on what is truly important and vital in life. The answer differs for every person but the question is the same.

“There’s a funny thing people say: If your house was burning down, what would you save?” Patterson asks. “But in times of destruction and starting over, what do you run back into the fire to save? I’m kind of piecing that together for myself.”