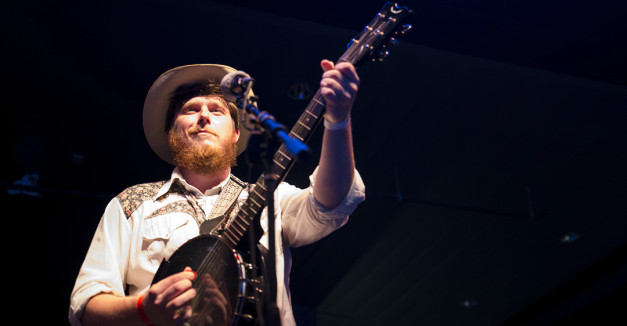 The sound of strings rang out from 5 p.m. until after midnight.

A crowd clad in local band t-shirts, suspenders and denim filled the outdoor space Friday night for the Nebraska Folk & Roots Festival. It felt like stepping into a huge family reunion. Old friends caught up to support veteran bands like Tijuana Gigolos and Sandy Creek Pickers, while discovering newer musicians, like Samantha Harlow and Matt Cox.

A man, with graying hair and a turquoise beach button-up covered in palm trees, sipped a beer.

“Are you planning to stay for the festival?” asked one of the volunteers.

“We’re just going to finish drinking,” replied the man. “And that could take three or four hours.”

Laughing, he and his three companions purchased wristbands while cheering on bongo player and old friend Tony Meza of Tijuana Gigolos. The crowd stayed seated on the picnic tables a few yards back from the stage snapping photos with flip phones and digital cameras. A few folks mustered up enough courage to sway toward the stage.

While the Railyard stage housed rock-n-roll country music, melodic acoustic sets filled the first half of Friday’s lineup at Vega.

“Our toe-tappers are rare,” said Dan McCarthy of McCarthy Trenching, near the beginning of his set.

With a guitar and an upright bass, McCarthy and bandmate James Maakestad only occupied a few feet of the Vega stage, the height of the bass looming above those seated. Once they began strumming, their music rose, filling every inch of the ominous space. Their set included “Wedding Song” about starting a family bluegrass band, and “To An Aesthete Dying Young” threw in a train reference. McCarthy Trenching hushed the increasing crowd with in-sync harmonies between their vocals and their stringed instruments.

As the sun set and the evening cooled, the music picked up tempo and people embraced their dance moves, good or sloppy. Orion Walsh encouraged crowd participation, inviting people up on stage to sing “I’ll Fly Away.” This act broke the boundary between performer and audience as one crowd goer strummed the washboard and a choir of other crowd members belted out any words they knew.

The Railyard began buzzing harmoniously with Walsh’s kazoo, and a kid in tie-dye danced up front along with a lady sporting a pink Wonder Bread t-shirt. People sang along. The music rose above the buildings boxing in the stage, inviting people on the streets to stop and listen, whether for a song or a set.

Hailing from Nashville, The David Mayfield Parade performed with no limitations. The room was their stage and the tables doubled as drums. The overwhelming personality and quick guitar skills of lead vocalist David Mayfield coated the entire room, while the bassist’s purple curls and acid wash jean skirt mimicked her stage presence: cool and confident.

Producing an energetic performance appeared effortless on their end, and Mayfield never tired as he jumped onto amps and then off the stage, falling to his knees as he wailed into the microphone. The crowd felt more exhausted than him by the end.

Evan Bartels & the Stoney Lonesomes closed out the first day beneath the blue green haze of the lights. With a more subdued performance than the band before them, they gathered a tight crowd with their two guitars, a bass and a harmonica. They sang familiar stories, like many artists that night. Tellings of lost love, traveling from California to Nebraska, life lessons, and whiskey resonated throughout The Railyard, asking people, young and old, to reflect on their individual pasts.

“Does anyone have a smartphone?” inquired Bartels, with no response from the crowd. “This really must be a folk and roots festival.”

Brad Hoshaw finally hit the nail on the head.

Most every performing act during the weekend Nebraska Folk & Roots Festival thanked the organizers in some way. Touring acts mentioned how cool it was to be welcomed into such an infrastructure. Local musicians appeared thrilled to play the biggest physical stage on which they’d likely ever performed.

But Hoshaw, with his Omaha band The Seven Deadlies, spoke most astutely to the Lincoln-specific flavor of the entire event, the entirely untailored whoops for most every act, the all-out appreciation for a general aesthetic that can pack the Zoo Bar several nights a week.

“I’m from Omaha and I love Omaha, but I’m not sure they could do an event like this,” Hoshaw offered, before capping his booming rock set with “It Falls Apart,” the closer from his February release, Funeral Guns.

It was vibe bastioned by organizers Spencer Munson and Mike Semrad vaulting repeatedly onto the mainstage to bellow thanks after sets concluded, eliciting long and loud cheers from the audience. (Jeremy Buckley organized the festival, as well, but without all the jumping onto the stage.)

That was the necessary pep to turn The Railyard, which left to its own bourgeois blankness can feel a bit like a wedding reception venue, into an environment befitting of drinking beer for 8+ hours and noisily appreciating the wide breadth of what constitutes roots music.

As the headliner, Wild Child represented the most contemporary and the most bubblegum take on folk music. The six-piece skipped through the up-tempo ditties of their new album The Runaround. Alexander Beggins’ audible ukulele was at the center of everything, but with horns and bass elevating it all. At the end of the set, Beggins and co-singer Kelsey Wilson waded into the standing crowd of probably 150 for an un-amplified performance of “Pillow Talk.” 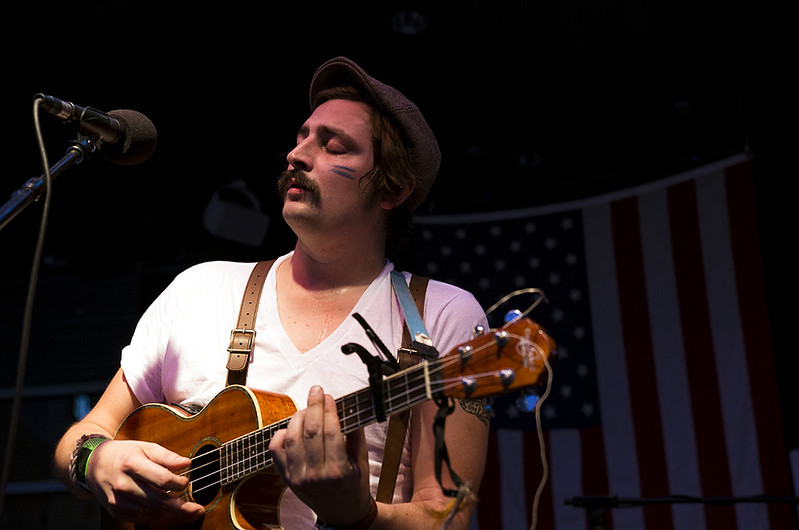 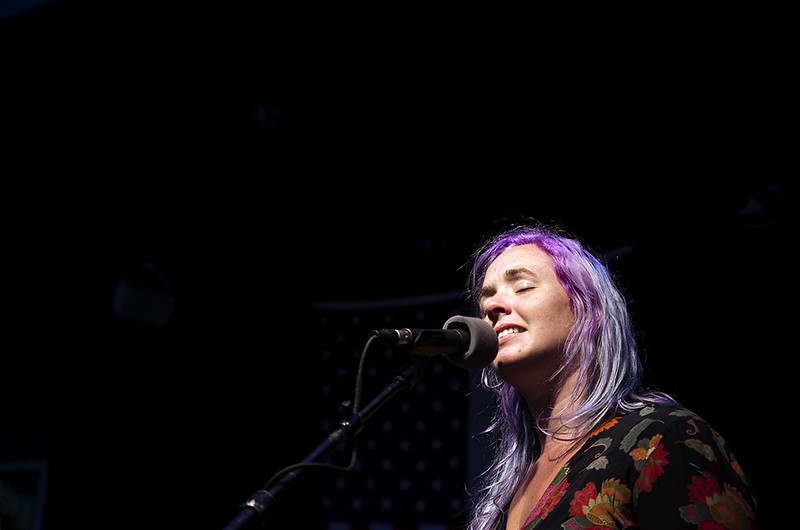 Austin Lucas, whose set was moved up on Saturday because his band couldn’t make the trip, performed upstairs at Vega, with a personally charming, but musically vicious, set. All the while, his dog, a lackadaisical boxer, looked on as Lucas — whose Lincoln tour stops date back more than a decade — rammed through acoustic guitar riffs he both expertly nailed and, touchingly, couldn’t quite execute. When he erred, he threw back his head and pleasantly huffed off-mic, like he was heckling himself for missing notes eight-through-12 of a 16-note lick. It was the wild strumming and hammering of the low notes on the guitar that most betrayed his punk background, and yet, there was no one at the festival doing a better Hank Williams nose drawl.

As evening waned, Jack Hotel relished on The Railyard stage, and props to Vessel Live, as that set sounded as clear and differentiated on the parallel balcony 200 feet away as at the foot of the stage.

The staggering of sets worked well throughout the weekend, with 15-minute overlaps in the vein of a mini-Lincoln Exposed where you could conceivably catch one third of every set. But no one benefited more from great timing than Bud Heavy & The High Lifes.

Though their start time was delayed about 30 minutes to account for the end of Wild Child’s set, the organizers directing the Railyard crowd immediately up to Vega put 200 people in the room when they began. The story of Bud Heavy has always been one of former punk and hardcore kids turning to folk out of some love of old-timey lineage. But on Saturday that story was confirmed by empirical proof. They created what any observer would have had to describe as a mosh. Their set closer, “Night Train,” was a kind of ruthless, speeding folk that whisked their normal “solo-jam-solo-jam” song structures by in a flash. Feeding off the crowd energy, three members of the band doffed their shirts overcome by the moment and the heat. (Emma Nelson, their fiddler, modestly snarled and rolled up her t-shirt sleeves. Punk rock.) Then they led the room in an a cappella version of “Down In the River To Pray,” a traditional hymn reinvigorated by the O Brother, Where Art Thou? bluegrass revival.

Just another marker of the extended comfort musicians appeared to feel throughout the weekend. When things were going well, everyone knew what to do. Leave the stage, invite other people onto it, dispense with your instruments entirely.

That was the lingering aura — it was the sort of festival where, if you broke a string, every third person in attendance could’ve given you their spare. If you needed a harmony, the person cheering the loudest could easily become your third, your fifth.