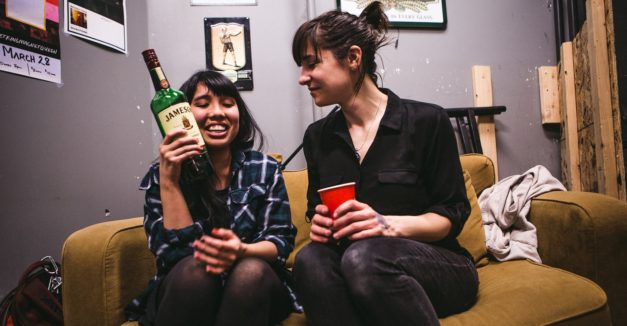 When we asked Sara Bertuldo to participate in our latest Crossfade interview series (her second run), we knew it would be light. But could we have predicted harmonized television jingles and the stoner-rock potential of Mannheim Steamroller?

Back up a second. That interviewee, Laura Stevenson, was on tour this past spring in support of her disaffected-yet-bubbly fourth studio album Cocksure, out last October on Don Giovanni. Throughout the record, Stevenson wraps antipathy, anxiety and self-deprecation in edgy power pop so spirited as to make you forget the dourness of its subject matter. It’s a leap from the singer/songwriter-ness of 2013’s Wheel, no doubt aided by album producer (and former Bomb The Music Industry! bandmate) Jeff Rosenstock.

So Stevenson was in Lincoln on a Friday night in April, with See through Dresses playing the opening slot. The two had shared the road during Tim Kasher’s Adult Film tour in 2013, when the Bertuldo played base in his band, so perhaps some measure of chemistry could have been anticipated.

How much? In the green room after the show, Bertuldo quizzed the songwriter about her favorite wrestling “diva” and the worst thing she’s ever heard from the audience. Watch the interview below.