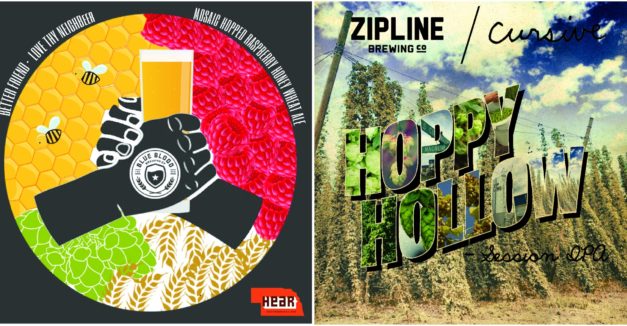 HN has assembled the following mouth-watering primer to get you ready. To start, all five limited edition creations — two of which were brewed with a participating band in mind — are described below.

Roof Reacher Rye Lager
IBUs – 18
ABV – 5.4%
We love Rye and we love lagers so we thought we needed to make a Rye Lager.  Made with a very large percentage of Rye, it is the star of the show.  The unique bite of Rye bread mixed with the smooth and easy drinking nature of a lager make this a great beer to kick off fall.  Don’t mind the haze, that is just Rye doing its thing.

Love Thy Nieghbeer (A Play on their song title Love Thy Neighbor)  It is a Mosaic Hopped Rasberry Honey Wheat Beer.
ABV: 6.0%
IBU:  23

Carpe Brewem – Barrel Aged Imperial Mango IPA
OG = 17, IBU = 90, 7.8% alc/vol
The winner of our winter Beer Quest home brew competition in 2011, we’ve fielded repeated request for this home-grown beer ever since, leading us to start producing it full time in 2014.
Late in 2015 we lucked into some beautiful French-oak barrels that had previously contained California Chardonnay – we knew right away we wanted to fill them with the Mango.
Bursting with white-wine, oak and tropical hop character in the nose, this beer presents sweet fruity-malt upfront, juicy-mango-hop in the middle and lingering dry-white-wine and oak finish.  While we add a touch of Mango extract to our regular version of this beer, we find the Chardonnay barrel and Mosaic hop character in the barrel aged version present all the fruit character needed.  Imperial Mango IPA, keeping fruit beer cool since 2011.

Beer Nebraska is all about the shared creative passion of bands and breweries. We are excited to announce our collaboration with Cursive, HOPPY HOLLOW! Bursting and blooming with hop aroma and flavor, this session ale is an homage to the band’s album Happy Hollow, which was released 10 years ago this month. Brewed for exclusive release at Beer Nebraska.

In the spirit of the event, we asked each band and brewery why supporting homegrown is so important. Then, we challenged them to pair themselves with another locally-created product. Their answers are below.

NB: It is a no brainer for us, we are homegrown both in business and life. A local culture is one of the things that defines a community and gives it an identity. Homegrown businesses and artists also contribute to the economy locally and that money as well as culture turns over multiple times in the community and state and in the end makes it a better place to live.

Music and Beer and asking what is the best or best pairing? This is a very personal decision often times based on the moment. That being said I can’t think of anything better than an IPA to go with the sounds I hear from Better Friend. An aggressively hopped beer paired with some punk rock like tunes seems like a home run to me. Picking the best Nebraska IPA for that is even tougher so I will take the easy route and go with ours, Frame the Butcher IPA. It is a good mix of throwback IPA flavors blending some current hopping techniques that seem to compliment what I hear from Better Friend and how they do very similar things in their music.

BF: We think it’s important to support homegrown efforts because it’s where the best things start from. Businesses like Zipline and Blue Blood exist because of a passion within our community to make something different and better than the ordinary. Just like with music, if you don’t provide support to those on the ground floor, you’ll never get to experience what they’re able to blossom into. Without local support would Zipline be a major brewery in town, expanding their market each year into new cities and states. Plus there’s a certain sense of pride in something good coming from the place you call home. To know the place you’ve planted your roots has produced something excellent.

BF: We all love Thunderhead‘s Cornstalker. It’s a dark wheat ale out of Kearney, Neb. You don’t find many of them around here, because they’re apparently kind of hard to make. We like the contrast of dark and light with the flavored Cornstalker has. And appreciate the risk as a local brewery to try something differ bet even if it’s a challenge.

It’s important for us to support something homegrown because we are homegrown. At the foundation of our core we believe in community. Part of that is doing everything we can to help develop local businesses, artists, agriculture, etc. as a whole. After all, when one of us succeeds we all succeed, and considering how dependent on one another each of us is as community members, anything we can do to support the growth of something local is something we want to be behind. Not to mention we’re huge music fans!

Well, for this I have to go with the band we collaborated with for the event, Better Friend. It’s truly been a pleasure getting to know them all. They have very laid back personalities but their music carries a great intensity that you may not expect after sitting down and having a beer with them. Knowing that they are fans of wheat beers, especially dark ones, I’d have to say  that the beer we would pair them with would be our fall seasonal, Two Gun Brown. I go with that beer because it is a very smooth drinking triticale brown ale that packs a bit of intensity on the pallet. Triticale is a rye/wheat hybrid grain that we source locally, so the beer has that laid back mouth feel of a wheat beer with the intensity of roasted nut and light rye spice on the finish. For us it compares perfectly with the laid back intensity of Better Friend!

Things like brewing beer, or even playing music around town, are a labor of love. We’re lucky enough to live in a community that shows interest and supports these efforts. This allows our brewers to grow and perfect their craft.

If CvC were a local Nebraska beer, we’d be a Hibiscus Saison from Zipline here in Lincoln. Refreshing yet quirky.

Supporting local beer and music is important, because they give the community something to take pride in, and enjoy.

I would compare Empyrean’s Long Route Peanut Butter Porter to Universe Contest, because they’re both different (in a good way), and they both leave you wanting more.

It’s important to support homegrown things because the community would have zero chance of progressing without it. Specifically look at Zipline, in a few short years they’ve become a staple statewide due to all of the local support and excitement…and a great product. The same goes for any type of creativity or entrepreneurship, without a base a product serves no purpose.

The beer we pair best with I can’t talk about because [REDACTED]. If I had to pick a runner up, it’d be Zipline’s Hibiscus Saison. We look pretty and taste great too.

Why Support Local? It’s simple. No matter who or what you are supporting these are the people and ideas that build an evolving identity and add character to your local community. Supporting them and their endeavors give you an opportunity to promote uniqueness and the potential to help create a movement. Plus, they are your neighbors!

I think Universe Contest and our Thug Passion Berliner Weisse are a good pair. Much like the artists this beer uses traditional elements and concepts but tests modern perspective to simultaneously accomplish something familiar and new.

Some similarities to note….

Name: Thug Passion? Universe Contest? Both titles beckon “What is this going to be?”.

Appearance: This brew is bright, pretty and very easy on the eyes – sound like a familiar set?

Character and Flavor: A classic, dependable base beer style reflects the comfortable rhythms and melodies Universe Contest utilizes while the modern kettle souring practice and additions of non traditional fruits are representative of the unique character and experimentation derived through unbridled collaboration.

Finish: No, let’s do one more.

HN: Why is it important to support something homegrown within one’s own community?

SP: The question answers itself! Supporting your own community is an end/good in and of itself. If the byproduct of that is folks enjoying some heavy rock and tasty beer, then that’s even better! On a more serious note, it’s critical that we/I support our homegrown talent because no one knows that talent better than the folks who live it, write it and experience it on a consistent (and often intimate) basis.

SP: I do not know much about beer, let alone Nebraska beer. But, I am old enough to have experienced the renaissance of Nebraska-brewed beers and spirits. For the same reasons I enjoy supporting the local music scene, I enjoy imbibing a home-brewed . . . brewsky; i.e., I get extra satisfaction when I support the home team!

TK: The answer here is fairly obvious, but rather than suggest that we (Cursive) are supporting something homegrown, I’d like to offer how proud we are to be affiliated with Zipline, as we are big fans of the brewery. Conversely, I appreciate Zipline taking an interest in us as a fellow small business based out of NE.

TK: Haha, I really struggle with this idea of pairing beers with music! Perhaps, a mid level stout would be appropriate. Stronger, thicker than Guinness, but certainly not as heavy as a Scotch Ale…

Have to go with Cursive on this one. They’ve been a favorite of mine for over a decade so it was exciting to have a chance to pair the musicians beer taste with our own. We collaborated on a session IPA called Hoppy Hollow. Not just any run of the mill swill, but an amazing tribute hops that will make sure you are enjoying the show not only for the sound, but for the taste as well.