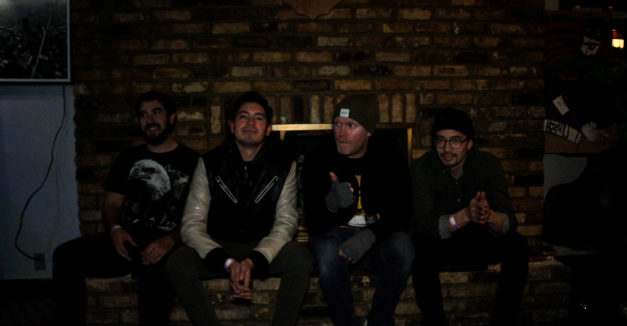 It took a leap of faith for Lawrence Deal to join Jump The Tiger. The blistering guitar lines and pounding rhythms developed by guitarist John Claus and drummer Scott Micheels lay outside his personal musical bubble.

But if he’s worth his salt, he thought, couldn’t he figure it out?

“When I heard it, I was like, ‘That’s not really what I would do,'” Deal explains, seated with his bandmates at a dingy booth inside Brothers Lounge. “I took it as a challenge, to reinvent myself a bit and branch out.”

One can sense that intention in the Omaha rock band’s music, but as they quip later, Jump The Tiger is all about the mighty riff. Claus and bassist Dave Backhaus practically crash into each other, both influencing and anchored by Micheels furious playing.

Most importantly, they’ve meshed well in their three-year run, which has led to a debut EP this past July — with a wrecking ball of a single in “Part of the Problem” — and regular gigs about town. Hear more from the band in our latest artist profile: