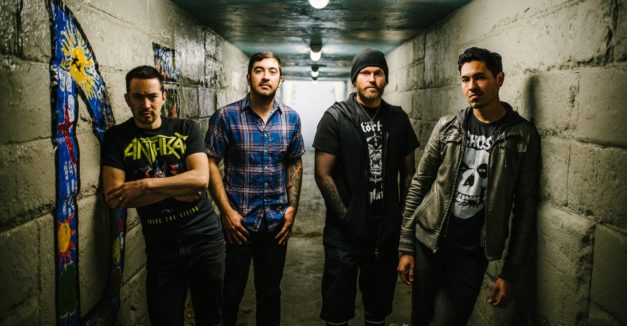 There’s a distinct untouchable feeling that comes with flocking 12 friends deep, the same kind with which Omaha band Jump The Tiger rips off breakneck riffs in its new video. Whether simply bar crawling, street skating or causing actual trouble, there’s a reassurance in the company that produces a kind of recklessness.

The four-piece hard rock outfit puts in on-screen in its video debut “Part Of The Problem,” found on the band’s debut EP Nightlife, which releases today. Amidst a heaping helping of speed riffing from guitarist John Clause, frontman Lawrence Deal posits that maybe his posse (which provides backing vocals) befits the title. The attitude with which it’s delivered and the manner of their rolling through the streets of Omaha suggests they believe it.

“We wanted to address the idea of us being ‘part of the problem,’ so we figured a group of friends being up to no good on the street would represent it well,” says the band via email. Omaha filmmaker Aaron Gum captured the Benson and Keyboard Castle Basement scenes in May. “Rolling around was just a fun alternative to walking or driving, and I think we all enjoyed remembering how to skateboard again.”

For those unfamiliar, Clause and drummer Scott Micheels started Jump The Tiger in late 2014, enlisting bassist David Backhaus shortly thereafter. It continued writing as an instrumental group until Deal joined last summer. They have since developed a sound that melds elements of classic/stoner rock and metal.

Jump The Tiger celebrates Nightlife next Saturday, July 23 at Slowdown with Timecat and For The Birds. RSVP here.

Watch “Part Of The Problem” below:

Though he’s no longer an Omaha resident, Tim Kasher is still representing his hometown musical roots — today, in playlist form.

The Good Life/Cursive frontman appears on the latest edition of artist-curated musical podcast Sad Punks, crafting an all-Omaha playlist of tracks that have influenced him in the past and moved him in the present.

Kasher’s picks are notably influenced by his own Omaha connections, something he explains briefly at the outset. His list includes older tracks by Cursive bandmate Ted Stevens’ Lullaby For The Working Class  and Orenda Fink, as well as a deep Bright Eyes cut. He also adds newer songs by McCarthy Trenching (“50 Times A Day”), Simon Joyner (“You Got Under My Skin”) and Anna McClellan (“Fire Flames”).

Sad Punks was launched in March of this year, enlisting Screaming Females’ Marissa Paternoster as its first guest. Since then, it has seen appearances by musicians, journalists and industry workers. Notables include Burger Records’ Sean Bohrman, The Thermals’ Hutch Harris, Worriers’ Lauren Denitzio and The Talkhouse editor Brenna Ehrlich.

Find them all here, and listen to Kasher’s episode here.

Speaking of McClellan, the Omaha singer/songwriter plays Brothers Lounge, 3812 Farnam St., tonight with Collin Duckworth & the Trancendental Lovers (or is it Sophie Hug & The Kisses? or Nathan Ma & The Rosettes?)  It seems as though there are a lot of questions here; answer them at 9 p.m., $5 at the door. RSVP here.

Across the street at Duffy’s Tavern, 1412 O St, a pair of Lincoln electronic bands in Omni Arms and Powerful Science perform for $1 Beer Night. Those tallboys are cheap, so be sure to support the bands with donation at the door. RSVP here.

View a fuller listing of this week’s show at our statewide calendar here, where you can also add your own events using the top-right “contribute” button. Send all news tips, story ideas and HN Radio song submissions to news@hearnebraska.org.