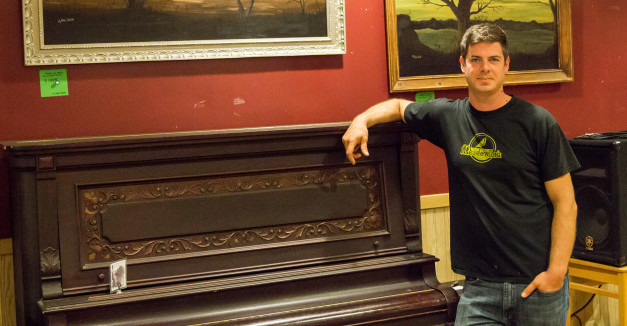 [Editor’s Note: We’ve been in the habit lately of asking people in and around Nebraska music scenes to recall their favorite all-time shows for us. Below, you’ll hear from Adam Hintz, co-owner and longtime show booker for Lincoln’s Meadowlark Coffee and Espresso. Adam’s also heavily involved in other community institutions, as the president of Friends of Wilderness Park and as a host of KZUM’s Earth To Lincoln program. Hintz is also currently running for a seat on the Lower Platte South Natural Resources Board. Now, let’s turn it over to Adam.]

I’m guessing everyone reading this has a passion for local music.

We all have different reasons why we enjoy hearing the folks from our communities. I’m the type of person you could call “hyper-local.” I don’t really enjoy big arena shows; I’d rather see the expressions on the musicians’ faces, and I find house shows especially beautiful. Much of this came from listening to a particular show on a now defunct radio station out of Omaha in the ’90s — 101.9 The Edge’s “Basement Tapes.”

How I found this show is a good story and I’d love to share it with you some time in the real world, but for now let’s just say, that for my sixteen-year-old self, Sunday night’s where sacred. It was an hour show, and from 9 to 10 p.m. I’d record each show and listen to it in my car over and over again. I’d listen to them on my way to and from school and on my evening excursions from my home outside of Hickman, Neb., to The Coffee House in Lincoln. I’d catalogue each song, artist and album in a notebook. In this notebook, you’d see names like Turtle Moon, Blue Moon Ghetto, Commander Venus, Lullaby for the Working Class and Mercy Rule.

Being underage at the time, it was always a challenge to go and see live music. I’d always have to be on the lookout for all ages shows. Often, I’d find myself at The Coffee Connection (where Sultan’s Kite is now), The Antelope Park Band Shell, Knickerbockers or at The Coffee House. The punk shows at Havelock Social Hall where an especially good way to see some bands back in the day and were an amazing thing to have growing up. Of course, there were the house shows: They were like Havelock, but a lot more drunken and rowdy.

All of this was very idyllic for a young man living in the borderlands of Gen X and Y. I relive these moments every time I step into a venue here in Lincoln. Every time, it is sacred.

I want to mention one more thing before I get to the list. Besides being “hyper-local,” I’m also “hyper-ecological.” To me, supporting local music is an ecologically sustainable act. Just as local food is healthy sustenance for our bodies, local music is sustenance for our local culture. The life of this land emanates from the sound boxes, amps and vocal cords of our local musicians. The water from the Platte River audibly washes over us as Ron Wax crunches out chord after chord. The soil makes the kale that helps Nick Svoboda (Black Cohosh) play the bass. It’s all connected. In a hundred years, if humans still exist, local music will be with them.

OK, to the list. As Mark Bestul pointed out in his list, shows aren’t just about the bands; it’s about the community that surrounds it. Some shows on my list are maybe about the artist or the story that goes with the show. Oh, and sorry to any band or loved one I didn’t mention. You are all sacred.

Jack Hotel and Bud Heavy and the High Lifes | Coffee House on the Prairie at Pioneers Park Nature Center | May 16,  2013

This was the perfect blend of performance and place. Bud Heavy’s upbeat folk gave me images of ice cream socials from small towns in the 1920s. As the sun set over the prairie, Günter Volker’s bluesy voice resonated through the starlit void. Pioneers Park Nature Center plans on having these shows every May. Keep your ear to the ground and treat yourself next year.

All of the cools kids from Lincoln and Omaha kind of have a mixer. Omaha kids who are going to school in Lincoln introduce the Lincoln kids to the Omaha scene. Like milk with espresso, something greater is formed. Seeing Desaparecidos was the real draw for me, and seeing the other bands was great bonus. I found myself at the front of the crowd and Neva Dinova was covering a Dead Boys song. I was mouthing the words. At the end of the song/set, the drummer got off of his seat and walked right up to me leaning over the stage and shook my hand. “It’s good to see someone knows the Dead Boys,” he said, filling me with pride. How cool is that!

After Rilo Kiley, Desaparecidos straight-up pounded the stage. Personally, I think Desaparecidos is one of the best things Conor has ever done. Read Music, Speak Spanish came out right at the beginning of the wars in Afghanistan and Iraq, and the album speaks volumes to what we were all thinking and feeling at the time. It was a great release to see those dudes thrash our anger out. After 12 years, this album is still relevant.

This was a reunion show circling around Josh and Anna’s wedding. The whole Trigger Town family was there on a hot Sunday night. It was the first time I heard Bol’d Crow, and I fell in love right away. Imagine the Sirens from O Brother, Where Art Thou? with instruments and a faster tempo. How could you resist! Everyone there was in a joyful, drunken and rowdy mood.

Once Trigger Town hit the stage, The Zoo was in full honky-tonk mode. Ben Gotschall strumming proud with his anti-pipeline “Windmills Not Oil Spills” T-Shirt was especially pleasing to me, making comments about our struggle against the KXL. Seeing Brad Kindler, who had been away for Peace Corps in Africa, playing a tub bass was another highlight. At the end of the evening, when we were spilling out onto 14th Street, my friend mentioned this is why he loves Lincoln. You don’t get this kind of community in most places and that’s why he wouldn’t want to move away. I agreed. We’re all one big extended family.

The whole evening was pregnant with energy. Jumping from venue to venue to see different bands was like a season’s worth of entertainment all rolled into one weekend. This particular Friday night was full of acts I was hungry to see. First, I caught Kill County at Duffy’s which set the bar pretty high. Ringo and Josh closed their eyes when they sang and it gave the set the sense of an opening prayer. As soon as they finished, I bounced over to The Zoo Bar to see Black Cohosh.

To me, Black Cohosh is the soundtrack of Occupy Lincoln. The group is comprised of some heavy-hitting activists, and their music springs from Alex and Jason playing street corners across the country. My first experience with the band was at Farmer Bill’s Kite Party. As they played on the prairie, Bill set it on fire. I can think of no better setting. Their Lincoln Calling show was rumored to be their last, and the set was recorded for posterity. A video projector laid black and white film through the fog, on the band and onto a screen behind them. It was a vision of resilience and determination against the greatest of odds. We all stood there in solidarity.

Then, the capstone of the evening: Universe Contest at Duffy’s. I literally think everyone was there. The guys really make a spectacle of it, all dressed up in costumes and their music has this jungle rhythm that is so pure you can’t help emptying your adrenaline glands. Of course, “Snake Stand.” This band is one of Lincoln’s very best. They hit all of the angles and have fun doing it. Throwing a beer can at them is like giving them a hug. It’s been a pleasure observing them grow, and I’m looking forward to seeing what they bring in 2015!

Respect to Jeremy and his crew.

The Box was closing soon, and everyone was savoring the last drops of the venue. Tim was drunk. Everyone was drunk. We all knew the songs — these albums where our anthems. We all lived these lives together. I’ve never experienced such a complete blending of musicians and attendees. The band was the crowd, the crowd was the band. I was seriously shaking in a shamanic trance. The night could have gone on forever.

This was the moment you imagined when you were a kid watching Seattle explode. The creativity and the community sewn together by vibrations in the air. In a place of Nebraska, by Nebraska, for Nebraska.

photo courtesy of The Daily Nebraskan

I’m not exactly sure this show actually existed, but I know I was there. This was before the smoking ban, and the stage at Duffy’s was near the window. The place was thick with smoke to the point of eyes watering. It really just added to the tone of the night with The Golden Age’s tragic tones of loves broken and lost. I was listening to The Good Life’s Novena on a Nocturn constantly that year to help me get through some very bittersweet choices. Hearing Tim Kasher play “An Acquaintance Strikes a Chord” was dream come true. I think that year was especially confusing and important for a lot of us. The night was an incarnation of that context.

Mr. 1986 brought something so sonically energetic and original, few have been able to hit that place of pure electric beauty since. There’s a language in wordless music that speaks to something instinctive. The same thing that helps us see shapes in clouds communicates a meaning to layers of chords and tempo. With Mr. 1986, I hear stars exploding, light just barely escaping a black hole and flowers blooming. The crowd that night shook and heaved like the texture of space/ time itself. Boiling and bubbling in one moment, washing and waving the next.