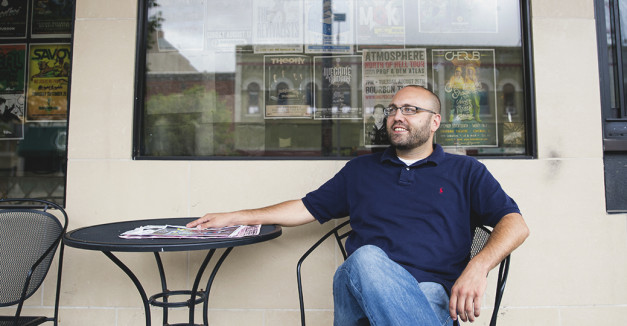 With a Sony discman and an old RCA turntable, Spencer Munson brought Dr. Dre, Outkast and Incubus to his high school dances in Harrison, Nebraska.

Growing up in a town with a non-existent music scene, Munson discovered music through his dad’s love for classic rock and his mom’s taste for Motown and disco. With a shortage of DJs in the area, Munson scoped the internet in search of bands on the rise to share with his peers. In turn, his mix CDs were in high demand in the small town.

Once he moved to Lincoln in the early 2000s, Munson dove deeper into the music scene where he became DJ Spencelove to make the rent. Gradually growing tired of spinning the Top 40 hits at house parties and bars downtown, Munson became a record store hound at the now-defunct Spindle, which is now Gomez Art Supply. There, he met some influential local artists including Saber Blazek of Halfwit, Mark Bestul of Weldon Keys, Jon Dell (Bonehart Flannigan), along with friend and recent Folk & Roots Festival co-organizer Jeremy Buckley.

“The excitement of either selling someone a record they will cherish forever or getting in a new collection of old records to dig through are second to none,” Munson says. “So many people would come in on their work break and just hang and talk about new music and downtown happenings. We ended up turning the basement into a late night speakeasy. We would have bands and DJs play until sunrise sometimes. The best shows.”

The artists frequenting Spindle connected Munson to the now-defunct Lincoln music club Box Awesome, and eventually to The Bourbon, where he currently manages marketing and helps book shows. Recently, that’s been acts like Jamie Lidell, Psalm One and Astronomar, as well as Falcons and Hoodboi coming up. 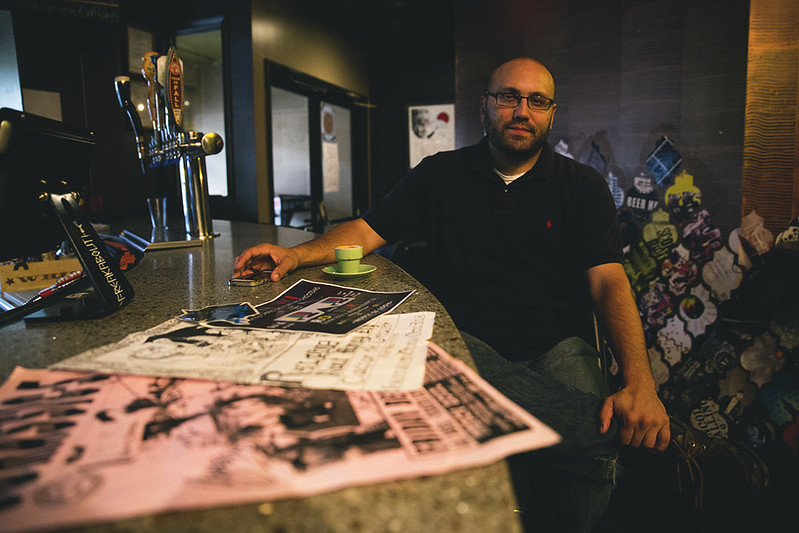 “The Box was home,” Munson says. “You could show up any night and catch something new and crazy. It gave all the local musicians and artists an outlet for producing work they never had before. Every genre was welcome there. Everyone respected and helped everyone else. I was lucky to get the opportunity to work for Jeremiah Moore and develop the relationship we have today in making The Bourbon successful.”

To chronicle it all, we caught Munson on the phone last week as he traveled to Red Rocks to see Chromeo, Cut Copy and Flume. He discussed his most influential concerts, which include a few of his favorite DJs, VIP seats at Daft Punk and an after party with Spank Rock and Ke$ha.

Obsessed with ‘90’s R&B, 13-year-old Munson listened to Michael Jackson, Janet Jackson and Boyz II Men religiously. With country and arena rock dominating the Western side of the state, Munson jumped at the chance to see Boyz II Men in Rapid City.

“There were three gals I grew up with my whole life,” Munson remembers. “My mom wasn’t having it, so I talked their mom into taking us to the show. I’d never experienced lights and a live show like that. It was neat to see everyone freaking out and going crazy over Boyz II Men, who at the time had the No.1 hit in the country. They were so popular that they were playing any and every arena they could get their hands on.”

In 2008, Boyz II Men played the Nebraska State Fair, and Munson made sure he was there again.

As a freshman in college, Munson fell in love with afro-centric, neo-soul hip-hop. Jurassic 5 defined that sound in their newest album Quality Control.

At the time, Munson wanted to be a scratch DJ, so when Nu-Mark and Cut Chemist sold out the Ranch Bowl stage, he studied them keenly.

“They did this crazy turntable DJ set, where they scratched crazy children’s records,” Munson says. “They put guitar straps on kid’s turntables, playing them like a guitar in their hands. As a DJ, I was so blown away by the experimentalism, as well as the playfulness that they had. They played old school hip-hop beats, but they scratched children’s records over top of it. It really influenced me to not take myself too seriously as a DJ.” 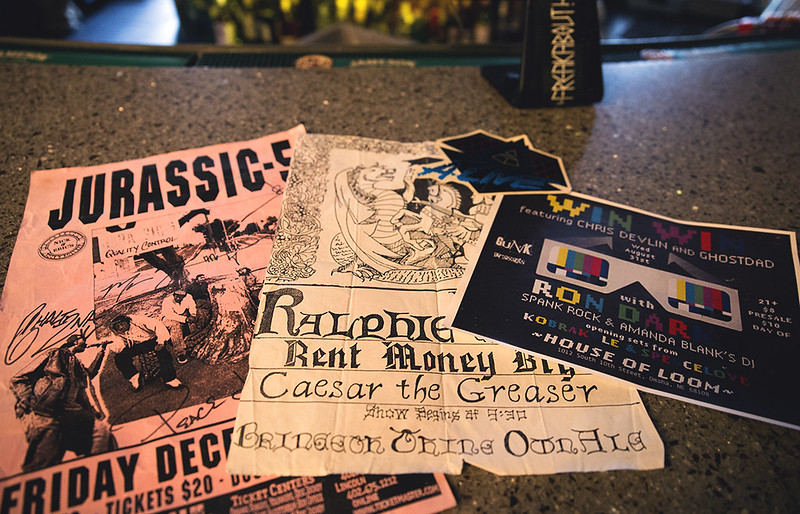 “Rent Money Big was the most rowdy and exciting band that was in Lincoln,” Munson says of the early ’00s Lincoln house show scene.

A mix between Queen’s of the Stone Age and Iggy Pop, Munson’s more subdued college friend Tim Scahill transformed into Rent Money Big as soon as he grabbed the mic.

With house shows at their peak in Lincoln between 2002-2004 (in Munson’s estimation), venues like The Fidel cleared out their living rooms and packed in enough people making it impossible to walk through the house. This night fit the bill.

Approaching the house with a full bottle of Jack Daniels in hand, Munson came ready to party.

“There was a contrast of crazy, hard rock, stoner-metal with Rent Money Big,” Munson says. “Then the Hornrimjobs were this weird, artsy girl group. Finally, you had The Show is the Rainbow, who was insane in his own right.”

Munson came with a video camera, which he attached to a chandelier hanging in the back of the room. While the camera recorded the chaos from above, he head banged in the front row. At some point, someone threw their shoe across the room, knocking the video camera to the floor. Without missing a beat, a fellow head-banger hung it back up and everyone kept rocking out. Munson still owns a digital copy, documenting the night.

“I’d wake up the next morning and my neck would still hurt from head banging so hard,” he says.

Snax, the opener, also impressed Munson — a “weird German guy” who hardly wore any clothes. He sang like Prince and danced all over the stage.

“He was a brand new dude making R&B electronic music as a one-man-band,” Munson says. “Setting up in a half-circle of old synthesizers and a couple different mics, he created these sound effects with his mouth and/or he’d be singing into one mic with one chord and singing into another and harmonizing with himself.”

In between acts, the venue played early dubstep.

“I was enamored by this heavy bass music, followed by the sexy soul of Jamie Lidell,” Munson says.

In 2010, Munson booked Lidell at The Bourbon where he performed with a full band, instead of solo.

“I’ve always loved his evolution from album to album,” he says. “To see someone make all of those sounds solo with such a full sound was impressive. Then to see him step back and take a lead singer role and command and lead a band made me respect him even more as a musician.”

The hype surrounding Daft Punk roared and their American tour dates were rare.

When Munson heard about their show at Red Rocks, he used his entire paycheck to buy ten tickets for him and his friends. Eventually, the number of Lincolnites grew and 50 people caravanned to the mountains to experience the French electronic band.

Three miles from the hotel, Munson’s busted, old mini van broke down. Determined to make the show, he abandoned his car at a local liquor store and hitched a ride with another car coming from Lincoln.

As Daft Punk took the stage, Munson’s friend Marshall danced his way into the VIP section, which had cleared out due to the intensity of the light show. By the end of the show, Munson and 20 other friends stood two rows back from the stage, soaking up a futuristic show.

“Daft Punk commanded the visual on the pyramid and utilized excellent minimal images,” Munson says. “They talked about coming to earth and robot rock, and then they flashed these images of the entire history of humans and human anatomy. They created this concept that they were actually from space.”

After the show, too amped to sleep, Munson walked back to his car, grabbed a small boom box he packed, and burst back into the hotel room at 6  a.m. with Justice pouring from the speakers. The party started up right where it left off.

“This show came about because Ke$ha was on tour,” Munson begins.

Spank Rock was a foul mouthed, electro-rapper from New York and the Council Bluff opener for Ke$ha’s Mid-America Center show. After receiving a phone call from the rapper’s manager, Munson agreed in disbelief to plan an after-party for him.

Having helped throw the GUNK parties at The Waiting Room, an all-ages, house music dance party, Munson booked the party at the new venue House of Loom, unaware of the epic night about to unfold.

People left the hype from the arena show at the door, including Ke$ha herself, who showed up to party sans make-up.

Everyone danced. The party raged. No one left until the sun began to rise.