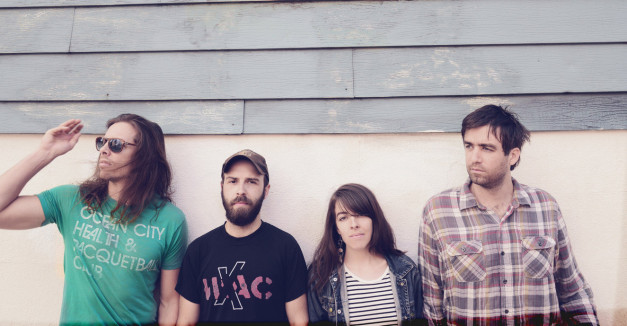 The first, and perhaps more pertinent to Hear Nebraska’s purposes, was pop-rock quartet Twinsmith, which will release its second album, Alligator Years, with the label on May 5. It made sense and probably no one was surprised. Twinsmith is one of the hardest-working and most well-loved bands in Nebraska, and a year prior, Saddle Creek released one of its singles.

But who was that other band? A Philadelphia-based folksy pop-punk quartet named Hop Along. You may know them — Hop Along has been hitting the road hard for several years now, including some stray Omaha stops. But you may not — the band’s debut album Get Disowned was independently released.

Either way, you should know them. Hop Along was an important signing for Saddle Creek, as May 4’s Painted Shut from the band has already generated some impressive anticipation. So far, two songs have been released — “Waitress” and “Powerful Man.”

Listen to Get Disowned here and acquaint yourself with touchstones and trivia about the band below. Then catch Hop Along at Slowdown with Field Mouse and Lithuania on June 4 (RSVP).

Noisey says Painted Shut might be the best album of 2015. “There is no one out there like Hop Along. Not even close. And Painted Shut might just end up being the best album of the year. The secret is officially out,” writes Dan Ozzi. Indeed, the band’s sound isn’t easy to nail down. The Quinlans have said in interviews that the only band they agree on is Pedro the Lion and it shows — Frances’s vocals and lyrics keep their distance from the anthemic couplets that the guitarwork begs. She favors a more folk-oriented shoehorned narrative approach.

Frances Quinlan sent a demo CD to Saddle Creek Records in 2005. Frances posted about sending the demo on the band’s Facebook page before playing a 2012 show at The Sandbox with Places We Slept. Call it prescience, call it dumb luck, but Quinlan and Saddle Creek have both changed immensely since 2005. Quinlan was working on Hop Along as a freak-folk project Saddle Creek was riding a Bright Eyes high. Now Hop Along is playing a blend of post punk and folk-punk and Saddle Creek is diversifying its own portfolio.

Composer Arthur Nevin was Frances and Mark’s great-grandfather. Frances talks about it briefly in this interview. Nevin was an important figure in the brief Indianist movement through the early 20th century. That school of music is loosely associated with American Romanticism and strives to incorporate Native American musical themes into American classical music. Of course, this isn’t so much an integral part of Hop Along-lore as it is a peculiar fact. Hell, let’s make something out of it — Nevin’s approach is not unlike how the Quinlans approach music now: with little regard for conventions of genre.

AV Club’s David Anthony called Get Disowned “nearly perfect.” Although the website missed the boat on reviewing the 2012 record, Anthony did manage a small comment on the album in this article about the band’s Shaking Through session. He writes, “The album is notable for its folk-gone-indie-punk approach, coupled with massive choruses and Quinlan’s personal, soul-crushing lyricism.” If you happened to listen to Get Disowned when it came out, it must have been a thrilling a discovery to hear Quinlan’s wailing, wandering, rasping vocals over jangly guitars, molded into non-traditional song structures.