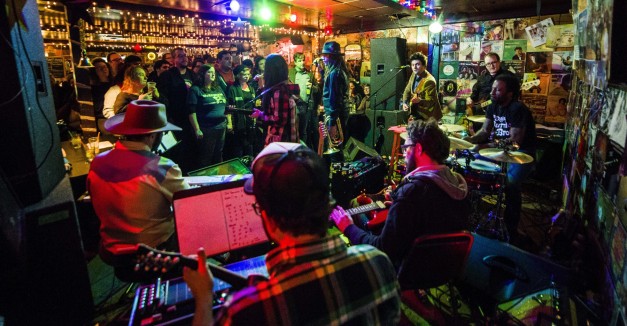 Listen below, and head here for the entire digital library.

Josh Hoyer & Soul Colossal has fired up the promotional machine on the run-up to its latest album release.

The Lincoln soul band premiered the video for “Parts Of A Man” yesterday via Glide Magazine. In the video — shot by HN contributor Andrew Dickinson — Hoyer sits against the brick wall backdrop of Lincoln’s White Rabbit. An elderly couple slow dance intimately at the bar’s front.

Watch “Parts Of A Man” below:

Soul Colossal embarks tomorrow on its 16-day “Soul Of The Mountain” tour through the upper elevations of Colorado, Utah and Idaho. See the full schedule here.

The 11th annual Lincoln Exposed starts tonight, kicking off four nights of live music in four downtown venues. It features 70-plus bands, all from the Star City. As we wrote when lineups came out, the addition of Bodega’s Alley has not only allowed space for more bands, but more intriguing, genre-mixing lineups. Weekend passes are $20, and there will also be day and venue pass options. See tonight’s schedule below, and RSVP here for the entire weekend menu.

In Omaha, Godspeed You! Black Emperor will take the Slowdown stage. The Canadian post-rock band released Asunder, Sweet and Other Distress last March on independent label Constellation Records. It’s the band’s fifth studio album and second in three years after a decade-long hiatus ended with ‘Allelujah! Don’t Bend! Ascend! in 2012. Though never breaking into mainstream, the band has maintained a strong cult following, which explains why as of yesterday, only 15% of tickets to the show remained. The duo of Greek lute player George Xylouris and New York-based drummer Jim White will open the show. RSVP here.