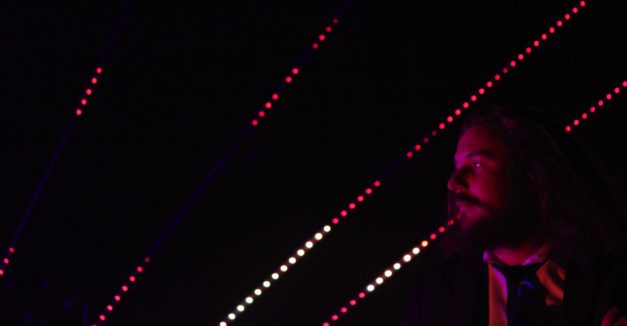 Editor’s note: The following post contains coverage of a project some readers may find offensive. The formerly accompanying photo has been replaced for that reason. We invite readers with questions to email our staff at editorial@hearnebraska.org.

The first of Orenda Fink and Nina Barnes’ “hedonistic celebration of all life’s earthly delights” aimed for just that: a sensual experience with a swirl of sword battles, fake blood and whipped cream. Born of their merging creativity in 2012, the project sought to honor a Japanese cultural figure: the geisha.

“The basic idea was to take something symbolically poignant and turn it on it’s head,” Barnes says. “The geisha’s controlled physical and mental state of being with only one purpose, to please men. Instead we made them into zombies that only focused on their own pleasure — a sexuality that was not afraid to get ugly and only serve itself.”

Harouki Zombi returns to House of Loom this Saturday, with Fink and Barnes (also in Of Montreal) reviving their outlandish cabaret performance for one last run in conjunction with the dance club’s closing at year’s end.

The two became fast friends in Athens, Ga., in 2011, and naturally, searched for a way to merge their respective creative pursuits. Fink’s eventual move to Omaha a year later only strengthened that desire, leading to the first iteration of Harouki Zombi.

“This performance seeks to embrace the female power within, symbolically, and to drive out the very dark forces in present times,” Barnes says. “This is a dance party uprise in a volatile time against oppression in context of the present political and social climate.”

The show, which will also feature an opening DJ set by Todd Fink and a closing performance by Omaha’s Cult Play, will be a fitting send-off for both House of Loom and Harouki Zombi. Barnes and Fink say it’s where they’ve had some of their best shows.

“It is very sad to see House of Loom closing,” Barnes says. “We are forever grateful to have had the opportunity to be part of this cultural slice of history in Omaha.”

The Joslyn Art Museum staged a tribute to Vince Guaraldi over the weekend in a fitting holiday season program (for those familiar with A Charlie Brown Christmas). One of Omaha’s early rock scene mainstays joined in the performance.

It was Stephen Sheehan, vocalist of 1980s ambient pop band Digital Sex, who sang Guaraldi’s “Little Birdie” accompanied by a host of jazz players. Check it out below:

Sheehan was one-third of Digital Sex with guitarist John Tingle and current Chemicals/InDreama bassist Dereck Higgins, which formed in 1982 after Higgins’ punk band Elvis and His Boss. Lazy-i blogger Tim McMahan chronicled the band’s rise and fall and rise in an article for the now-defunct The Note out of Lawrence, Kan.

The quick version: Digital Sex gained local notoriety in the first couple of years after its formation before quickly succumbing to a “drug-filled lifestyle.” The trio recorded a last-gasp nine-song LP Essence in 1984, which was picked up by French entrepreneur/label owner Jean-Pierre Turmel after a copy made it to Roune and hit number-one on a French chart. There would be two more breakups before the decade was out.

Wild, right? Read the full story here, and revisit a few tracks below.

Omaha rapper Stylo Tha Don dropped a new video over Thanksgiving weekend. The song is called “Getting Fetti,” and it comes from his latest album This Thing Of Ours. Watch the video, produced by Make Believe New Media, below:

Tonight, My Morning Jacket frontman Jim James brings his solo act to Slowdown. James’ new album Eternally Even finds the songwriter at his most psychedelic and most poignantly topical, picking up right where 2013’s Regions of Light and Sound of God left off. Lousiville, Ky., rock trio Twin Limb open the show. 8 p.m., $32, all-ages, RSVP here.