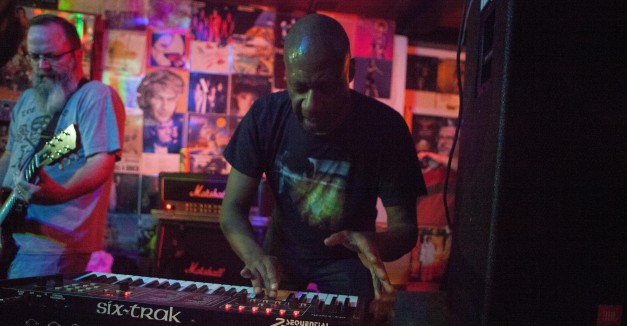 The musician’s path seemed laid before the feet of Dereck Higgins. The Omaha artist comes from a long line of musicians, artists and ministers, all of which lived and breathed music.

Higgins chatted about his music-rich upbringing in the latest Faces of Color video profile. For those who don’t know, Higgins is a Omaha music veteran of more than 30 years, having played in InDreama, RAF, Digital Sex and his own ambient experimental project.

In the video interview, which went live this past Friday, Higgins talks about the cosmic nature of music, his inspiration by life experience, and the joy of sharing self-expression, whether through his own performance or tutoring young musicians.

Omaha producer Mike Johnson and poet Jade Lacy have collaborated for the first track from Johnson’s upcoming second EP from his electronic project Ridgelines. “Who Wakes Up” begins as if emerging in a dream-like abyss of synth and pounding, clapping beat. Lacy’s voice echoes in from seemingly every direction, asking the song’s title question as if long-wearied by the search for its ever-elusive answer.

Omaha rock band Super Moon will take to the road this summer, spinning through the Midwest on a week-long stint. The doom rock foursome released a self-titled EP in February, and will play more than a handful of shows in the tour run-up, including April 30 at Barley Street Tavern with The Decaturs and The Ambulanters (RSVP here).

For a fuller listing of this week’s shows, head to our statewide calendar here. Keep those song submissions, story ideas and news tips coming via email at news@hearnebraska.org.