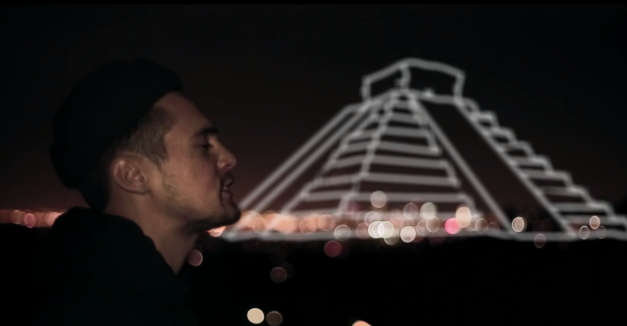 In November, Omaha rapper Conchance and a few friends struck out on a western United States tour with a capstone five-show run in Los Angeles. The group, which included producers Kethro and Dojorok, made time for some other endeavors, including the third installment of Conchance’s a cappella Beers & Bars video series.

The video premiered at Film Streams last night before Time is Illmatic, a documentary about Nas’ life leading up to and surrounding the recording of his breakout album, 1994’s Illmatic.

Conchance stands far from the downtown L.A., rapping a cappella. As always, tracing the actual thread of Conchance’s lyrics is a recursive labyrinth. But without instrumentation, the series offers an appreciation for the physicality of Conchance’s delivery and a chance to feel his words — their impact — without getting wrapped up in the literal content.

The film follows two graduate students who stop in a small farming town where they witness a brutal murder.

Mardock told us he scored student films as a student but this will be his first attempt since. The Endor crew reached out to Mardock thinking he’d be a good fit. Mardock saw it as a good opportunity to explore an interest of his.

“I really love film scores and am inspired by the scores of composers like Alberto Iglesias, Brian Eno, Vangelis, Jon Brion, and Wendy Carlos,” Mardock says. “This is something I’ve wanted to do for a long time.”

Mark Kozelek of Sun Kil Moon and Red House Painters plays Vega tonight, and according to Facebook, tickets for the intimate performance are almost gone.

Kozelek has been leading indie-folk and rock projects for nearly 30 years. Last year, he released his best-recieved album to date with Benji. Last week, we published a five-song primer on Kozelek’s long and fruitful career. Read it here.