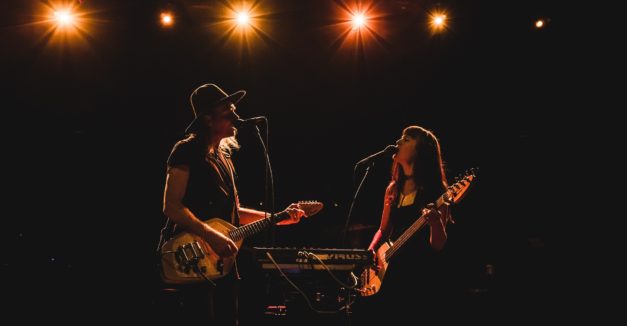 Several months after debuting their electronic duo project, Todd and Orenda Fink are gearing up for their debut release together.

As Closeness, they have shared the first single, “More Romantic,” from the forthcoming EP Personality Therapy today via Stereogum. The new album is set to drop Feb 24 on Savannah, Ga., based independent label Graveface Records.

“More Romantic” mixes Todd’s skillful production with elements of Orenda’s atmospheric inclinations. As its rhythms pulse, her voice soars ethereally, delivering with earnestness and hopefulness her romanticism in the face of mortality.

As the Stereogum write-up notes, the track (and album) are greatly influenced by Orenda’s November 2015 heart surgery and subsequent recovery. Just before unveiling the project this past April, Orenda noted that the health scare sparked their working together.

“I think for both of us, it brought to light a lot of feelings that we never had before about our mortality and how that looks,” she told HN prior to Closeness’ first show at O’Leaver’s. “In a way, recovery kind of forced us into this space where we could kind of carve everything out and just be at home together and start working.”

It’s midweek, but that doesn’t mean HN Radio can’t get a refresh. This week, we roll with new tracks from Plack Blague, Chikadibia, John Freidel, Edem Soul Music and much more.

Plack Blague announced the release of a new album Night Trax this spring with its first track, “Destroy The Identity.” The Lincoln artist filters his “lust for sin” through old-school, pulsating industrial electronica in signature fashion. Catch him at The Waiting Room this Sunday with Cold Cave and Drab Majesty (RSVP here).

And after releasing his debut solo album A Rose In Glass on Jan 3, John Freidel has released a few extra tracks, one of them, “Siren’s Wind,” featured on the playlist. Check out the theatrical sensory experience album here.

Stream the entire HN Radio playlist — which also features For Against, Linear Symmetry, All Young Girls Are Machine Guns and Lincoln rock band Seymour’s cover of Twin Peaks — at the top of the website or listen below:

Also in Lincoln, Nashville husband-wife Americana duo Fort Defiance plays at Vega in what will be the first of a two-night Nebraska run. They hit The Down Under Lounge in Omaha tomorrow night. RSVP here and here, respectively.

Plan the rest of your week in shows with our statewide calendar here. Email us with news tips and story ideas at news@hearnebraska.org