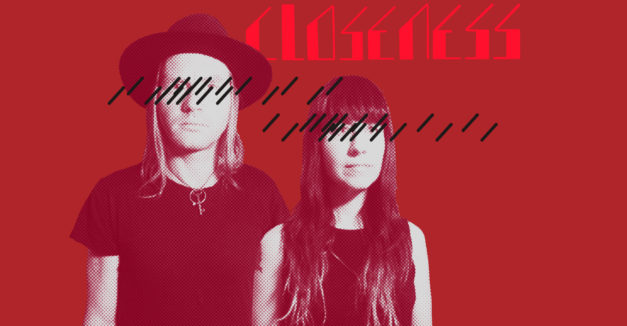 When Todd and Orenda Fink were first married a little more than a decade ago, their personal aesthetics were very different. Long before making intense electronic music together was even the faintest of realities, simple decisions on wall paint colors and furniture would often become contentious.

“We were even fighting about it because [our tastes] were so different at the time,” Orenda says over speakerphone one Wednesday afternoon. When I ask if making music would have been possible then, Todd (also on the line) pauses for a beat, then lands on it.

Insert ten years of growth — through separate, successful musical endeavors (The Faint, Digital Leather for Todd; the now-defunct Azure Ray and High Up for Orenda) and together as a unit — and not only is home decor a non-issue, but the Finks are creating together. They play their first show as loop-based electronic project Closeness Saturday, April 30 at O’Leaver’s.

When we talked, the Finks were still hammering out the last few songs (“I’m always a little better under pressure, creatively,” Todd says), but shared a sampling of what they had. Dark, dreamy and epic, it marries Orenda’s taste for ethereal soundscape and Todd’s longstanding electronic interests.

Thought the pair had always pondered the idea of starting a band together, the present idea only came together roughly six to eight months ago. The darkness in their work was born in the wake of Orenda’s November heart surgery and recovery thereafter.

“I think for both of us, it brought to light a lot of feelings that we never had before about our mortality and how that looks,” Orenda says. “In a way, recovery kind of forced us into this space where we could kind of carve everything out and just be at home together and start working.”

The pair have tediously co-written everything, in order to distinguish the project from their numerous others and keep the creative process fresh. Orenda says though she’s dabbled in the electronic world, building songs brick by brick conceptually in this way has presented a different challenge than, say, bringing a song to her bandmates in High Up.

“It takes a totally different area of your brain,” Orenda says. “You’re performing but you’re also remembering all these little buttons. It’s not something that I’m usually thinking about.”

Near the end of our chat, Todd entertains the idea of touring together. They’ve pumped so much energy into this once side-project that it’s beginning to walk on its own. Such is the byproduct of closeness.

“We’re so connected on so many levels at this point that we’re really expressing our being a little bit easier,” Orenda says. “We’re able to create these sounds and search for some ways of feeling and ways of being that we have learned from each other.”

In its third year of series ownership, KZUM has expanded the Thursday night series to 13 concerts, up from 10 when Irvingdale Neighborhood Association handed over duties in 2014. Program Director Ryan Evans says the station was eager to make more room for the city’s increasingly fertile music community.

“The creative energy of Lincoln and the surrounding area is so strong right now that it’s important that we to continue getting better about exposing it to people,” Evans said. “This concert series is a great way to work toward fulfilling that goal, in that we can provide access to some of that creative energy for free, in a safe, accessible and family friendly environment.”

Evans also noted the community effort behind hosting the Stransky Park series. A volunteer committee assists with booking, attracting sponsorship, promotion and day-of logistics. Without their hustle, combined with local business support and

“This series is a community effort in the truest sense,” Evans said.

See the full performance lineup below. KZUM’s Stransky Park series runs every Thursday this summer (weather permitting) from May 26 to Aug. 18. Concerts start at 7 p.m. Follow along here.

Mesonjixx is taking their music to school, playing Lincoln High this afternoon and sitting for a questions and answer session with students post-set. The Lincoln soul/R&B four-piece played Lincoln North Star last week. Below, vocalist Mary Lawson gives us the scoop on how the opportunity came about and why they pursued it.

HN: How did this opportunity come about?

Mary Lawson: I reached out to Choir Director, Joni Osbourn at Lincoln North Star HS (I graduated from LNS and loved my music experience while attending).
I reached out to 2D Art Teacher Jen Deets at Lincoln HS. Both Deets and Osborn we’re down, and equally excited as I was for the opportunity!

HN: What specifically do you hope to accomplish by playing these concerts/doing a Q&A? Why is this important?

ML: I hope to accomplish intergenerational visibility in the art and music community. It’s important that HS students have access to local music and art, because in many instances it’s them who will “carry the torch” so to speak or at least have had an experience to remember – maybe one that inspired them to continue being creative after HS. It’s important to ask questions, period. Experiences with any and all types of creative expression can lead one to asking questions about their own work, or provoke or inspire courage to share their story. I love the Q&A portion of events!

HN: What expectations do you have?

ML: Art and music scenes are strongest when inclusivity in these spaces – of music and art – are encouraged and made a priority. Art and music shared and told by all is vital for any enlightened community to move forward. Stories that are less heard, are the ones that should be heard more and made visible.

For a listing of tonight’s shows, head to our statewide calendar here. If you’ve got something going on, we want to know about it. Send all news tips and story ideas to news@hearnebraska.org