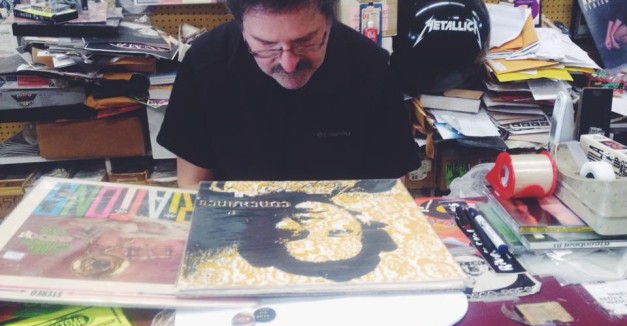 Don’t mourn the death of blues just yet.

Last month, Blues Society of Omaha reached its 15th year of supporting blues in and around its city. To celebrate, the organization released a double CD compilation at Davina and the Vagabonds’ shows at Zoo Bar in Lincoln and 21st Saloon in Omaha.

Blues Society of Omaha organizer Jeff Malloy says that they first released a compilation CD for the fifth year anniversary. He says BSO was interested in showing the change and growth in local and regional blues in those ten years.

“We wanted this new CD to represent as many of the talented blues artists we have in our area or who come through here from the surrounding states as we could get to participate,” Malloy says. “Since both our fifth and 15th anniversary CDs were compilations, we felt there was some historical continuity represented.”

“BBQ Shoes” by Blue House & The Rent To Own Horns, Omaha
“Wrong Side Of The Blues” by Trampled Under Foot, Kansas City
“Blues For Omaha” by Honeyboy Turner Band, Lincoln
“Cold & Lonesome” by Sean Benjamin, Lincoln
“Move Along” by The Rex Granite Band, Featuring Sarah Benck by Omaha
“Sure Use A Ride” by Dave Steen & Jailhouse Tattoo, Lincoln
“Those Lovin’ Arms” by Kris Lager Band, Omaha
“Is This the Hill?” by Paul Scott Hoagbin, Omaha
“Voodoo Queen” by Life of Riley, Omaha
“Get On Home” by Scott Keeton Band, Oklahoma City
“Swampboy Boogie” by Swampboy Blues Band, Omaha
“Blues Wah” by George Walker, Omaha
“Can’t Be My Woman” by Steve Lovett Blues Band, Omaha
“Baby I’m Gone” by Christy Rossiter & 112 North Duck, Omaha

Malloy also included comments on the significance of the release from members of the Blues Society. Names have been omitted at Malloy’s request.

“I believe that Nebraska has some of the greatest talent and should be supported and celebrated. What better way than to put all of us together in a recording for everyone to enjoy with the hopes that the new CD will reach many others outside of the Nebraska area. The Blues Society has kept the blues alive in the Omaha area for such a long, wonderful time and honestly if it wasn’t for them I’m not sure that the band would have had the support and chances to perform that we have enjoyed in the past.”

“When I listened to the CD I was amazed at all the great talent. The blues is definitely alive and well in Nebraska. Thanks to the efforts of the volunteers of BSO, the blues has a bright future in Nebraska and beyond.”

“How many locally focused music organizations make it past two or three years, much less 15?  The staying power of BSO is phenomenal.”

The CD can be purchased directly at the 21st Saloon or ordered through the mail by contacting Jeff Malloy at ooobaby44@yahoo.com. It’s also for sale at Homer’s in Omaha and it will also be available at all three Playing With Fire shows at Turner Park at Midtown Crossing, Zoo Fest in Lincoln and at the Soaring Wings Wine and Blues Fest in Springfield.

The Grassroots Music Festival lineup is here with a few impressive, and varied, national headliners including Kid Cudi, Lynyrd Skynyrd and Schoolboy Q.

With plenty of local record stores participating in Saturday’s Record Store Day, we saw lots of people getting out over the weekend.

We’ve got some photos from contributor and host of KZUM’s X-Rated: Women in Music Shannon Claire from her outing on Saturday with Every Kind of Blue host Laura Fortnay, Universe Contest violinist Jordan Ellis and The Bottle Tops vocalist Kerry Semrad.

Let us know what you picked up this weekend.

Tonight, Griz returns to The Bourbon with Exmag and Muzzy Bearr. The Boulder-based DJ and electronic producer has made his name with live saxophone performances. He’s played The Bourbon at least two other times in the last few years. On March 31, Griz released his fourth studio album, Say It Loud, at the end of March. Tickets for the show are $25. RSVP here.