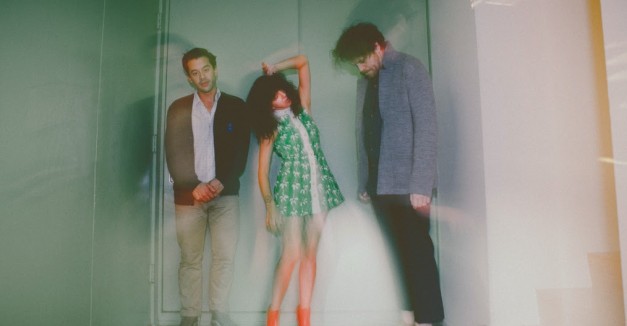 Big Harp has never really been about repetition, so though its new album announcement on extremely short notice may come as a shock, but definitely not a surprise.

Waveless, the Los Angeles-based indie band’s third full-length album, will release this Friday, Aug. 14, on Portland-based tape label Majestic Litter. According to guitarist/vocalist Chris Senseney, most of the songs were self-produced over the last two months with engineer and former Rilo Kiley bassist Pierre de Reeder.

Big Harp also released a new track, “Golden Age,” premiered on Pure Volume. The bouncy upbeat track is fuzz galore, bassist Stefanie Drootin-Senseney’s riffs climbing around a sunny pop beat. If it’s any indication of how the rest of Waveless goes, Senseney isn’t kidding when he says “None of our albums are really related to each other.”

Hear “Golden Age” below, and check out the Waveless track list along with upcoming Big Harp tour dates.

Big Harp Tour Dates (all dates with The Good Life)

In a small, second story living room, in the glow of white Christmas lights, Orenda Fink’s voice lilts gently. A loop pedal sends a gentle wash over a modest crowd. This, after what sounds like a ceramic cup breaking on the wooden floorboards. She smiles and presses on.

View the intimate performance below:

Tomorrow, Omaha singer/songwriter Orenda Fink will take the Hear Omaha stage at 13th and Howard, in a performance rescheduled from its original June 11 date. Read our Q&A with Fink from June 9 here, in which she details work on a new collection of cover songs, an electronic project with spouse and The Faint frontman Todd Fink, and that she’s a part of the brand new band High Up.

A new Omaha children’s vocal music group is aiming to make choral music education accessible to children from all cultural and economic backgrounds.

This Saturday, ahead of its inaugural season, the Omaha Children’s Choir will host an open house at Benson Park. It will serve as a chance for parents, youth and community members to learn more about the choir, as well as an opportunity for interested children to register and audition.

Founder and artistic director Amanda Stevenson explains that the Omaha Children’s Choir will provide a wide variety of programming, including everything from renaissance and classical traditions to gospel, folk, pop, contemporary and world music. She hopes to have the group perform free concerts and community events, and that through the all-inclusive nature of the choir, inspire social change.

“We are not just about music education; rather, we are about developing young people into leaders,” Stevenson says.

In advance of its Friday release, the entirety of The Good Life’s Everybody’s Coming Down is now streaming via Stereogum.

A brief review of the album is featured alongside the stream, comparing The Good Life to Superchunk and Weezer. While we’re not sure those are apt, we do agree that there are sounds on the record coming from all over the place. Stay tuned for more thoughts, as tomorrow we publish our “On The Record” podcast review of Everybody’s Coming Down.

In the meantime, listen to the album here.

Tonight, Simon Joyner & the Ghosts will play a free concert at Pageturners with Danny Pound as part of the Omaha lounge’s summer concert series. Joyner posted via Facebook that the set will look similar to ones the Ghosts have played recently, though in such an intimate space, we’re willing to bet he’ll match the mood. RSVP to the 9 p.m. show here.

At Duffy’s Tavern, Denver garage rock band The Trip will play on a billing with Lincoln’s Powers, The Dancing Dead and Magnetic Souls. Entry is $5 at the door. RSVP here.