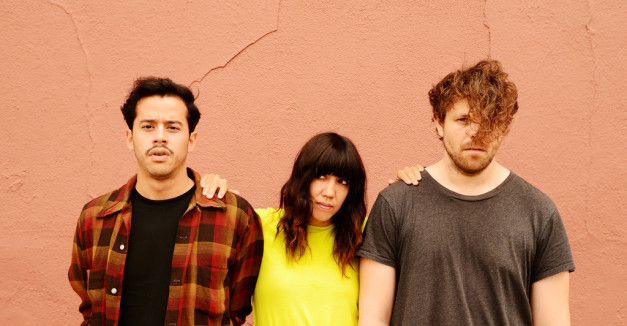 As the guitar drops in like Charlie Brown’s principal at the outset Big Harp’s “Diev,” so too does a rocket blast off at the beginning of the band’s new video. Throughout, Chris Senseney, Stefanie Drootin-Senseney and Daniel Ocanto float through space, and by the time the ultra-catchy chorus pops in, the viewer might have forgotten whether the sea she was diving into was ocean blue or deep-space black.

Big Harp is out on tour now with The Good Life, which culminates in a November 28 show at Slowdown. Omaha’s High Up will also play (RSVP here). See the video for “Diev” below:

The eventual two-year recording process was abruptly put on hold when all tracks at their home studio were lost. The band had a decision to make.

“We decided that if we we’re going to finish we might as well go all out and do it right,” says Naked Sunday frontman Jason Mayer.”

That meant heading to Lincoln to work with Tim Kechly at Fuse Studios. Drummer Ian Wenzel had a family connection with Kechly, and what started as a recommendation quickly became a positive, collaborative effort. They brought in John “Honeyboy” Turner to play harp, Julia Cortinas on accordion and backup vocalists Kris Mayer and Deepa Roa Buss.

Mayer says that the delayed recording sessions actually benefitted Naked Sunday, allowing the band to put more energy into molding the album. The constant honing and revision shows through 10 songs of bluesy rock.

Tonight, Naked Sunday releases its self-titled album in the Slowdown front room with Luke Johnson and Virgin Mary Pistol Grip. Johnson, an Omaha-based singer songwriter, is releasing an album of his own, a three-song EP. RSVP to the 9 p.m. show here.

We aren’t often overly sentimental in this space, but as the winds of winter approach and the year winds down, it’s hard not to take stock of our lives and loved ones.

Omaha R&B artist Dominique Morgan addresses the latter in his new single, “Miss You Most At Christmas Time.” The track, from his forthcoming holiday album Dom’s Favorite Things, reaches out to a lost loved one at a time when the yearning pulls the hardest and the heart is at its heaviest. Whether distance or a lifetime is the barrier, Morgan bears the weight of longing through passionate vocal delivery and heartfelt lyrics.

Hear the debut of “Miss You Most At Christmas Time.” Dom’s Favorite Things drops Friday, Nov 27 online and one week later at The Down Under (RSVP here).

New Omaha venue Milk Run throws its grand opening Saturday. The small venue space will host American Cream, David Nance, Robust Worlds and Church of Gravitron. Milk Run is operated by Perpetual Nerve’s Chris Aponick and Sam Parker, with sound by See Through Dresses’ Sara Bertuldo and Matthew Carroll. Earlier in the week, Lazy-i blogger and HN board member Tim McMahan spoke with Aponick about their goals for the space, its culturally meaningful name and its place in the Omaha scene. Read the interview here. RSVP to the 9 p.m. show here.

Tomorrow night, Holly Golightly and the Brokeoffs plays O’Leaver’s with Simon Joyner & the Ghosts and Those Far Out Arrows. The British-born singer’s career has morphed over its 25-plus years, spanning from garage rock in its early years to the Americana-inspired records of late. Most recently, the duo of Golightly and Lawyer Dave released Slowtown Now this year on Damaged Goods records. RSVP to the show here.

Also tomorrow, Lincoln’s Walk By Sea plays its EP release show at The Bourbon with Evan Bartels, Powerful Science and Betafauna. We briefly reviewed the As The Night — the band’s second EP — yesterday in our news column. Entry to the 7 p.m. show is $5, RSVP here.

At Reverb Lounge, Dilly Dally plays a show with Omaha punks No Thanks. The Toronto punk band released its debut album Sore in October and have been riding the buzz train ever since. Stereogum and NME named Dilly Dally of the “Best New Bands of 2015.” Its cover of Drake’s “Know Yourself” was one of Fader’s 24 most important things to happen at CMJ. Entry to the show is $10, RSVP here.

And Sunday, New Jersey’s Overlake plays Duffy’s Tavern with Lincoln’s Powers and Omaha’s Gordon. Overlake is on tour in support of April 2014 album Sighs and October 2015 seven-inch Travelogue/Winter Is Why. RSVP to the 9 p.m. show here.