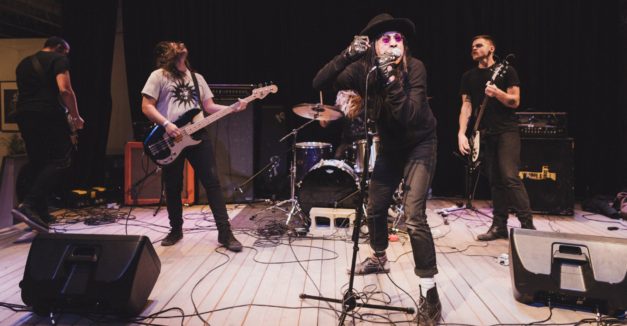 Another Nebraska band has found its way onto a national music publication’s year-end list.

“The bark and the howl draws you into POP, but it’s the Omaha hardcore band’s relentless pummel that keeps you along for the ride. Feedback bleeds from one vicious track to the next, where organ melodies shriek and guitars blare. One song is called ‘Anxiety’—an overwhelming feeling that stays in the body when you hear to this thing.”

The Pitchfork feature isn’t the first time Bib has found national press since its fast arrival in local hardcore and punk circles. National blog No Echo tabbed the band as one of 12 to watch in 2016. It didn’t disappoint, enjoying a busy year of out-of-state touring and their debut album’s release on Canadian punk label Deranged Records.

The inaugural Omaha Zine Fest, held in March last year, was a haven of diversity, inclusivity and activism. Zines of all kinds — from handmade pamphlets to bound books, on topics ranging from cats to consent to crumbling the patriarchy — lined the aisles inside 1316 Jones St.

According to co-organizer Andrea Kszystyniak, some referred to it as “punk prom,” which she found to be an apt characterization. Such a setting can make for an open, unifying exchange.

“I thought it was a good way to describe it,” Kszystyniak says. “It’s a good way to meet people, especially if, like me, you are self-conscious and awkward and don’t know how to approach people in an environment that isn’t already structured.”

This year’s Omaha Zine Fest will take place in its new home at the Union for Contemporary Art, 24th and Lake, on Saturday, March 11. Organizers are accepting applications now through January 15, welcoming zines and zine makers from across the nation.

“We’re already seeing lots of applications from California, Minnesota and Missouri,” Kszystyniak says. “We’re hoping to get a really diverse representation of states out here and have the opportunity to show off Nebraska.”

In addition to its new location, the OZF trio plans a few additional updates in year two. The venue will allow complete integration of the festival into its space, which will feature an art gallery space and workshops hosted by community partners.

OZF also looks to build on its workshop sessions, molding them to reflect the activist and DIY content of zines themselves. Kszystyniak says that instead of teaching people how to make a zine, they are working on featuring speakers on the importance of topics like the Black Lives Matter movement and sexual consent and how to get involved with social movements.

“We want the content of our workshops to represent the soul of our fest, which has always been activism,” Kszystyniak says.

Ultimately, Omaha Zine Fest’s goal is to create a safe and welcoming space for people to share their ideas and their work. Kszystyniak considers that attitude to be the backbone of the festival, allowing its participants to feel celebrated and respected.

It’s also what has her so excited for another run.

“OZF is the highlight of my whole fucking life and I’m not ashamed, to be honest,” Kszystyniak says. “I’m excited to meet all the cool out-of-towners who will be visiting Nebraska for the first time. I’m excited to watch people learn new things and discover zines for the first time and maybe make zines of their own. I’m excited for old zinesters to come and share the decades and decades of zines they have. I’m excited to cry my eyes out at some point because I am so proud of the people in this community and all of the amazing work they do.”

Last December, we introduced our audience to Jack McLaughlin, then a 15-year-old prolific songwriter emerging in the Omaha folk scene. Jack mentioned his brother Ben in that interview as his biggest influence, and now the two are in it together.

Their band, Middle Folk, released its debut self-titled album today, and premiere’s its second single “What A Good Man Should Be” via HN. Produced by Omaha’s Adam Roberts, the album features smart, crisp songwriting and an mix of classic and contemporary folk, bolstered by bassist Lukas Olson and drummer Erik Shouse.

While none of its members are more than 19-years-old, Middle Folk isn’t without its share of experience. The McLaughlin brothers have played together for more than five years, three of them in the Omaha BluesEd program with Shouse. Olson is also a founding member of Omaha rock band The Chicago Street Experiment

In celebration of the new record, Middle Folk will perform one week from today, Wednesday, Dec 21, at Reverb Lounge with Eric In Outerspace frontman Sean Paul. The all-ages show starts at 8 p.m; RSVP here.

Listen to “What A Good Man Should Be” below:

Check out the rest at our statewide calendar here. Email us at news@hearnebraska.org with news tips, story ideas, upcoming shows or other details we missed.