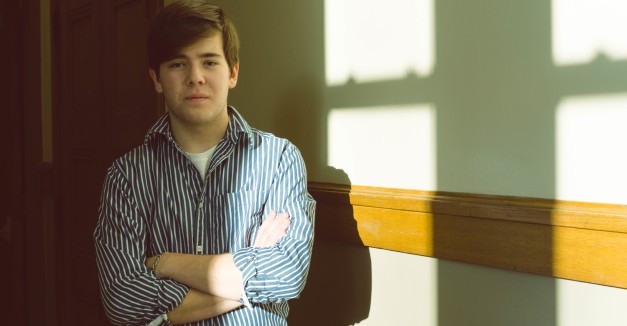 At 15, Jack McLaughlin still enjoys playing in bands, but might be among the Nebraska’s best yet-unknown singer/songwriter. A former baseball player, McLaughlin turned to music after breaking his jaw fielding would-be long-balls at TD Ameritrade’s first home run derby. Since then, the self-taught guitarist has released two albums, written more than 100 additional songs and made appearances on local daytime television.

In October, McLaughlin released Lost In The City, an amalgam of folk, indie and acoustic pop influences. We caught up with the aspiring songwriter to chat about his early Elvis fandom, looking up to The Smiths and Omaha’s Con Dios and how making music with his brother has broadened his horizons.

Hear Nebraska: When did you start playing guitar? What is your earliest musical memory?

Jack McLaughlin: I started playing when I was nine but quit. I picked it up again when I was 12 and taught myself. My earliest memory was being obsessed with Elvis’s music. I used to have a pair of blue suede shoes when I was about five that I’d wear all the time. He was my idol until I was about seven or eight when I learned about Bob Dylan. Bob Dylan was the first CD I bought.

HN: What is one local band/musician you look up to or take influence from and why? How about a national one?

JM: One local band I really look up to among many is Con Dios. I like them because I feel their music is very down to Earth just like the members of the band are. There are beautiful melodies along with piano from Dan McCarthy sprinkled in. As far as a national one, The Smiths. Morrissey’s anger filled lyrics with Marr’s ambient guitar tone mix together to make a perfect combination.

HN: You recently played on KMTV’s Morning Blend, and talked about growing up playing Guitar Hero with your brother. How influential has he been to your musical endeavors? What was it like to play in a band with him?

JM: He has been the biggest musical influence on me more than anyone else has. Playing in a band with him was just as much fun as it was a learning experience. It is still very fun whenever we play shows and I learn more every time we play. His musical interests inspire me to broaden my musical horizon.

HN: You quit that band to start writing songs on your own. What about solo work appeals to you more than playing in a band?

JM: For me it wasn’t a matter of appeal to go solo. The band was slowing up and I got bored and had to do something. So I home-recorded From The Attic. We got back together but I still liked to do the solo stuff. So it was actually the exact opposite. For example, the day of the school talent show I had a different band set to back me up and play “When You Come Through” (on Lost in the City). They backed out a couple hours early, so I decided to just do it myself because I had already turned in the paperwork. I enjoy playing solo because there’s no one to rely on in practice. But, it isn’t very fun because you’re the only one on stage. It can be intimidating at some points.

HN: You told me in a previous conversation that you have written close to 100 songs. Where do you draw inspiration for such a wealth of material?

JM: I try to pull my songs from my life experiences. I don’t like writing about anything that hasn’t really affected me personally because it would be useless if I did. There would be a hole where the heart or emotion of the song should be. I write about three main things: memories, issues, and hope.

HN: Where do you see yourself musically in five years? What are you shooting for?

JM: I really don’t know where I’ll be in 5 years. I’m going wherever music takes me and so far it’s been a very good run playing shows and meeting great people. My main goal is to keep putting music out there for anyone that will listen. Whether that is two people or two thousand people, my goal will stay the same.