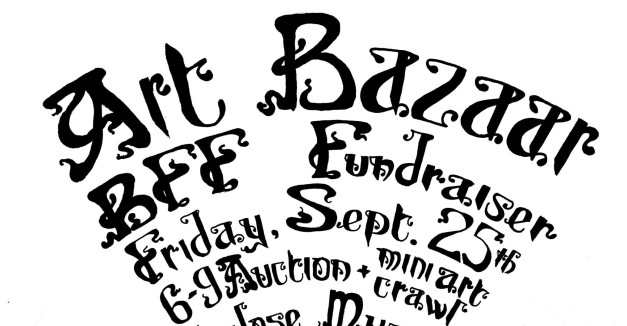 Benson First Friday has always been an event-oriented organization, staffed by volunteers with a passion for arts. But after more than three years and 40 first friday events, its organizational heads were looking to expand its programming mission.

“We want to be an umbrella for any local artist that wants to do a project but doesn’t have the funding necessary,” says longtime volunteer and organizer Alex Jochim.

To aid its expansion efforts, Benson First Friday has announced its status as a newly-minted neighborhood arts non-profit organization. To celebrate, it will host an Art Bazaar this Friday in and around Benson’s The Sydney, featuring live performances by A Ferocious Jungle Cat, Gordon and DJ Joe Benson (RSVP here).

Jochim says that the decision to incorporate as a non-profit came about organically in October 2014, as he and fellow volunteer organizer Jamie Hardy weighed the pros and cons. After more than three years and countless hours programming as volunteers, it became taxing on staff and monetary resources.

“Benson First Friday was at the point where we were doing great things, but we were becoming burnt out,” Jochim says.

Jochim says that non-profit incorporation will open many doors for Benson First Friday, chief among them being funding. Increased monetary resources will allow BFF to aid local artists and pursue projects like daily workshops and a clothing line partnership with Paper Doll.

The fundraising efforts begin Friday at its Art Bazaar, which will feature a full evening of arts and entertainment. It hosts a mini art-crawl from 6-9 p.m., including an art auction, artist Sidney Buchanan’s opening reception at The Little Gallery, Ramanda Fuelberth’s After Dark Street Project and an informational session on BFF’s Tiny Mural Project, led by artist Maggie Weber.

Then the festivities move to the Sydney, where BFF will host an arm wrestling tournament, comedy sets by Audrey Farnham, Drew Bohlke and Jordan Kleine at 8:30 p.m., a live mural painting by Reggie LeFlore, drag show at 10 p.m. followed by live music at 11 p.m.

“We wanted to have an eclectic event … with a mix of everything we stand for [in] multi-disciplinary arts,” Jochim says.

See the event flier below for more details. Food and drink will be provided by Maria Bonita food truck and Upstream Brewing, respectively. Check out Benson First Friday’s website for more information.

After testing the waters with a few recent Omaha shows, new band High Up has released its grooving first single along with a string of upcoming tour dates

High Up also announced a handful of upcoming performances that include a three-day jaunt with Conor Oberst in mid-October, sandwiched by three dates in Omaha. It plays Slowdown Nov. 28 with fellow Omaha band The Good Life.

Hear “Two Weeks” below, and check out the complete mini-tour listing:

* with Conor Oberst
# with The Good Life

Tonight, Detroit hip-hop group Slum Village performs at Vega with Cool Nutz, Lincoln’s Sleep Sinatra, Hakim and Young Steez. Slum Village was founded in the early 1990’s by Baatin, T3, rapper and producer J Dilla. The group climbed to success throughout that decade, playing A Tribe Called Quest’s farewell tour in 1998. Hip-hop connoisseurs — and production nuts especially — will recognize J Dilla (James Dewitt Yacey) as one of the most influential hip-hop producers of all time. Though he left Slum Village in 2001 to pursue his fruitful solo career, he assisted in production until his death from Lupus in 2006. After taking a four year hiatus in tragedy’s wake, Slum Village bounced back in 2010 with Villa Manifesto and has continued touring ever since. RSVP to the 8:30 show here.