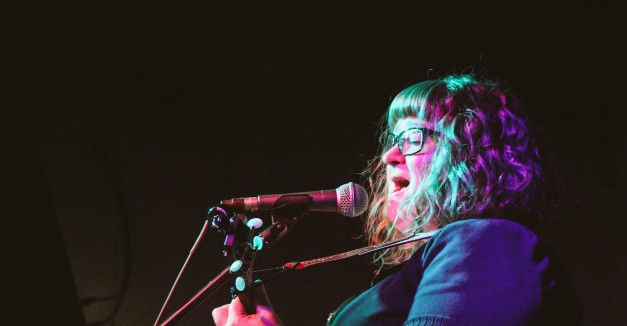 As any diehard Nebraska music fan knows, you don’t have to look far to find talented women musicians performing during any given week of shows. A festival to highlight that fact, six years in the making, is finally coming to fruition.

The DIY festival will showcase talented women artists and musicians in the Omaha and Lincoln community. Lowry, who also fronts All Young Girls Are Machine Guns, originally conceived of a women-centric arts and music festival when she began playing shows around town in 2009.

“I just met so many awesome women right away, and even more once Hilary Stohs-Krause started writing the X-Rated column for Hear Nebraska and doing the radio show for KZUM in Lincoln, and I wondered what it would be like if we all sort of combined our musical power like a Musical Megazord,” Lowry says.

This Friday, Lowry will begin taking submissions for the Benson First Friday Femme Fest via email at bfffemmefest@gmail.com. Entrants simply need to include their request to participate in the event, as well as the name of the woman/women in their project. All ages and genres are welcome, and bands with a female musician in any position are welcome to toss their hat into the ring. Women interested in showing art during the festival should contact Jamie Hardy with Benson First Friday at bensonfirstfriday@gmail.com, putting “Femme Fest” in the subject line. The festival committee is accepting entries through June 15.

As the idea for Benson First Friday Femme Fest began to take shape, Lowry reached out to possible venues to host it. While it took some time — roughly three years, in fact, since she first tried to book it — she finally went all in.

“I finally took some advice I’d given to a musician friend about booking the show first in order to motivate you to do the thing,” Lowry says.

To that end, she reached out to Jim Johnson at 1% Productions in April and booked the Waiting Room and Reverb Lounge for the same night. Utilizing all of her resources — including Emily Engles from E3 Music Management, Jamie Hardy from Benson First Friday, Shannon Claire of X-Rated Women in Music radio show — she had nearly the entire strip booked within a day.

Lowry aims to prove what many already know: that there are enough women in the music community to fill a festival bill. That community, she says, is strengthened when its members realize their common bonds and establish connections.

“The visibility of women in music empower other women to continue to make music,” Lowry says. “There are a ton of us out slaving away for the thing we love most, and sometimes it’s nice to discover that we have resources in one another.”

We’ve known the title and label for The Mynabirds’ new LP, Lovers Know, since the spring. As of today, we get our first taste of the recorded album and a release date: Aug. 7 on Saddle Creek Records. It is the Laura Burhenn-fronted band’s third release with the Omaha indie record label.

The album’s first single, “Semantics,” premiered on NPR’s All Songs Considered, and can be heard here.

The world got its first taste of Burhenn’s new work with this late-night NPR video from SXSW 2015. “Semantics” sees Burhenn fleshed out, favoring driving and shiny pop to the shadowy and soulful balladeering that defined 2012’s Generals.

NPR Music Director Bob Boilen has been a fan and advocate for Burhenn’s work in recent years.

In the premiere today, Boilen had this to say:

“I’ve been a fan of Laura Burhenn since we met at NPR’s studios with her band Georgie James eight years ago. Her pop wisdom and desire to push her limits have produced some great music, especially the past two Mynabirds records.

Her new record comes out the first week of August. It’s called Lovers Know — and if this single is any indication, it’s a shimmering set of smart pop. This song, “Semantics,” about a “half-empty” lover and her leanings toward leaving is filled with unfolding musical surprises. The record was produced in multiple locations, including Los Angeles, Joshua Tree, Nashville and Auckland, New Zealand. And there’s a new person to the Mynabirds family: producer Bradley Hanan Carter, who you may know as the lead singer of Black English (a band formerly known as NO). His work here glistens and Burhenn’s voice is beautifully captured. A true joy.”

The Hideout, a mainstay venue for Omaha’s punk and hardcore scene, is undergoing a sudden rebranding amidst changing ownership.

The venue issued a statement via Facebook yesterday that it would continue operations as The Lookout Lounge. The statement also profusely thanked Dave Blackman, original founder and owner of The Hideout, saying that Blackman, “built more than just a great venue, he built a community of people … Dave is an amazing human being, that has done so much for the local music scene and we feel honored to follow in his footsteps.”

The venue went on to explain that it would “ … build on [Blackman]’s relentless support of local music, his commitment to bringing in quality national and regional acts, and provide a positive place for friends that feel like family to meet up and have a good time.”

New owners Kyle and Keith Fertwagner and Ryan de la Garza took the reins officially on March 1, fueled by the idea of bygone venues like The Cog Factory and Ranch Bowl (read our feature on their takeover here). Lucas Wright, long-time show promoter and the venue’s official booking agent, says that a new mixed drink menu is in the works as well.

On the same page, we have a follow-up to yesterday’s coverage of the Terror/Bent Life/Purgatory/Live & Obey show that marked The Hideout’s last billing as The Hideout. Firsttime HN contributor Eric Velander had this to say about the night:

“I left halfway through Terror’s May 11 set with a chipped canine and what I’m hoping wasn’t a mild concussion, seeing as I slept off the headache.

Hours before, there is a rumbling in my core. The anticipation of hearing Los Angeles legends is almost unnerving. In the spirit of keeping hardcore fun and pure at the urging of Terror frontman Scott Vogel, I leave the glasses in the car, stretch my calves and prepare for a sweaty night full of ringing ears and mandatory stage dives. My knees ache from a solid decade of these shenanigans. I am soon drawn into a familiar, unabashed place with the playing of a low, open chord.

In keeping with tradition, the least-known band plays first. I got the chance to chat with Live & Obey (Omaha) after their blistering, technically tight opening set of metalcore tunes. Wrought with emotion, the band displayed their dissatisfaction with the fractured, fashion-show atmosphere that has become many metal and hardcore shows in the metro area. While they have only a handful of outings under their belts in the current lineup, you can check out their DIY EP Backbone and the upcoming LP Midwest. Take a listen if you like Converge or Meshuggah. 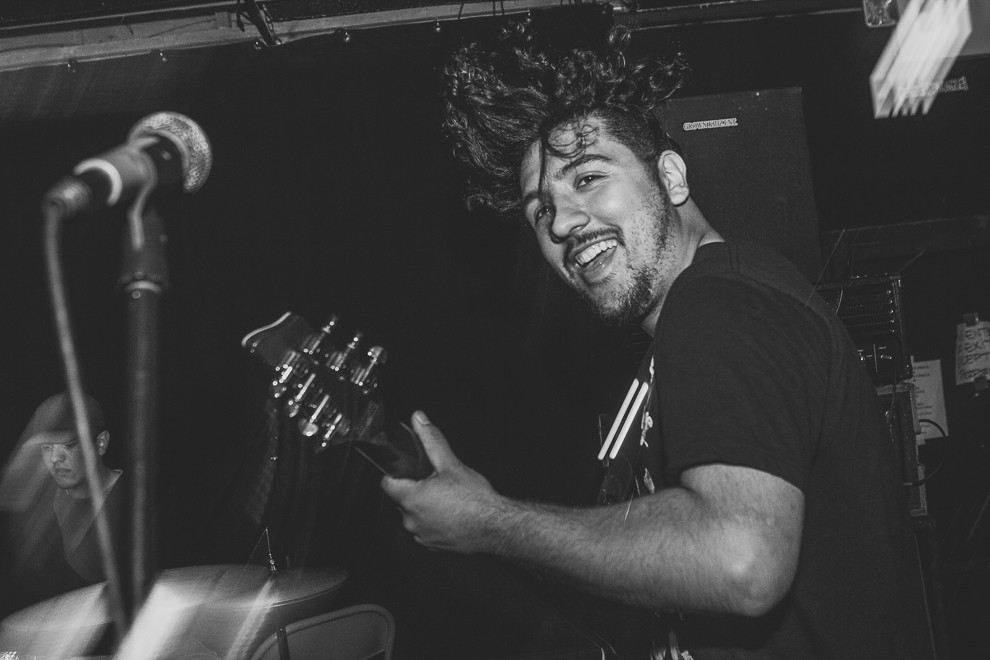 Next up was Purgatory, a hardcore outfit from Omaha featuring none other than the ex vocalist from Live & Obey. Their straight up, ‘break something’ jams started the crowd in on the shout-alongs and brotherly ribbing of friends that exemplifies Nebraska hardcore. In a showing of their true inclusive ethos, halfway through the set frontman Matt Anderson not-so-kindly asked racists, misogynists and homophobes to presently leave the venue. It’s plain to see, with the energy put out onstage by the quintet, they deeply care about their homegrown community and the feeling of inclusion it gives them. Musically tight and brutal, Purgatory will be getting plenty more of my admission money in the future. 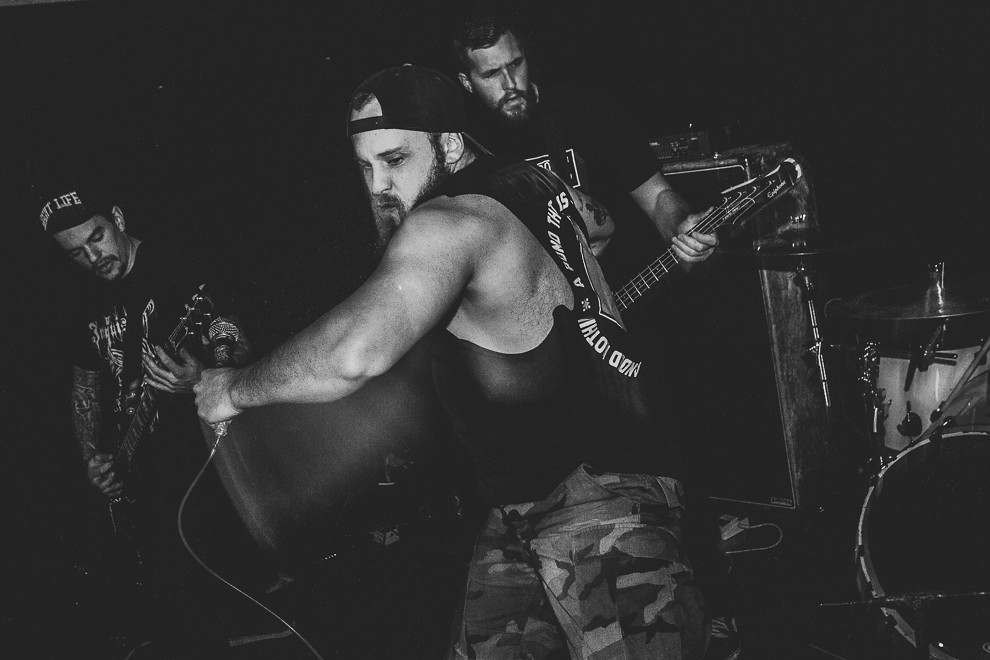 Third up was Nebraska’s own Bent Life. These Lincoln boys gifted The Hideout with a demandingly furious, professional set, leaving the dozens of shouting diehards needing more. With guest vocalists, a Pantera cover and energetic stage presence unmatched throughout the evening — even by the headliner — the collection of old and new songs from Bent Life left me craving their brand new album, Cheat Death. Look for Bent Life on tour this summer and check out Cheat Death available starting today on Bridge 9 Records. 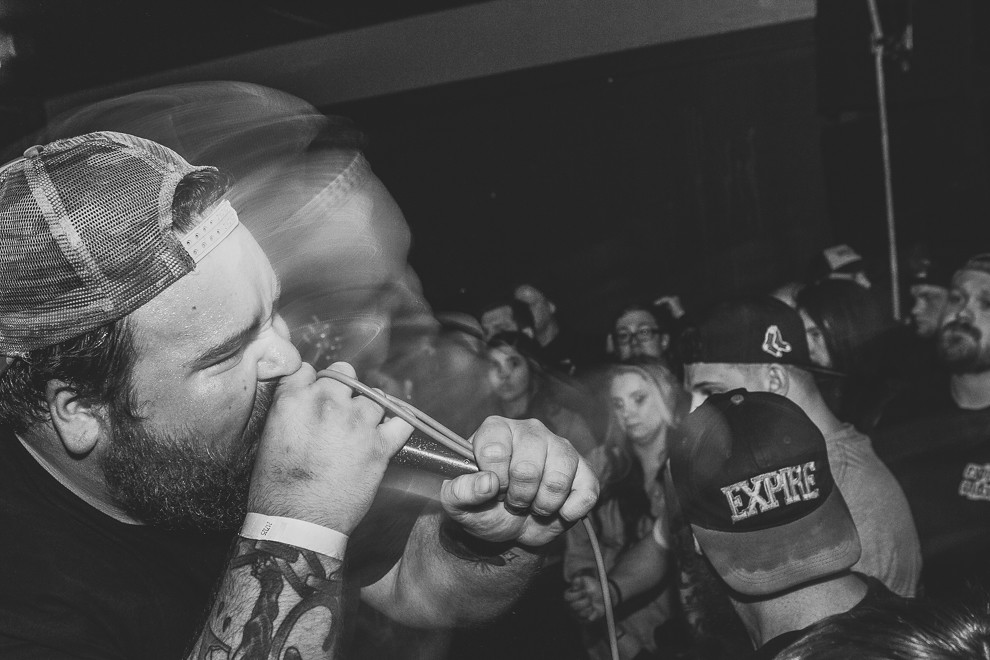 Los Angeles-based Terror’s legacy needs no description. Words on paper cannot describe the sound of 150 fans shouting messages of inclusion and freedom of expression, sometimes from the freely-given microphone. Ink does not run like sweat to the floor of the pit or the beaten, bloodied eyebrow. The motion of the pen cannot not begin to imitate the dances and the dives and the slams and the brotherly slaps on the back that embody hardcore. The only thing that can describe hardcore is a chipped canine, a ringing in the ears and an empowered smile upon exit despite everything, external and otherwise.”

Adding to a few months of substantial national press, Icky Blossoms nabbed a 6.8 from Pitchfork for its new album, Mask. Read the review here. Here’s a choice quote:

“On Icky Blossoms’ sophomore album Mask, Bohling recasts herself as a real, vulnerable human being. Though the band still draws from the same pool of ’80s synth-pop, dance, and electro-rock, they’ve replaced the aura of debauched sex that hung over their first album with a sweeter, more romantic focus.”

Having just reviewed the record ourselves, I don’t buy the reviewer’s conceit about the album showcasing a more vulnerable and humanistic Icky Blossoms. I wouldn’t quite venture it’s the opposite. Certainly, the largest thrust of the album — sonic experimentation around electronic clangs, drums and challenging dance sounds — is intriguing. But “human” isn’t the most ready takeaway.

Moreover, the review falls prey to some unfortunately obligatory Oberst/Lewis vocal comparisons for Sarah Bohling. As in, “Icky Blossoms is from Omaha, so … Omaha.”

Our staff writer’s vocal comp to Garbage’s Shirley Manson is far closer to the nail’s head.

Anyhow, a 6.8 from Pitchfork is something any act can hang its hat on.

Twenty-five years ago to the day, pre-mind-blowing-fame Nirvana made a stop at Duffy’s Tavern while on tour in support of Sub Pop debut Bleach. Tonight, the Lincoln venue hosts a celebration of that night with eight local acts performing three-to-four covers apiece. The genre-diverse billing should mean a few interesting takes on the grunge giant’s catalogue. Performers include: Bogusman, Thirst Things First, The Renfields, Domestica, Gerardo Meza, Emily Bass, Miniature Horse, and Evan Bartles. Tickets for the 9 p.m. show are $5. RSVP here.

Elsewhere, Omaha rapper Adam Mavis releases a set of recordings at 402 Arts Collective. According to the venue’s website, Mavis has been recording and refining his original songs with studio coordinator Cody Bailey at 402 Recording Studio. Mavis is a graduating senior at Omaha Street School, a faith-based school for at-risk youth. The show begins at 7 p.m. and is free to attend. RSVP here.

For a full listing of shows, check out our events page here. As always, feel free to hit us up with news tips, story ideas or events at news@hearnebraska.org.