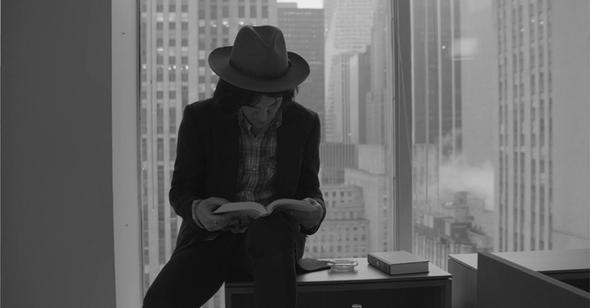 Happy Friday. How about another round of Conor Oberst’s dystopian, grayscale penthouse universe to ring it in?

Oberst released a video for “Common Knowledge” this morning in the same aesthetic and setting as the one for “Zigzagging Toward The Light.” Both songs are on Oberst’s summer solo album Upside Down Mountain.

Construction-wise, this video is probably more interesting than its predecessor: a collage of events and people (some Oberst and some not) half-acting out the events of “Common Knowledge.” The song itself is a kind of pre-elegy for a self-obsessed alcoholic who’s dead before he’s dead. It’s the poignant closer to an album that starts in a much murkier place and climaxes with more biting songs like “Kick” and “Governor’s Ball.”

Yesterday on the site, we compiled (as best we could) a run-down of forthcoming Nebraska releases. Mostly, this constituted LPs and EPs, and we grew a list of a few dozen.

We’d like to make this a working list at least for a few weeks, so email news@hearnebraska.org if you have an upcoming release you want us to know about.

It’s another big weekend for shows in Nebraska.

Jake’s Block Party is going down in Benson tonight. The cigar bar is closing down Military Ave. for a show featuring Icky Blossoms, Snake Island!, Purveyors of the Conscious Sound and The Superbytes. There will be food from Voodoo Taco and Lot 2 and a beer garden until 2 a.m. The whole thing starts at 6 p.m. Cover is $7. Get all the info here.

Orenda Fink has an in-store appearance at the Saddle Creek Shop tonight in Omaha to kick off the tour for her album Blue Dream. The free show starts at 7 p.m. and Fink will hang around after to sign records. The Shop has her whole discography in stock. RSVP here.

Outside of Lincoln and Omaha, Midwest Dilemma will play in Brownville at the River Inn Resort. Midwest Dilemma released one album in 2008, Timelines & Tragedies, a collection of folk songs that trace bandleader Justin Lamoureux’s family tree from fur traders crossing the Atlantic to the present. Brownville is south of Omaha, a little more than an hour, on the Missouri River. It’s an hour and 20 minutes from Lincoln. RSVP here.

The Talbott Brothers play in Broken Bow tonight at Sylvester’s Lounge, one of their many Greater Nebraska shows. Broken Bow is two and a half hours west of Lincoln by Interstate 80.

Three Nebraska bands are playing Pü Fest at Empire Hall in St. Louis this weekend. Digital Leather, Plack Blague and Worried Mothers will all appear at the Sept. 6 and 7 festival. Appropriately, the festival lineup emphasizes punk, experimental and psychedelic music.