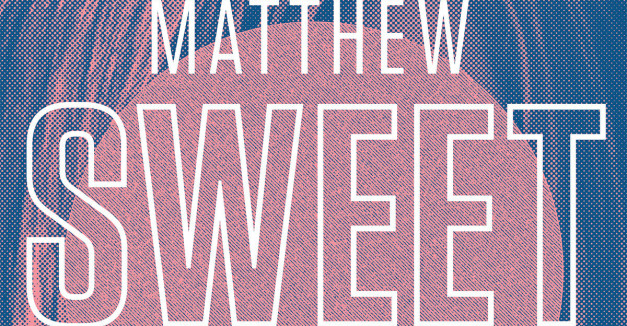 We plan to make Hear Hear an annual, can’t-miss fundraising event for anyone interested in supporting Nebraska’s music community, fostering original art and experiencing a one-of-a-kind show featuring world-class talent. And this is a great way to kick it off.

Tickets start at $45. VIP is available for $100. The fundraiser will include a silent auction featuring prints of some of Hear Nebraska contributor’s best concert photography. VIP tickets include reserved seating, a meet-and-greet and photo with Sweet and a limited-edition, screen-printed poster from the event signed by Sweet himself. All proceeds benefit Hear Nebraska.

Sweet, born and raised in Nebraska, rose to national prominence in the early ‘90s with his album Girlfriend. The title track from the album reached the number 10 spot on Billboard charts. The current Omaha resident has since released 10 studio albums. His latest release, 2011’s Modern Art, met critical acclaim as a carefully-crafted pop record. Sweet has a new record on the way. He will perform with a full band.

Omaha’s The So-So Sailors will open for Sweet. With a clear appreciation for ‘60s lounge and R&B aesthetics, the band’s piano-rock ballads are an astute pair with 1200 Club’s jazz-club atmosphere.

The 1200 Club in Omaha’s Holland Performing Arts Center offers a unique environment to see musicians who generally play crowded concert halls. In 2013, Hear Nebraska hosted its Live at 1200 Club with NET there, featuring Kill County, Digital Leather and Big Harp. The result was a personal show for audience and performer alike, stripped of environmental distractions often present at rock shows.

Tickets are limited. Get them at Ticket Omaha. And RSVP on Facebook here.

Omaha’s Staffers, a lo-fi solo project of Ryan McKeever (Skeleton Man, Telepathy Problems), has a new release out on cassette tape. And it’s in good company.

In December, we wrote about the persistence of cassette tapes and tape labels in Nebraska music. It’s an affordable way for artists and small labels to release physical copies of music that functions as a collectible or piece of art itself. Like vinyl-lite.

Over the weekend, Unread Records released Staffers’ debut full-length Good Message, Poor English. The album features both “California Squatters” and “From the Attic,” previously released on a Staffers 7-inch in May.

Pittsburgh-based Unread has a history with Omaha, having released tapes for Simon Joyner, The Prairies, Noah Sterba (Yuppies), Razors, Nathan Ma and more. Label executive Chris Fischer used to live in Omaha, according to Lazy-i.

For Unread, cassette tapes aren’t making a comeback. They never went anywhere. The label has been releasing tapes since 1994, its tapes quietly enduring through the rise and fall of CDs, the proliferation of iTunes and, now, streaming services.

That’s not to say you can’t listen to the new Staffers album on Bandcamp (and buy the cassette there, too).

Good Message, Poor English wanders aimlessly through a hazy Omaha of basements, divebars and dilapidated streets in the spirit of peers like Yuppies: distorted guitars hang loosely from skeletal track structures. Vocally, the best local touchstone might be Joyner with a penchant for slacker-droning and lyrics that would read like everyman prose.

NPR has been accepting entries to perform in its office as part of the Tiny Desk series, which has hosted the likes of T-Pain, Saintseneca, Adele, Yo-Yo Ma and more. The deadline is today.

For his, Whipkey visits an elementary classroom to play the title track from his forthcoming album Underwater.

Ojai takes a more stripped down approach, like dipping in on home-rehearsal.

The Derby Birds spread their four pieces out in a dark and stylish office for “Tightwire.”

We’ve got a fresh playlist on HN Radio this morning kicking off with Dereck Higgins. We’ve also got a track from Darren Keen’s new EP Roland is My Co-Pilot, Ted Stevens Unknown Project, Edge of Arbor, Capgun Coup and Betsy Wells.

Tune in at the top of any page on our website.