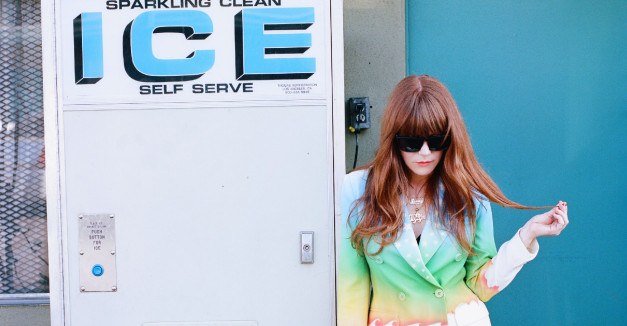 [Editor’s Note: The Jenny Lewis show at Slowdown tonight has since sold-out.]

I found myself standing on the busted concrete in the damp basement of Omaha’s Middle House watching Columbus, Ohio, band All Dogs play the sad, loud, high-energy power-pop songs for which frontwoman Maryn Jones unnecessarily apologized because I received a last-minute text from my friend Nick Harris.

The lanky redhead guitarist from indie-rock-punk band Luther (part of an exciting Philadelphia scene that includes such bands as The Holy Mess, The Menzingers, Cayetana, The Sidekicks and Captain, We’re Sinking) said his other group, All Dogs, was playing in a couple hours at the long-running Omaha DIY house venue. It had been literally 10 years since I last set foot in that debaucherous shithole of critical importance to Omaha music — which, not unlike Helen of Troy, has probably launched 1,000 bands — and I was long overdue.

Outside were a few dozen black-clad 20-somethings waiting for Orange County grindcore band Phobia to play in the giant house’s West Wing. I’d never heard of Phobia, but the internet tells me they have 45K followers on Facebook, and have put out 22 records since 1990 (with just about as many members). Clearly, they’re a big deal in punishing metal circles, and I’m told they had West Wing packed to the gills in a show that also included Lincoln’s Feeder/Gainer.

Around the back of the house — appropriately, the “middle” — I ran into Harris and his bandmates Amanda Bartley and Jones sitting outside a concurrent show that included SLC band Baby Ghosts and Omaha’s The Ridgways. With her unmistakable double-nose ring, I was pretty sure Jones was also the multi-instrumentalist from indie-folk band Saintseneca, and was glad when she confirmed it before I had to ask (potentially risking septum-piercing stereotyping). Saintseneca is justifiably blowing up of late with its ANTI- records debut Dark Arc — produced in 2013 by Omaha audio wizard Mike Mogis at his ARC Studio. The album’s great. They’re great. Check out their NPR Tiny Desk performance from last week for proof.

Down in the concrete-walled graffitied basement, standing under ductwork held together by garden hose, All Dogs blasted through their 10 or so “sad” songs that didn’t feel at all sad so much as lo-fi DIY punk rock, driven by superb drumming by Jesse Withers (from the Columbus melodic punk band Delay) and Harris’ Lemonheads/Pixies-inspired guitar, with Bartley on bass and Jones screaming indecipherable lyrics (due to the P.A.) and pounding rhythm guitar. Other times, the band sounded more like gentle indie pop — as Jones sang sweetly, softly, backed only by her rung-out power chords.

I’m excited to hear them next time they come through — hopefully in a room with better sound. I don’t care how sad they are.

Here’s some of their recorded stuff (before Harris joined the band):

Eyebrows popped up in the crowd. Onlooking musicians exchanged a few staggered looks.

Both at O’Leaver’s late Saturday and at Yia Yia’s early show on Sunday, Hollingsworth resided in odd tunings, soloed with his finger slide on and blurred the lines between picking patterns and complete solo breakdowns.

Hollingsworth is roundaboutly connected to Nebraska music in a few ways. Along with Nik Freitas, he’s one of the guitarists in the Mystic Valley Band and appears in the Birmingham band Dead Fingers with his wife Kate Taylor — the sister of Saddle Creek’s Maria Taylor. Kate is also the sister of Macy Taylor, who plays bass in Mystic Valley Band and will be in town tonight playing with Jenny Lewis.

Dead Fingers released its second record just weeks ago, on the heels of its self-titled debut in 2012. As a folk band, they’re something of an oddity with Hollingsworth’s all-time immovable nose voice never leaving Taylor’s, as they sing 95 percent of the set precisely together. Couple that with the striking amount of reverb on Hollingsworth’s guitar and the songs are a little bit like roomy (even spacey) Carter-Cash duets that are scampering so quickly toward their demise, the couple has too much momentum to trade lines.

“Ring Around Saturn” was a winner, but “Lost in Mississippi” was weirder in a hooky way.

The Yia Yia’s show on Sunday was the last of their national tour, a special circumstance set up by Low Horse’s Craig Reier (also a former Maria Taylor band member). Dead Fingers played longer and a little tighter on Saturday, but there was tangible joy on their faces Sunday, squeezed into the back of a pizza place with 40-50 people, sending off a tour among friends.

Jenny Lewis plays Slowdown tonight. Not an hour ago, Slowdown said there were five tickets left. Nashville roots band The Apache Relay opens, as they have on the last few Lewis tour stops. Lewis tours July’s The Voyager, her most recent solo album since 2008’s Acid Tongue and her most recent release since 2010’s Jenny & Johnny, written and recorded with Johnathan Rice. Through the early to mid-’00s, Lewis fronted Los Angeles-based rock band Rilo Kiley. The band released The Execution of All Things (2002) on Saddle Creek, produced by Mike Mogis. She also appeared on Bright Eyes’ Lifted or the Story is in the Soil, Keep Your Ear to the Ground, Cursive’s the Ugly Organ and The Good Life’s Album of the Year.

Lewis has done some really entertaining and revealing press for this album, including this podcast with Grantland’s Andy Greenwald. It includes some premium Ryan-Adams-is-an-awesome-curmudgeon stories.

Unfound Sounds, a monthly vinyl treasure hunt based in Lincoln, Omaha and Sioux Falls S.D., released its fourth round of records this week.

Founder Michael Todd, former managing editor at Hear Nebraska, partners his project with local businesses in each city every month, hiding one vinyl in each locale, posting daily hints until each record is found.

This month you can find The Drop Beneath by Eternal Summers in Sioux Falls, Plays the Piano by McCarthy Trenching in Omaha and Bustin’ Loose by Chuck Brown and the Soul Searchers. Check out the website, read the clues, join the fun.

Josh Hoyer and the Shadowboxers played their homestage Saturday night at the Zoo Bar with Oketo.

As with the band’s album release show at The Bourbon in January, Hoyer was decked out in a white suit, signifying the show was going to be something more than running the gamut of 10 or so songs. But really, playing is always something special for Hoyer, as he stands at his piano, hands held aloft, commanding the audience in a hellfire-and-brimstone sermon for the working class.

Hoyer played to a packed house, but Oketo crowded it for him. The young indie-folk band churned out Vampire Weekend-esque pop melodies bolstered by deeply strummed chords and strong sax lines.

Here they are on Hear Nebraska FM a few weeks ago:

Omaha Girls Rock held their second and final showcase for the year Saturday at The Waiting Room. The rock camp uses music as a tool to empower young women. During the week the girls start bands together, learn instruments and write a song. It culminates at the end of the week with a showcase. The Slowdown hosted the first showcase two weeks ago.

Hundreds of parents, family members and community members came out to see women from ages 8-18 play everything from prog rock to Simon Joyner-y folk tunes about empowerment, equality and facing down the odds. Hear Nebraska wrote about a day in the camp last week, exploring how and why OGR can be so vital for young women.