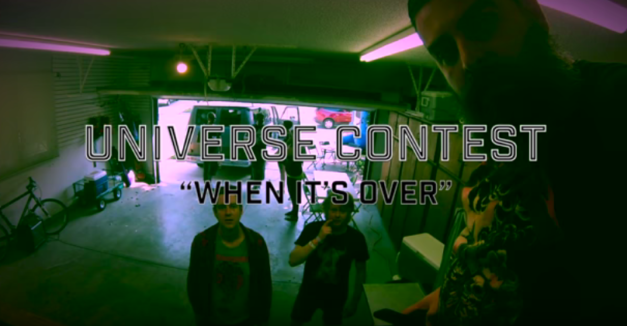 Things have looked differently for Universe Contest for a couple of years now. Lineup changes in 2014 meant its once ethereal, skyward-reaching prog rock has given way to a tightly-packed, meatier sound reminiscent of the band’s earlier, punkier rawness.

We’re premiering the video for one of Humpal’s tracks, “When It’s Over,” today. Shot by Zipline Brewing’s Kelly Houchen during a Labor Day party, their performance captures the garage-bound spirit of homebrewing while hearkening back to its own formative years.

Watch the video for “When It’s Over” below:

One night this past summer at Simon Joyner’s house, after Refrigerator was finished cutting tracks for a forthcoming new record, the band took up its instruments again, laying 10 covers down on a single track.

The result, Was it Something We Sang, will release via Shrimper Records on Saturday, Oct 8 for Cassette Store Day. It features 10 covers of songs by The Fall, David Blue, Sam Cooke, Kanye West, Waylon Jennings, Townes Van Zandt, The Cure, Prince & more.

Shrimper’s announcement comes with two other official Cassette Store Day releases. They include a live set from Dump, which features hand-colored art by James McNew, and a quiet folk cassette by Folktale Records CEO and singer/songwriter Whitman, for which Shrimper boss David Callaci (a long-time Joyner collaborator) hand-painted art.

Established in 2013 and inspired by its Record Store kin, Cassette Store Day is an international, annual observance of the music medium’s value. Homer’s Music & Gifts, 1210 Howard St, is an official participant this year. See the full listing of stores, releases and events at the Cassette Store Day website.

Applications are now open for the organization’s Individual Artist Fellowship program in four areas of artistic discipline: Music/Sound, Choreography, Filmmaking/Screenwriting and Theater/Playwriting. The program supports Nebraska artists through public recognition and monetary awards of up to $5,000. The program rotates annually to highlight different disciplines, and will highlight Nebraska literature in 2018 and visual arts in 2019.

Applications are open now until November 15. A professional, out-of-state panel judges artists work. Applicants must be 19 years-old, hold two years prior Nebraska residency and must maintain residency throughout the fellowship year. They must also not be enrolled in an undergraduate/graduate program in their applied-for discipline.

And you know Tuesday means the hot combo of Dad’s $1 beer night and live music at Duffy’s Tavern. Tonight, it’s a Plack Blague takeover, as the industrial DJ works through mixtape variety night. As always, there’s no cover, so donations are accepted (use the cash saved on that cheap Busch Light). RSVP here.

Plan the rest of your weekend in shows with our statewide calendar here. Send all news tips, story ideas and song submissions to news@hearnebraska.org.