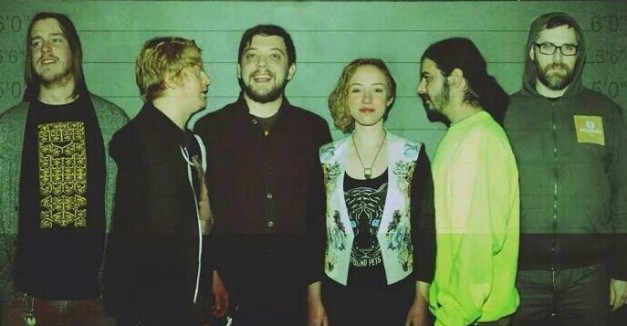 Universe Contest made a pair of big announcements yesterday, including a hint at new music and a big opening gig.

The Lincoln prog rock band dropped the news that it would be recording a split vinyl with Omaha band Gordon. That session will take place above Zoo Bar — presumably, based on the post, with engineer Mark Wolberg — and will likely yield the first set of recordings since Universe Contest’s big lineup shuffle last October.

Universe Contest also announced it’s next show, an opening slot (with Gordon) for Titus Andronicus and The Hold Steady’s Craig Finn at Lookout Lounge March 11. It’s a good get for both the band and concert booking tandem Perpetual Nerves, which has filled that venue lately with a handful of big shows, including last Sunday’s Car Seat Headrest show.

RSVP to that show here. To tide you over, here’s the latest Kibler’s Corner, featuring Universe Contest bassist Saber Blazek and his nunchucking skills:

[Editor’s note: an earlier version of this story reported that the bands were to record a split cassette.]

Legendary Omaha songwriter Simon Joyner’s career retrospective lyric compilation Only Love Can Bring You Peace is now available at Solid Jackson Books, as well as online from Magic Helicopter Press. The book comprises images and characters of more than 15 albums, EPs and other releases. Each chapter features an illustration of a lyric or album by Joyner’s artist friends.

Almost Music will host a book release party January 2 at 8 p.m., for which Simon Joyner and the Ghosts will perform with David Nance and L. Eugene Methe. From the foreword, by artist Dennis Callaci:

“This is a book written over the course of twenty-five years, wherein Joyner has boiled the grass, branch and bone of a lifetime of work down to next to nothing right there in the title. The name of this book is Only Love Can Bring You Peace, and knowing the kind of person he is, it is dedicated to you.”

If you’re planning to attend Knickerbockers farewell show, it’d be wise to jump on tickets now.

The longtime 9th and O venue gave notice yesterday that all online tickets for the December 26 concert have been sold. The remaining handful are still available in person at the Knickerbockers box office.

Tonight, Christopher The Conquered plays night three of his December residency at Slowdown. Songwriter Chris Ford will perform solo, and as one-half of pop/performance art duo Gloom Balloon with Patrick Tape Fleming. Matt Whipkey, who just recently opened for Heart, has been added as opener. RSVP to the 8 p.m. show here.