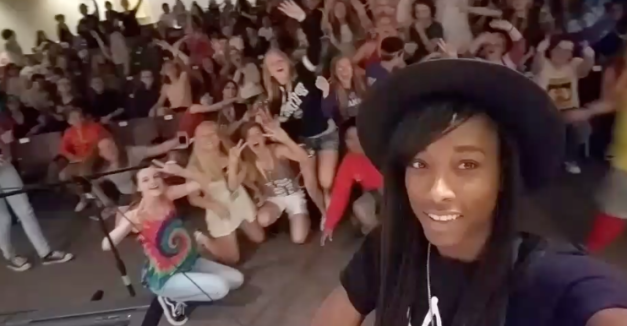 Twinsmith, CJ Mills and Cat DeLuca performed at the Council Bluffs junior high Tuesday. The concert was planned, booked and executed by the school’s musicology club, a group started by Kate Dussault and Sam Parker of Omaha’s Hi-Fi House.

“It was really cool to play a show and then be given pizza and chocolate milk,” said Twinsmith bassist Bill Sharp. “We all signed a bunch of autographs and took a lot of pictures and hopefully got those kids’ summers off to a good start.”

Dussault says the idea for the club came organically over the past summer, after she and Parker were connected with Woodrow Wilson teacher Matt Twit, himself a musician. They discussed a rather informal musicology class designed to explore kids’ interests and introduce them to new music.

“The goal was to show them the endless rabbit hole that is music, that it would take more than one lifetime to listen to it all and that starting early would just lead to beautiful, endless roads they could explore forever,” Dussault says.

The group met every Tuesday afternoon throughout the school year, beginning in September. It split time between Hi-Fi House and the junior high. Dussault says they were assisted by Omaha musicians Dereck Higgins, Scky Rei, Kait Berreckman, John Ochsner and John Klemmensen — all who made visits to the school or ran sessions at Hi-Fi House with the kids.

The club goals are twofold, also focusing on practical, non-performance ways to become involved in the music industry. Dussault says an important component of that is simply knowing tons about music and its ins and outs.

“The kid that knows the most usually gets the job, whether it’s the curator, receptionist, lawyer or manager, Dussault says. “There are thousands of music-related jobs kids don’t know about and too many think performance is the only path and get deterred from their passion too early.”

To that end, Parker and Dussault wanted the club to take a concert from idea to realization. After getting the thumbs up from principal Kim Kazmierczak, the club shifted listening assignments locally, finally settling on the aforementioned trio of acts.

The club also learned first-hand from Parker about contracts, riders, venues, interviews, promotion, graphic design — everything that revolves around hosting a concert. Dussault says the students were eager to learn from him, taking the challenge head-on.

The show went off without a hitch. Dussault says the artists embraced the concert wholly and made it a proper celebration. Sharp echoes the sentiment.

“I really loved playing in a room that ended up being littered with candy wrappers and water bottles instead of beer cans and fireball shooter,” Sharp said. “Those kids are all real cool.”

Lincoln indie rock band Oketo played Manhattan’s Bowery Ballroom Wednesday night on its way through New York for its northeastern tour. Before heading down to D.C., DeLair linked up with NPR via another Nebraska-native.

As you may have heard around the water cooler, it’s going to be hot this weekend. If you’re not outdoors for Folk & Roots Festival (where it looks to be a balmy 100-degrees), cool off indoors with some live music.

The Minor Third’s sampling is below. View a fuller listing of shows at our statewide calendar here. If you do not see your show or one you plan to attend, leave it in the comments or add it yourself via our Contribute page here.

Gregory Alan Isakov headlines Nebraska Folk & Roots – For a second straight year, Branched Oak Farms provides the idyllic setting for this largely folk-based festival. In addition to a stacked lineup of great local and regional acts, there will be tons of local vendors, activities and musicians workshops to enjoy. View our comprehensive media guide here. Of note: organizers are allowing coolers of ice only into the grounds, as well as empty water bottles (for purified water provided by the festival). Stay safe. RSVP here.

Omaha Entertainment & Arts Awards Summer Showcase – More than 70 bands will converge on Omaha’s Benson neighborhood in one of the largest weekend’s in Nebraska music. In addition to serving as a kind of proving ground for OEAA honors, granted by attendees’ votes, fans will be able to cast their vote for a slot in first-year New Generation Music Festival. That one takes place Friday, Aug 5 at Stinson Park. View the full lineup here.

J Rods String Band, Range Maggots, El Jefe at Gillie’s Bar – The HN editorial crew heads to Kearney today, and yours truly will stop by Gillie’s this afternoon to scope it out before tonight’s show. Come and say hello. RSVP to the 9 p.m. show here.

Cultural Attraction reunites, with Little Brazil and Sons of O’Leaver’s – Guitarist/bassist Mike Tulis has been playing in bands since 1993, the time Lazy-i blogger Tim McMahan refers to as Omaha’s first golden age of indie rock. The club hosts the reunion of his band Cultural Attraction tomorrow night. McMahan wrote about Tulis’s 25-year career for The Reader in an article that published yesterday (read it here). Little Brazil — set to drop an album later this year — and Son’s of O’Leaver’s open the show, which starts at 9:30 p.m. RSVP here.

Brother’s Lounge celebrates 50th anniversary – Open since June 1966, Brother’s Lounge has evolved from seedy boys club to alt-culture haven. Watch the site later today for a look at Brother’s through its unconventional custom jukebox. Minnesota’s Jaw Knee Vee, Lincoln’s Plack Blague and Love and Rockets tribute band will perform. The show is 21-plus and entry is $5. RSVP here.