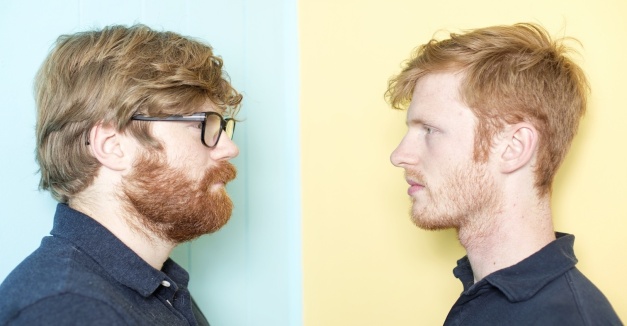 Shawn Foree of Digital Leather is at it again. After releasing a split LP with The Hussy earlier this year on FDH Records, Foree and Bobby Hussy spent a week together to write and record a side project called TIT, whose debut dropped today, again on FDH.

“This collaboration is a perfect mesh of pop sensibility, dark gloomy undertones, and experimentation that you would expect from this team,” says the press release. “The 4-song EP features Bobby on lead vocals for two tracks, Shawn on lead vocals on one song, and a nearly 9-minute instrumental.”

The LP is limited to 666 copies — 166 on Yellow vinyl / 500 Black vinyl. I ordered my copy from the label months ago and still haven’t received it, though I’m sure it’ll show up in my mail box any day now (*looks at watch, stares longingly at wall calendar*). Until then, I’ll just have to listen to it streamed version below from the TIT Bandcamp page, where you can buy a download or order the vinyl.  So when is TIT going to make its Omaha debut?

I’m out of the loop when it comes to these Reptar guys, but I’m sure someone told me that one of them moved to Omaha. Well it probably wasn’t the one who’s in Semicircle, who today dropped their new LP, Blown Breeze, Grown Grass, and We are Part of the Earth (self release). The Reptar members in Semicircle are Andrew McFarland and Ryan Engelberger. Either name ring a bell? Not with me, either. Anyway, Noisey is streaming the whole album here. And you can check out one of the tracks below: