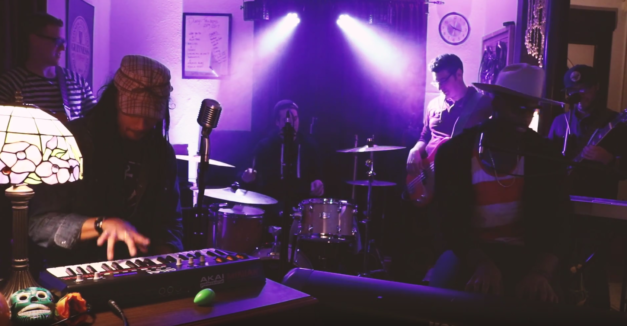 NPR Music’s Tiny Desk Concert contest has wrapped for 2017, and while they judge from an entry pool of thousands, we continue to hear from Nebraska artists who have submitted homemade videos.

Among them are Lincoln rock/hip-hop band AZP, folk band Ozark Hutch and singer/songwriters Andrea von Kampen, Alli and I and Mark Haugen. All submitted theirs just under the January 29 deadline, joining artists across the country striving for recognition as an “undiscovered” talent by NPR’s Bob Boilen and crew.

Von Kampen is of course no stranger to the contest, having landed inside the Top 10 finalists of last year’s entrants. This year, she entered a video for “Desdemona,” the title track from her latest EP, filmed by frequent collaborator Brent Scott Maze inside The Bay. Watch below:

The Omaha House Fest lineup and schedule has been finalized and as promised, it features a wealth of young local talent and regionally touring indie rock bands.

The festival, produced by independent label We’re Trying Records and hosted by Lucy’s Pub, takes place on two “stages” (garage and basement) March 17-18. The poster below lists all 30 bands and set times.

Notably, all House Fest proceeds will be donated to benefit an organization to be determined by attendee vote. Find the public poll here, and RSVP to the event here.

Lincoln contains one of the largest immigrant populations in Nebraska, many having fled conflict in their original homes. In a show of support during a tough political climate, the Lincoln Symphony Orchestra is offering complimentary tickets to immigrant and refugee families for its upcoming production of Fairy Tale Fantasy. The program is an extension of the LSO’s past work with Family Literacy, a Lincoln Public Schools program, which seeks to make live classical music more accessible to Lincoln’s immigrant and refugee communities.

“We call ourselves Lincoln’s Symphony Orchestra with an apostrophe ‘s’ because our goal is to belong to our community,” said Music Director Edward Polochick. “Regardless of upbringing, faith, language, or country of origin, we believe that music can speak to the deepest parts of the human experience, and I am honored to share this incredible art form with all members of our community.”

The LSO also earned a Challenge America grant from the National Endowment for the Arts which provides opportunities to communities whose access to art programs are limited by geography, ethnicity, economics or disability. The LSO’s decision to extend the program and offer complimentary tickets came as a result of new partnerships with Lincoln organizations who are already working to support refugee and immigrant families.

Fairy Tale Fantasy is a family concert that will take place this Sunday, February 5th, at 2:00 pm at the O’Donnell Auditorium at Nebraska Wesleyan University. Activities for children and families will start at 1:00 pm in the lobby. The concert features classical music favorites like The Marriage of Figaro and The Typewriter, as performed by the LSO, as well as giant puppets which will act out classic fairy tales like Rapunzel and The Gingerbread Man.

For more information about the immigrant and refugee program, you can call (402) 476-2211, or visit the LSO’s website here.

Tonight, Los Angeles-based trio Cherry Glazerr comes to Slowdown. Fronted by 20-year-old Clementine Creevy, the indie rock band is loud and crisp, hot on the heels of its Secretly Canadian debut Apocalypstick, which was recorded with Joe Chicarelli (White Stripes, The Shins, The Strokes) and Carlos de la Garza (Bleached, M83, Tegan and Sara). The result is a step forward from its more raw Burger Records days and one that has national publications buzzing. Fellow L.A. act Slow Hollows joins them on tour. 9 p.m., $14, all-ages front-room show, RSVP here.

Also tonight, a trio of touring acts in Harrisburg, Penn., band Young and Heartless, Philadelphia’s Kississippi and North Carolina-based Museum Mouth heads through Milk Run. You might remember Kississippi from the last time they came through Nebraska, playing at The Commons and doing a light-hearted Crossfade with former HN intern JP Davis; view it here. 9 p.m., $10, all-ages, RSVP here.

Find a fuller listing of shows on our statewide calendar here. Send all news tips — upcoming releases, touring info or other goings-on — to news@hearnebraska.org.