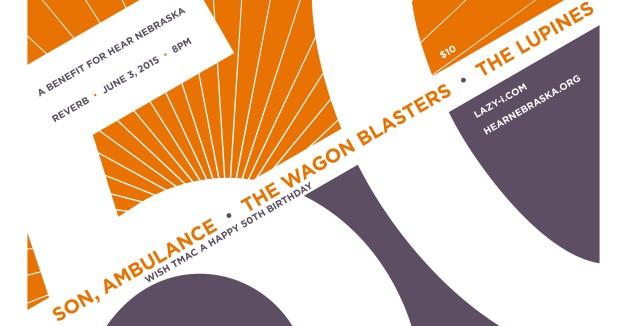 As HN board member Tim McMahan reaches his golden birthday, we’re breaking out some of his loudest Omaha favorites.

Omaha bands Son, Ambulance, The Wagon Blasters and The Lupines will join us at Reverb Lounge on Wednesday, June 3, for our benefit concert.

McMahan has dutifully operated his Omaha music blog, Lazy-i, for more than 25 years, offering insider commentary on local scene news and live shows. In February, he launched a weekly podcast, which features interviews and audio versions and extrapolations of the blog content.

Son, Ambulance has been intermittently active since releasing Someone Else’s Deja Vu via Saddle Creek Records in 2008. The Wagon Blasters recently played a live Record Store Day show, their first in a few years, at Almost Music. Likewise, The Lupines have been relatively quiet lately, playing a handful of shows since releasing Over The Moon in early 2014.

If you haven’t visited Lazy-i before, take a spin through the blog here, and listen to the Lazy-i podcast here. This week, McMahan and local music writer Chris Aponick review new albums from Courtney Barnett, Waxahatchee, John Klemmensen and the Party and Simon Joyner. Plus, the above show announcement and a run-down of upcoming shows.

We have finalized the lineups for our inaugural Good Living Tour, announcing the date and billing for the tour’s ninth stop, Grand Island, this morning.

Icky Blossoms, Simon Joyner & the Ghosts and AZP will all perform on another dynamite lineup at a yet-to-be-determined downtown location. As with all Good Living Tour stops, the show will be free and open to all ages. View the complete listing of tour stops and bands below.

The Good Living Tour will spin through nine Greater Nebraska communities from July 17-25, bringing three original and diverse Nebraska music acts with ties to each stop. Our aim is to celebrate these communities as fertile ground for creativity and innovation.

Omaha Performing Arts has revealed the winners for its Once-inspired songwriting competition.

According to a recent press release, Luke Heffron and Drew Nenemen, both of Omaha, were declared winners in their respective age divisions, and will perform at the Omaha Performing Arts Songwriting Showcase this Monday at the Waiting Room. RSVP here.

Immediately preceding the performance, a panel of local music industry figures will discuss the keys to developing a successful music career and will field a Q&A session. The panel will feature Orenda Fink, Matt Whipkey, Mike Mogis and C.J. Olson, director of marketing at Saddle Creek records. The aforementioned blogger Tim McMahan will moderate the proceedings.

In addition to performing in the showcase, each winner will receive the opportunity to record a free demo of their respective songs to be produced by Mogis at his world-class ARC Studios. Heffron, 17, placed first in the 13-18 age division with his original song entitled “Forget Myself.” Nenemen, 29, topped the 19-29 age division with “Another Love Song.”

Once charts the love story of a “Guy” and “Girl” who bond over their shared love of music. The 2007 film won the Academy Award for Best Original Song, “Falling Slowly.”

For a fifth straight year, Omaha Performing Arts will present Jazz on the Green at Midtown Crossing this summer.

The popular free outdoor concert series will feature live jazz every Thursday at Turner Park from July 9 to August 13. The lawn opens at 5 p.m. each night, followed by various pre-show entertainment on most nights, before concerts begin at 7:30 p.m. See the complete schedule below:

There’s a healthy slate of shows tonight for a Wednesday, including Plack Blague at Zoo Bar and Whitey Morgan & The ‘78s at Waiting Room. Check out our fuller listing here, and if we’re missing upcoming shows, let us know, or submit them with our “Contribute” button.