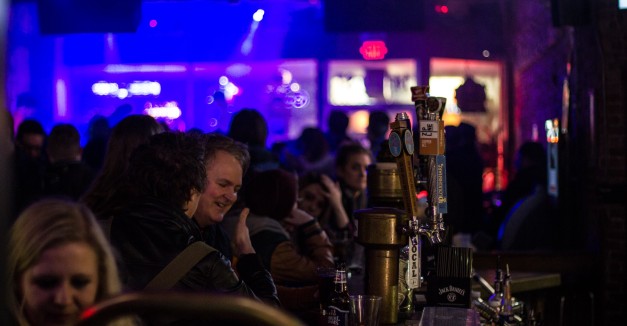 It was lineup-diversity galore as Lincoln Exposed rolled onward last night, ramping up the excitement with 20 acts across its four venues. Acts spanned four generations last night, from young rising acts like Ambulanters, the Wildwoods and This Machine Kills Vibes to elder statesmen in Dr John Walker.

In between, we heard everything from Laughing Falcon’s deafening roar to the blét’s earnest dream pop on the Duffy’s Tavern stage. Next door at Bodega’s, the static viewer saw the eclectic billing of Jazzocracy, Bud Heavy & the High Lifes and Powerful Science on the same stage.

We’ll have fuller coverage of the festival on Monday. For now, view choice photos from last night: 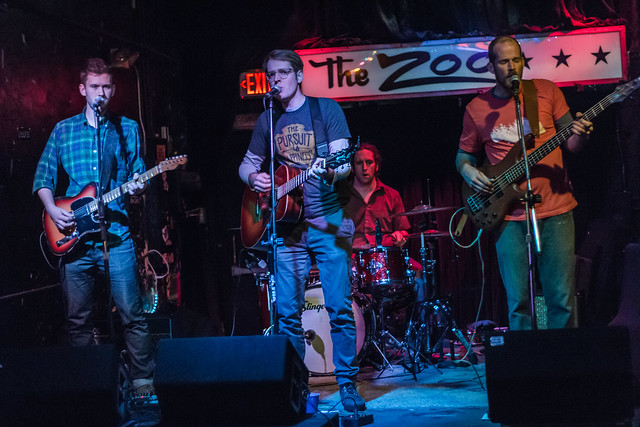 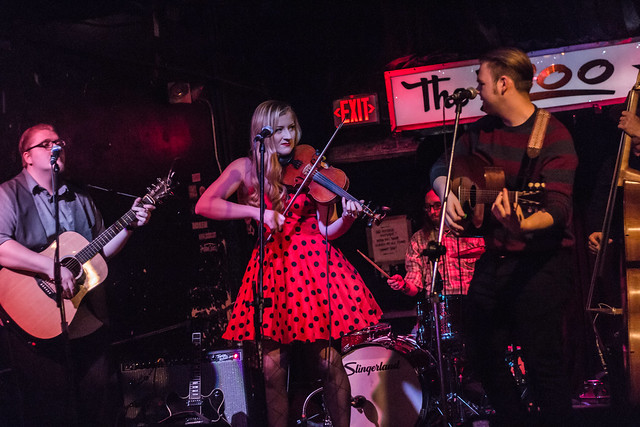 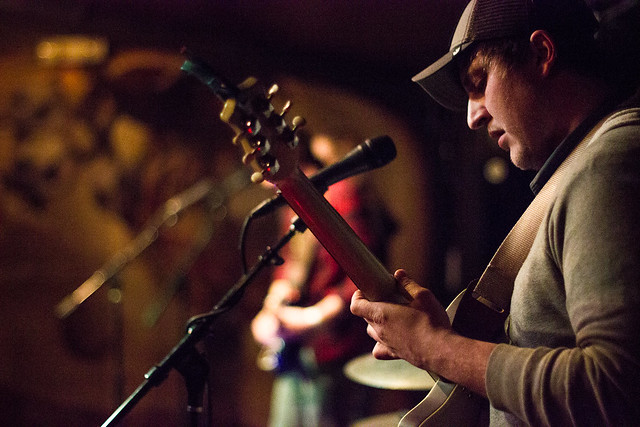 Verse and the Vices 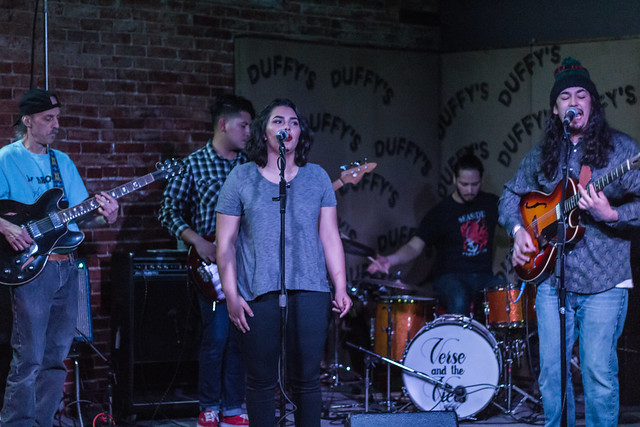 Cassandra and the Told You Sos 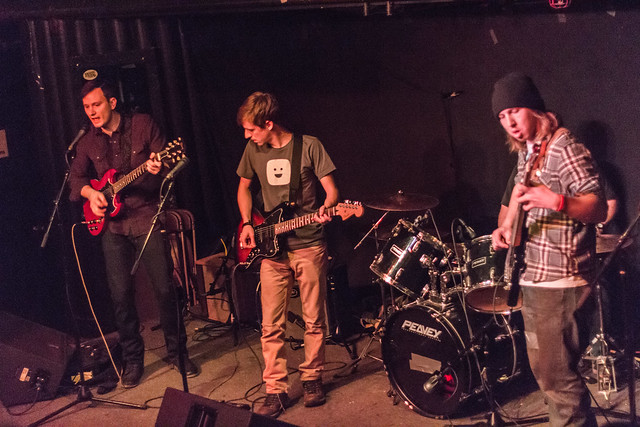 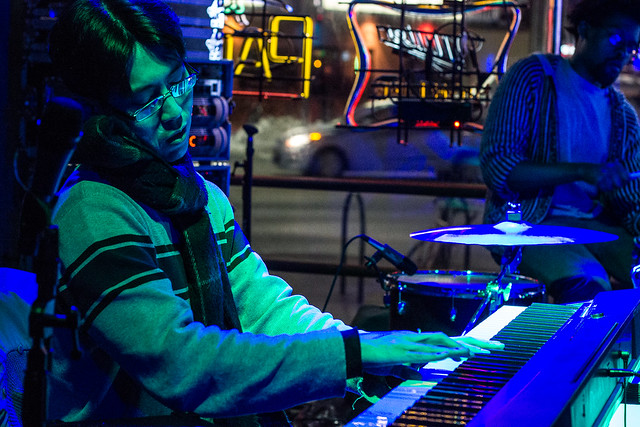 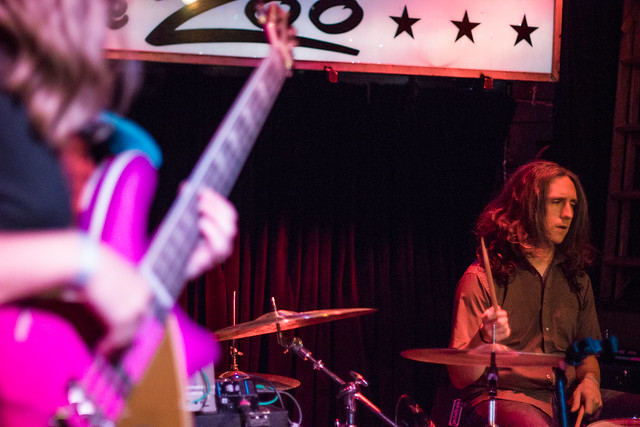 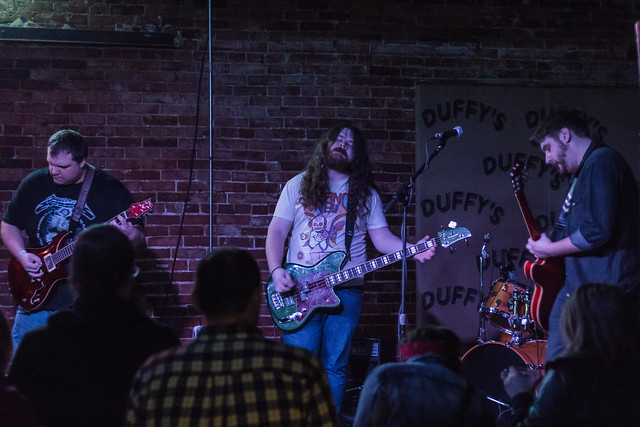 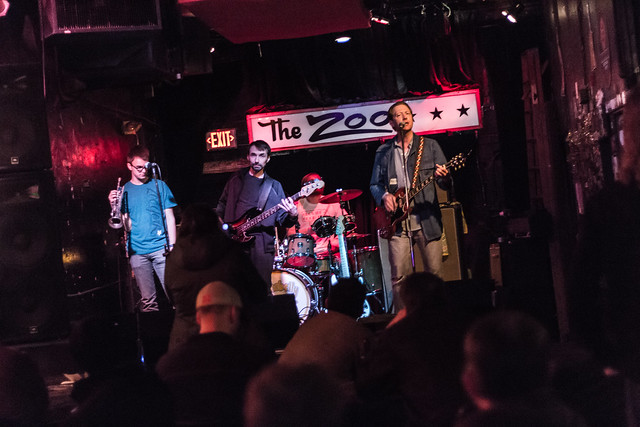 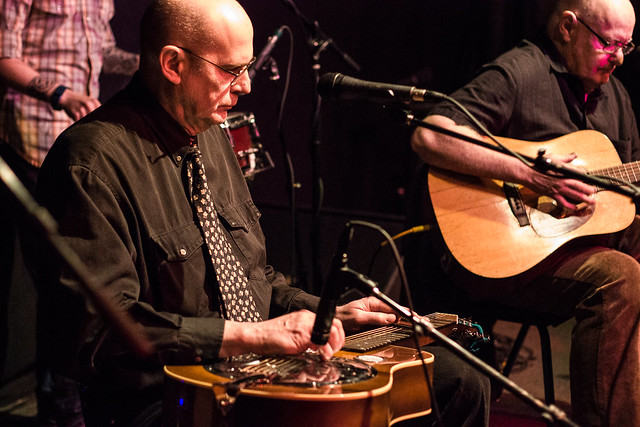 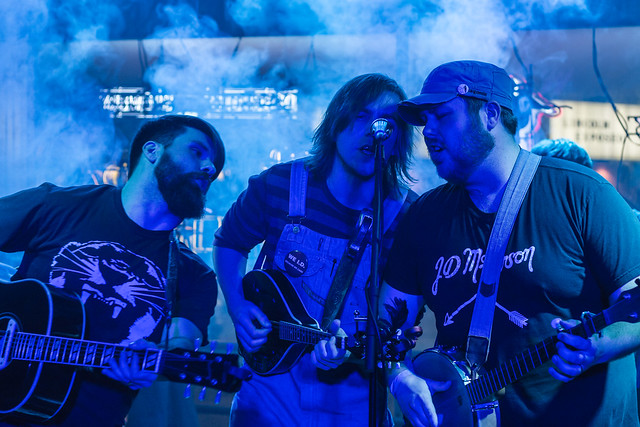 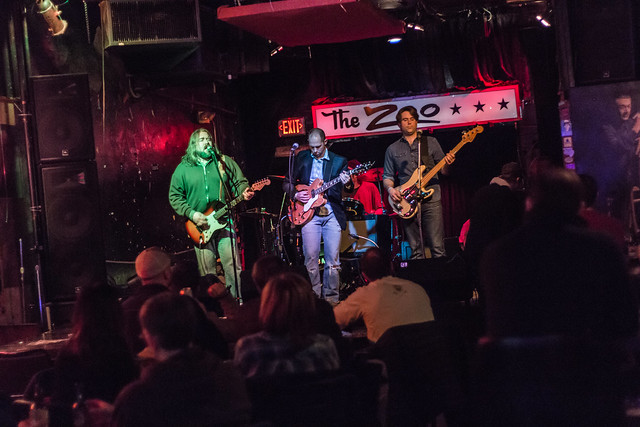 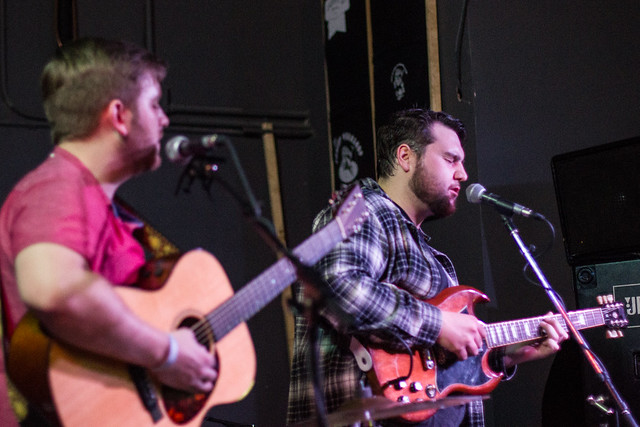 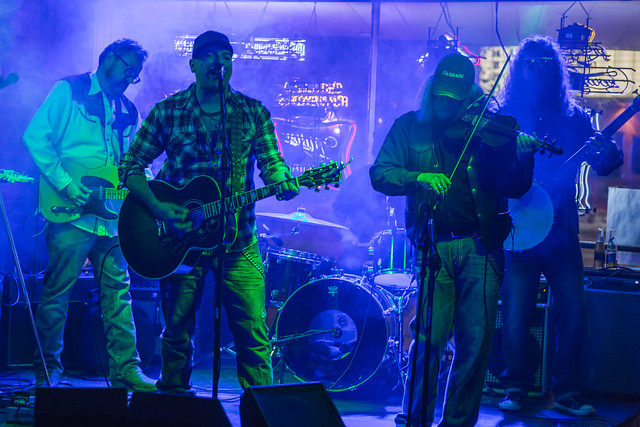 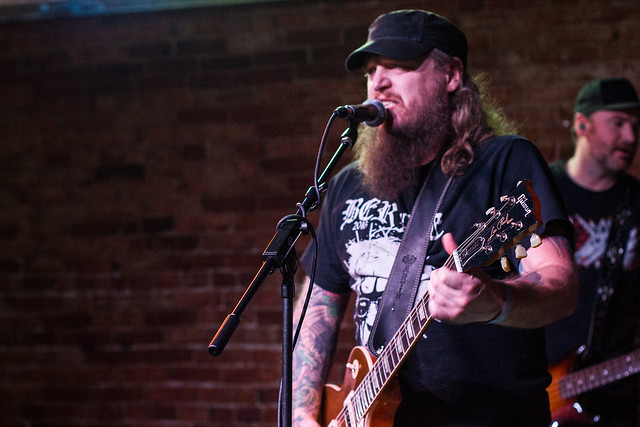 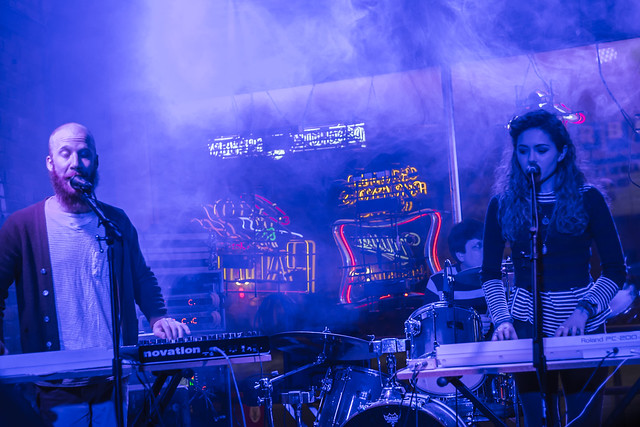 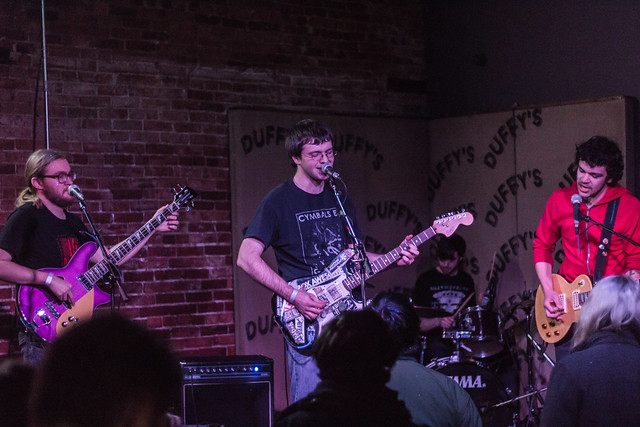 View the entire weekend schedule below:

The cold isn’t keep Stdnt Body from getting a breath of fresh air, nor from representing Omaha on the road.

Raleigh Science Project released the Omaha hip-hop duo’s latest video “Outchea” earlier this week. In the clip, Marcey Yates (aka Op2mus) and Donald Profound (aka Xoboi) name-drop famous rappers and declare their presence outside the Midwest. Everything about it screams confidence, from the duo’s smooth flow to its deliberate gait through the streets of Omaha.

Watch the “Outchea” video below:

Lincoln southern rock quartet Warbonnet released a pair of singles this week, both from its forthcoming album.

M34n Str33ts resident deejay is changing it up for Omaha lonely hearts this weekend.

Sad Boys Lonely Club is hosting SORE LIPS, a broken hearted Valentine’s Day mixer, at The Sydney tomorrow night. Founded by Brian Crow, aka DJ Really Real, and Des Moines deejay Richie Daggers over a few beers, SBLC aims not only to provide a dance-party release, but to give the two deejays a different outlet for their work.

“We have diverse musical taste but the deejaying we normally do is for rappers,” Crow says. “We wanted to do something different.”

The idea for Sad Boys Lonely Club emerged a few years ago when the two were single, hanging out at bars and playing what Crow says was hours of Morrisey songs at a time. It led to SORE LIPS, which Crow aims to continue on a monthly basis.

In the spirit of SBLC beginnings, The Sydney will have $3 Jameson, $2 Rolling Rock and $2.50 Pabst Blue Ribbons. RSVP to the free event here.

“An Airing of Grievances”: All Young Girls Are Machine Guns, Mesonjixx and CJ Mills Celebrate Love and Loss at Milk Run

Whether it’s love or lack thereof, Rebecca Lowry says there’s always something to be celebrated around Valentine’s Day.

This is precisely the mindset that led the All Young Girls Are Machine Guns vocalist and Milk Run co-owner Chris Aponick to organize the Valentine’s Day themed show with performances by Mesonjixx, CJ Mills and Lowry’s band. Saturday’s all-ages show will act dually as a Valentine’s Day celebration for lovers, haters, friends and enemies alike (RSVP here).

“I want it to feel like how you thought of Valentine’s day when you were in third grade,” Lowry said. “When everyone created their own box and everybody got Valentines from everybody.”

There will be cupcakes, pink streamers, a silent auction, a mixtape exchange and a fire pit.

The mixtape exchange will allow people to share music that speaks to their experiences with love. People are encouraged to bring cassettes, CDs and playlists for love of all kinds– old, new, broken, rekindled.

The silent auction will showcase Valentines made by Omaha creatives. Lowry asked people she knows and loves to contribute to the auction– graphic designer Erin Pille, poet Todd Robinson, The Normans and many more.

“I specifically chose people who lead by example,” she said. “Their example of love, as I see it, is something that I would want to give away to somebody else that I love.”

If you end up winning a silent auctioned Valentine, you can either keep it for yourself or give it to someone else as a valentine.

“It could be a Valentine for the love of your life, for your mother or your child, for your arch nemesis,” Lowry said. “It could be something for somebody who really just needs to break up with somebody.”

If your heart has been recently broken or you need to release some pent-up frustration, there will be an Old Flames Purging Bin on the back patio to burn the scraps of lost love.

Lowry describes the fire pit as, “an airing of grievances and a clearing of the soul.”

Ultimately, the event’s purpose is to show that people don’t have to be in love to celebrate Valentine’s Day– that love comes in all forms, and should be celebrated through an exchange of music, art and everything pink.

Lowry encourages people to come celebrate their loves and losses, to give what you have and take what you need.

“Love or the absence of love,” she said. “It’s about giving what you feel.”

Tara Vaughan with The Hottman Sisters and Sarah Benck at The Waiting Room – Vaughan continues the march to her April LP release Dandelion Wine, premiering new single “Blame It On My Youth” earlier this week and appearing on KMTV’s Morning Blend. Sarah Benck was featured as Omaha World Herald “Band of the Week” as she’ll appear with her own solo material. The Hottman Sisters are also working on new music, and will join Hear Nebraska FM in the KZUM studio this Monday night at 9 p.m. RSVP to tonight’s show here.

Razors, Shitgod, Noah Sterba at Brother’s Lounge – The longtime project of Alek Erickson celebrates the release of full-length tape Live At The Laboratory (on Unread Records) tomorrow night at Brother’s Lounge. Shitgod will also have a tape to release, this one on Cat People Records. Noah Sterba rounds out the bill. RSVP here.

As always, head to our statewide calendar here for a fuller listing of this weekend’s shows. Let us know that you’re out and about on Twitter and Instagram using @hearnebraska. And keep those story ideas and song submissions coming.