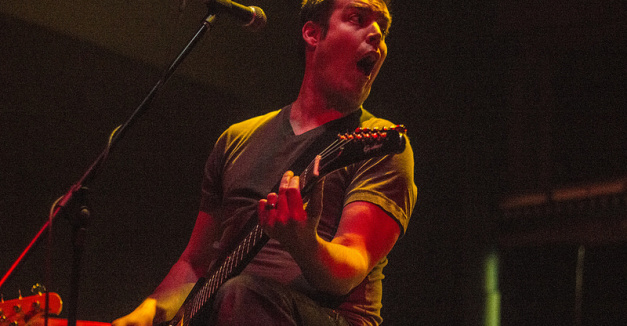 Lincoln electro-pop punk band Thirst Things First released a cover of Depeche Mode’s “Enjoy the Silence” this week in anticipation of their Halloween show at The Bourbon.

As covers go, the 1990-released new wave track is a good pick for the band. The song is darker in tone, even more synth-laden than most Thirst Things First tracks. Mikey Elfers’ voice is not so much whipping through intersections of farcical imagery as it is digging its heels deep into the lyrics. And, of course, the Thirst Things First brand is quietly present: “Words are meaningless, Thirst Things First verse,” he says before shifting to a chorus in the more familiar TTF style.

The single is available on iTunes. Order here.

You can catch The Strange Attractors on Bent Over Neal, a Nebraska film featuring a soundtrack of Nebraska artists.

On Nov. 15, Nebraska Club will host a jazz night, opening its doors to the public. The club overlooks downtown Lincoln from the 20th floor of the U.S. Bank building.

Veteran jazz saxophonist Ed Archibald will perform that night. Archibald is noted for his contemporary jazz techniques (compared to those of John Coltrane), as well as his versatility: He’s comfortable in southern heritage jazz, blues, R&B and more.

Tickets are $10, which includes hors d’oeuvres. Or, two tickets for $76, including two three-course meals. Tickets are available here.

The Kickback, The Hudson Branch, Skypiper and Christopher the Conquered play a stacked lineup at The Slowdown tonight.

Chicago’s pop-rock The Kickback is out on a national tour, playing a handful of dates with fellow Chicagoans The Hudson Branch and Des Moines-based Christopher the Conquered.

Mitis, Crywolf and Bear Grillz play with local acts Sharkweek, Trill Ferrel and Extra Fresh. Between the six artists, the night offers a buffet of house, trap, ambient-alternative and more. The show is $12. RSVP here.

New Found Glory plays The Bourbon tonight. The pop punk act, which emerged in the late ‘90s, released Resurrection earlier this year, its first record after the departure of founding member Steve Klein.

If you listened to New Found Glory in 2004, you’ll find largely the same features to enjoy or despise today as you did then. They play with Nebraska-friends Red City Radio, as well as We Are in the Crowd and Fireworks. The show is $23. RSVP here.