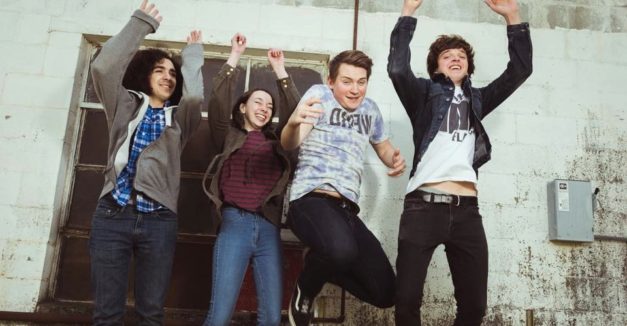 As if the wear of consistent longing for someone isn’t bad enough, it often ruthlessly invites false comparisons. The mind wanders long enough, and it tends to prey on its own insecurities.

In “NVM,” the fifth track on indie rock band The Way Out’s debut EP and today’s premiere, vocalist/guitarist Mari Crisler captures the self-relegation sharply. She sings “You’re a gin and tonic, I’m room-temperature Coke” as if to convince, the juxtaposition as strikingly palpable as crushed juniper.

The Ashland four piece is relatively new, its members — Crisler, Levi Hagen, Reed Tiwald and Nick Ulrich — all still teenagers. Yet already they’ve played together for most of the past five years, through Rock Academy and Omaha’s BluesEd program.

The resulting chemistry is apparent throughout Good Grief. Merging contemporary indie rock and classic pop-punk, the quartet navigates rhythm and tempo changes on the strength of its mobile rhythm section, sparkplug leads and Hagen’s and Crisler’s low-end harmonies. Topped off with production by (now Nebraska ex-pat) Jeremy Wurst — a practitioner of the genre himself with Giant’s Arrow — and the EP makes for a smart, spunky debut effort.

Hear “NVM” below, and get to know The Way Out through our Q&A. Good Grief drops  Friday, May 20 at Milk Run. The Way Out plays with Super Ghost, Mint Wad Willy and Uh Oh’s Joe Champion. RSVP here.

Hear Nebraska: Tell us a little about yourselves. How did you form and when? What does everybody do outside of the band?

The Way Out: Levi and Mari met when they were in middle school, started a band, and have stuck together since then. They joined Rock Academy (OCM) soon after and that’s where they met Reed. After some skillful coercion, he was tricked into joining as well, and he’s been around since 2013. Between then and now was a lot of trying to find our sound and switching instruments and lineups. Just this past summer, Levi met Nick in the Blues Ed program in Omaha and dragged him to band practice, and that’s kind of when we consider our band to have really formed. That’s when we started actually doing things, anyway.

As far as what we’re doing, it’s all music and school. We’re all going in and out of other musical projects alongside this one; Levi plays drums in Tragic Jack and Far and Wide, Reed plays guitar in Metro Fuzz, and Mari plays bass in Death Cow. Levi will be a Senior in high school, Mari and Nick will be college freshmen, and Reed will be a college sophomore.

HN: What about the new EP excites you the most?

TWO: We get the chance to share our music with people and also a chance to really focus on our first full-length LP!

HN: You recorded with Jeremy Wurst, correct? What was that process like?

TWO: Luckily, we basically stumbled into working with Jeremy, and he essentially turned into everything but a fifth member of the band. Recording with him was awesome. We spent two days recording at Studio pH in Lincoln and then did sporadic basement sessions at Jeremy’s house for about a month after that. We really spent the time doing things right, working out the kinks, and making the recordings the best they could be. We think that has made all the difference. 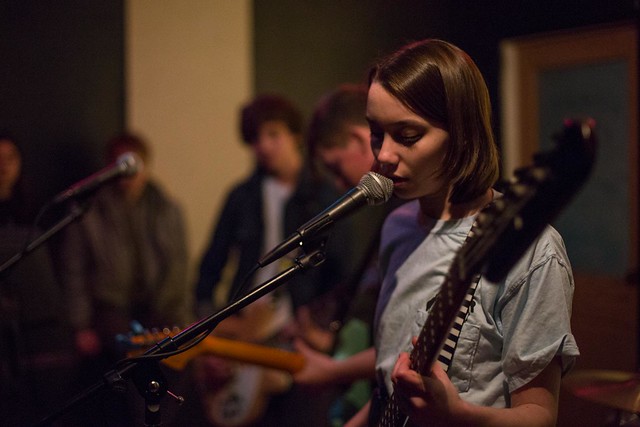 HN: The record has a pretty classic pop punk sound. What influences can you point to that might have helped craft that?

TWO: We spent a lot of time looking for our sound. We take a lot of influence from bands like The Front Bottoms and Alvvays, and lately local bands have been really influencing our style. It really comes from the extremely varied tastes of our band; Reed’s a punk, Nick digs fuzz and blues, Mari likes lo-fi and catchy rock, and Levi rocks nearly everything. We all have really open minds, though, and that’s what really helps us create together.

TWO: We’ll be playing around Omaha and Lincoln in the coming weeks until mid-June, when we embark on our first Midwest tour/adventure to promote the EP. After winding down from that, we’re going to chill out for a while, replenish our funds, and finalize the writing of our first full-length LP!

If you were going to shows in 2012, and around for Lincoln Calling in 2012, you might remember Black Cohosh’s spectacular Friday night finale. You might remember any number of the death-western band’s theatrical performances, whether it was that performance’s backdrop, the 1926 horror/drama Faust, or their giving-forth in front of an actual prairie fire in rural Lancaster County.

If you’re around Lincoln tonight, you might get to re-live a taste of performances past.

Despite its brief career, the instrumental four-piece amassed quite a following in the Lincoln community. It formed in 2011 when a roadbound Jason F and Alex S found themselves in Lincoln, meeting Alex H and Nick shortly thereafter. Jason and Alex S moved to Denver a couple months before the band’s last show, tabling the project until Adam Hintz (event coordinator) reached out.

“He’s always been one of our biggest supporters and fans, and he’s been elbowing us for years to make a reunion happen – but this time, he pitched it as a fundraiser for his quite awesome new project,” Alex H says.

Already the home of a large community garden, Southern Heights Food Forest aims to be the largest Permaculture garden in Lincoln. Permaculture is a method for choosing plants in a landscape which work together just like an ecosystem would.

“Food plants are planted alongside other edible plants which have functions such as pollinator attactors or nitrogen fixers,” Hintz says. “Ideally once the garden is planted the landscape will take care of itself with minimal effort and maximum output. To make Lincoln more sustainable we need tangible examples of ecological design and create community.”

Tonight’s show kicks off the organization’s Give to Lincoln fundraising campaign, which can be donated to here. Entry is by $10 suggested donation. RSVP here.

We asked Alex Houchin to elaborate on why he finds tonight’s show important:

“The simple answer is that both Adam’s Food Forest project and the venue itself directly appeal to the underlying philosophies we all share as a band, whether it’s local community-building and organizing, respectful intersectionality, or sustainable permaculture. I couldn’t imagine a more relevant place to have this event, really – The Commons is always holding skillshares and low- or no-cost screenprinting/bookmaking/dance/yoga/meditation classes and workshops, engaging in important open group discussions on community development such as We Are Vital, and hosting awesome cultural events like last year’s Do-It-Ourselves Fest. It’s such a natural fit.

And regarding the Food Forest itself, there’s another important connection to make. Our band originally came together right around the time the four of us found ourselves participating in Occupy Lincoln – part of a movement which, among other goals, aimed at reclaiming and rethinking public space as a venue for discussing and building consensus on ways to solve the problems and challenges of our times. The Southern Heights Food Forest is a shining example of those ideals: it creates a public space dedicated to educating people about responsible and sustainable food production, it provides a venue for community-building and for inter-family connections to be made, and it also produces nutritious food in the process, to be given to people who need it most.

As climate change and income inequality intensify, and as the socioeconomic cost of relying on fossil fuels increases, it will become more and more costly to have our food shipped from other cities/states/continents/hemispheres – not just in dollars, but in lives! That’s because the people who can afford to keep living this way will, in doing so, contribute to the pollution, sea level rise, and extreme weather disasters that disproportionately affect poor and impoverished humans around the globe; meanwhile, the people who can’t afford it will go hungry and get desperate.  That’s why, much like the “victory gardens” of the second World War, converting our thirsty lawns into “yardens” (as in this recent news story on Hawley Hamlet) can not only reduce our reliance on fossil fuels and increase our self-sufficiency and stability, but also help conserve critical resources as they become more scarce – all while helping more people support their families with access to real homegrown food. Adam is trying to get out in front of this monumental issue, and we are honored and grateful for an opportunity to help support his efforts in any way we can.”

See Dean’s photographs of the night below. 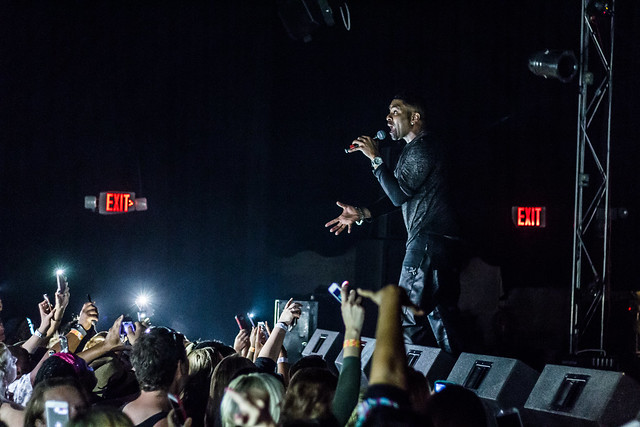 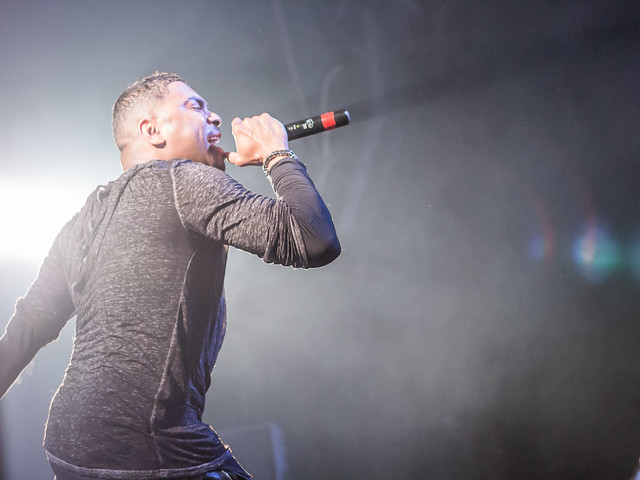 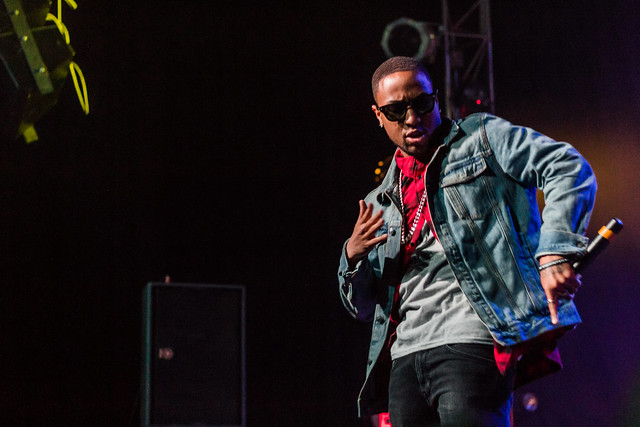 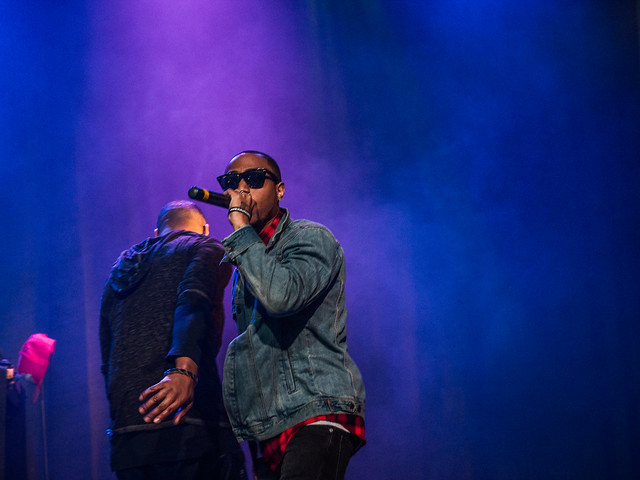 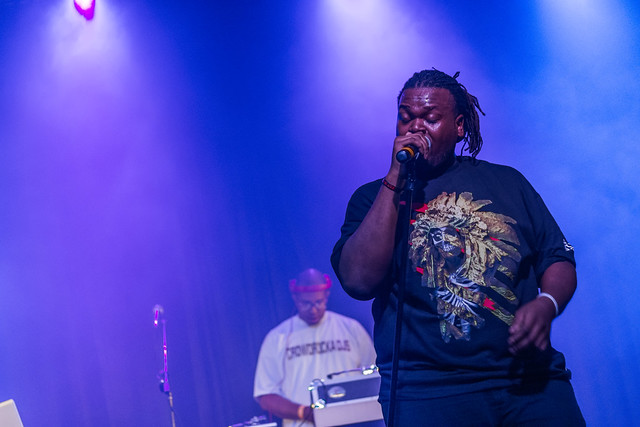 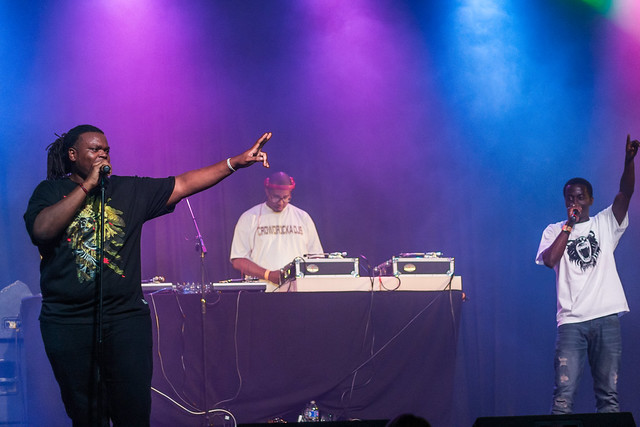 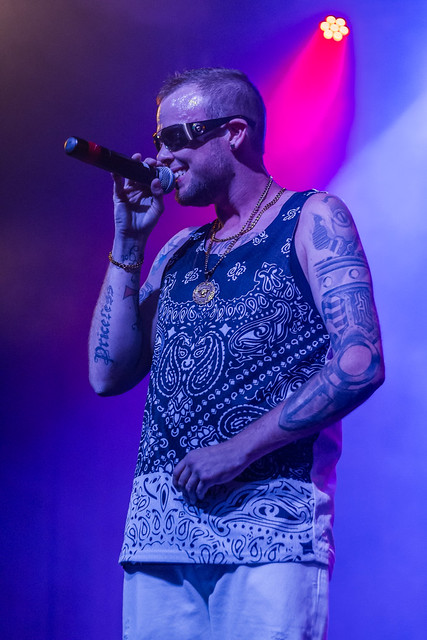 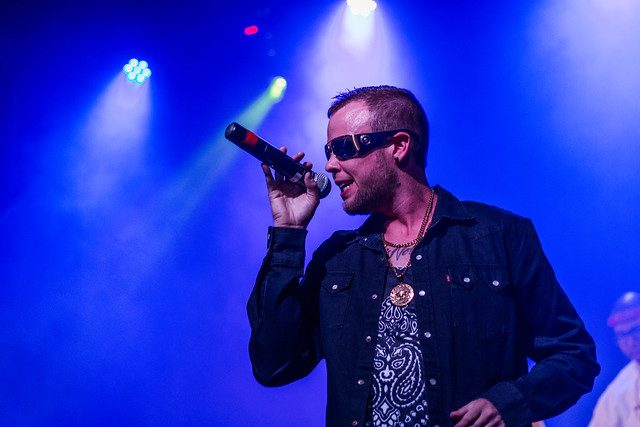 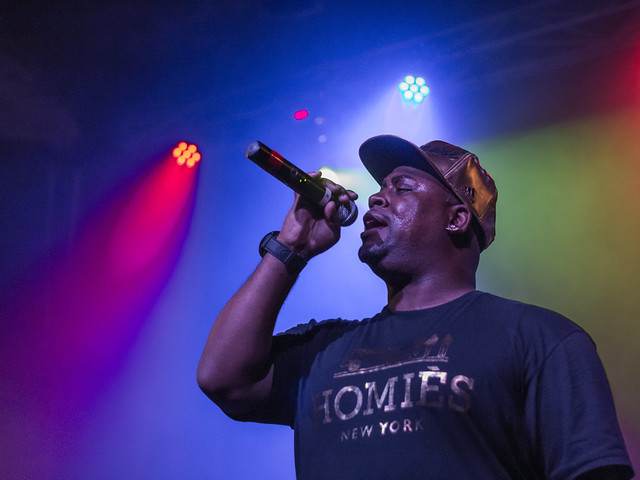 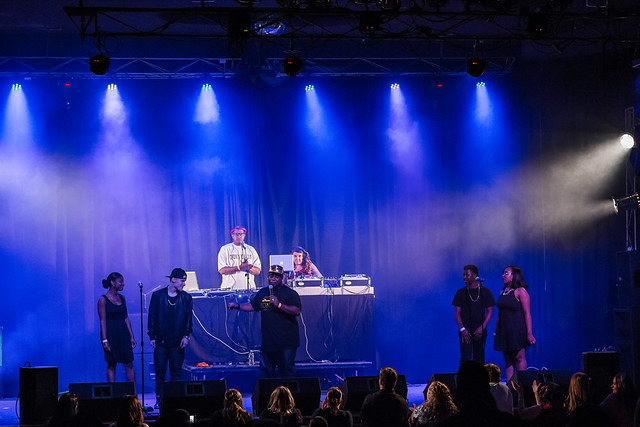 The show starts at 8 p.m. and tickets can still be purchased here.

Also tonight, Chicago-based rock trio The Dead Woods stops in Lincoln to play a show at Duffy’s Tavern, 1412 O St, with Lincoln garage-rock group King Thumper on its “H|TEYF” tour. The May 15 release of H|TEYF: How To Entertain Your Friends, follows The Dead Wood’s 10-track debut from 2014, Seventy Cedar. The Dead Woods is a group of long-time friends and kindred spirits, as they describe themselves, comprising singer-songwriter Mark Wendell, bassist/ guitarist Sean Fagan and drummer Austin Getz.

This tight-knit group taps into unique sonic dimensions in its new release, which can be heard in songs like “I Don’t Have Your Money,” matching Wendell’s longing-to-be-heard lyricism with Fagan’s hard-hitting bass riffs.

The 9 p.m. show has no cover charge, but donations are highly suggested for the touring band as it heads West to Denver, Colo.

For a full listing of this week’s shows, head to our statewide calendar here. If you do not see your show or one you plan to attend, tell us in the comments, add yourself here or email us at news@hearnebraska.org. Use that same email for all news tips, story ideas and song submissions.