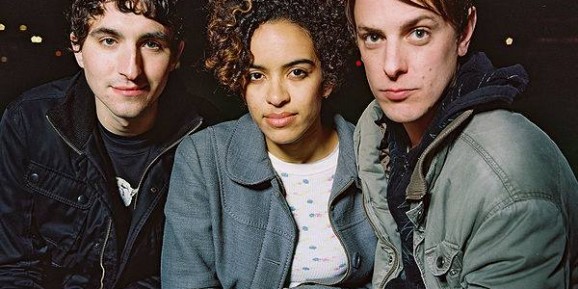 One out-of-state Saddle Creek band is already getting a jump on the new year.

Portland trio The Thermals announced a brand new record, We Disappear, via Pitchfork. It was recorded in the band’s home city and Seattle with ex-Death Cab For Cutie guitarist Chris Walla.

We Disappear is the follow up to the band’s 2013 Saddle Creek debut Desperate Ground, and is due out on the Omaha label March 25. That makes seven total LPs since 2003. Vocalist/guitarist Hutch Harris explained in the announcement that “technology, love and death” are the album’s main themes.

“Our privacy used to be so important to us and now everything has changed—we freely offer once private information about relationships and reveal everything about our day-to-day lives,” Harris continues. “We’re trying to preserve our life digitally so when we’re gone people won’t forget us. We’re using technology to become immortal. You can even set up Facebook and Twitter accounts to continue updating after you die! We Disappear is about how humans fight the inevitable.”

With the album announcement comes its first single, “Hey You,” a driving, crunchy ride to the grave, as Harris sings “it’s calling to me/hey you!” Hear the track below:

Omaha metal band The Clincher is gearing up for next week’s EP release with the debut of a brand new single.

The Clincher releases its new EP next Saturday, Jan. 23 at Lookout Lounge. Bittersweetly, it marks the finals show for guitarist Clarissa Lamb. RSVP here, and listen to “P.B.P.B.S.” below:

Singer/songwriter Matthew Sweet launched a Kickstarter in 2014 to fund a new album, and 15 months later it’s finally coming together.

Thought the album funded last spring, his mother passed away soon after, temporarily derailing the project. Now, he’s got a fistful of demos and a tank full of crowd-funded fuel.

“It’s definitely different from the label experience,” the Nebraska-native Sweet told Stereogum in a recent interview. “You never know who really truly likes you at the label. But the people on Kickstarter actually like you. So that just added a little mental thing to the process, where I’m constantly telling myself, I’m going to make a record so good.”

Sweet talks new album and his early ‘90s run in a Q&A with Stereogum published yesterday. In addition to detailing the recent recording process, the interview covers wildly optimistic breakthrough Girlfriend in 1991, the snarling pushback of Altered Beast in 1993, and the “adult album” in 100% Fun, a consolidation of the two into his most measured album in what writer Stephen Duenser calls a “loose trilogy.”

The now Omaha resident talks about listening (or not listening) to his old records, his Byrds influence and the musicians who helped make that early ‘90’s run. Read the interview in its entirety here.

Tonight, singer/songwriter Dan Tedesco plays in the Slowdown frontroom with Matt Cox. The Des Moines-based musician released a self-titled album in October, notable because it was recorded entirely with the use of an iPad. As the Des Moines Register details, Tedesco ran over his laptop while in the process of recording. Lacking formal sound engineering skills, he used a combination of iPad apps — Voice Recorder, GarageBand, Final Touch and Audio Mastering — to nail down his desired sound over the course of 10 months. RSVP to the show here.

In Lincoln, Philadelphia pop act Kississippi plays SP CE Commons with The Hottman Sisters and Mesonjixx. Kississippi — the duo of Zoë Allaire Reynolds and Colin James Kupson — released EP We Have No Future, We’re All Doomed in November on Soft Speak Records. Its closing track, “Greyhound,” has received national press from Stereogum and Noisey. The show is $5 (though no one will be denied for lack of funds) and doors are at 7 p.m. RSVP here.