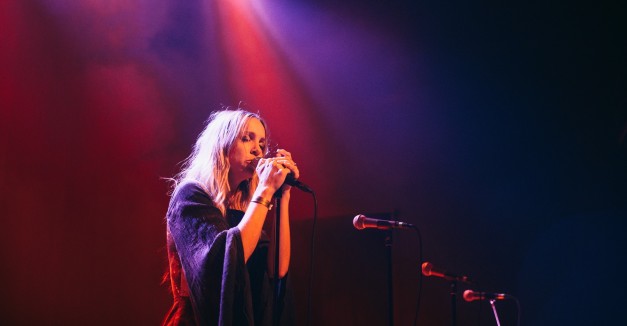 Emotional scars have a tendency to feel isolating. One’s past can feel like a relational roadblock, barring attempts to connect with others, or even provoking one to lash out. In the latest Mynabirds video, the weight takes a bloody, vampiric form.

Laura Burhenn is at once menacing and vulnerable in the “Velveteen” video, premiered yesterday via Noisey. A forlorn, tattered loner, she walks the streets in search of her next prey, only to find (everlasting?) company in a helping hand and unfortunate circumstance.

“Vampires are takers by nature—they have to be to survive,” Burhenn — who is currently wrapping up Spring tour — tells Noisey. “And the world is full of them. But it’s amazing what a little kindness can do in the face of that, making someone want to give instead of take, save instead of destroy.”

Below, watch the video for “Velveteen,” a track from her August 2015 LP Lovers Know:

Lincoln’s cultural and community strength will shine again at one of the city’s largest DIY events.

Dates have been announced for Lincoln’s Do-It-Ourselves Fest. The event, which celebrates DIY culture, music and learning through mutual aid, will take place Aug. 18-21. This year’s edition marks the third overall, and second straight year.

Organizer Margot Erlandson told us last year that DIO was a success, and with the help of smaller events and fundraisers throughout the year (like December’s mini-fest or Covers By Lovers earlier this month), the aim is to make it an annual occurrence.

Follow Do It Ourselves Fest here and check back for future updates.

NPR Music announced the winner of its Tiny Desk Concert contest earlier this month, and today released a list of 10 more of the best. A Nebraskan made the cut.

Andrea von Kampen’s tender breakup song “Let Me Down Easy” was included amongst funk, EDM and other folk entries from around the nation. Her inclusion is perhaps unsurprising given her Tiny Desk blog feature earlier on in the contest. In the list (find it here), writer Benjamin Naddaff-Hafrey raves:

“We were completely blown away,” he writes. “Her guitar has an appealing, organic tone, but her voice is overpowering and dynamic. She modulates from wistful heartbreak to forceful reproach. “Let Me Down Easy” is a well-constructed break-up song and Nebraska’s von Kampen ably conveys the ins-and-outs and ups-and-downs of emotional vulnerability.”

There are a pair of big, sold-out touring shows tonight: Third Eye Blind comes to The Bourbon, while They Might Be Giants plays Slowdown. If you’re interested, presumably you have your tickets. Let’s get to the rest of what’s going on:

Benson Songwriter Exchange hosts its Tuesday meeting tonight at Pizza Shoppe Collective, 6056 Maple St. This edition’s theme is “Occupational Hazard.” As is usual, you don’t have to have a song prepared to attend, but if you do, it should be written within the last two week. The group gathers for drinks at 7 p.m., then start the meeting at 7:30 p.m. RSVP here.