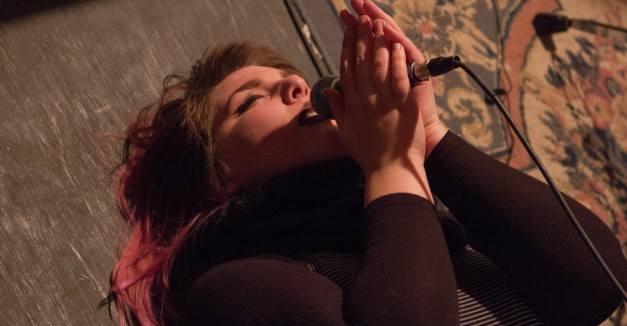 One of the most intriguing and enjoyable aspects of a house show is the easy, yet surprisingly layered atmosphere they can accommodate

For example, take last night’s eclectic lineup at SP CE Commons in Lincoln’s Near-South neighborhood — not a residence, but with a DIY basement space much like a home venue. It featured the vibrant harmonies of The Hottman Sisters; the moody, exploding ambience of Kississippi (on tour from Philadelphia); and the warm, groovy soul of Mesonjixx. All in front of one highly attentive audience throughout the three-hour affair.

That’s not to take an intimate basement concert too seriously; they are most-often loose and informal. It is due to that fact that such a lineup can be so well received by the same audience. Credit the diverse interests of the Lincoln scene, as well.

It’s easier at a formal venue or festival (like Lincoln Calling, where such a lineup is common) to remove oneself. Even during a  cold, damp Thursday evening, SP CE soaked in all three moods like a loving sponge.

Here are my three quick thoughts — one for each band — from show:

The Hottman Sisters’ blast from the past – That blast came in such a multi-faceted way that it took the first 20 minutes to figure out how they put it together. Jessica and Heather Hottman performed with a relatively new look: Jessica with bold-toned Fender electric and the addition of drummer John Evans. The Hottmans write tasteful pop music, and it’s the way their voices blend that gives it their chanting, bouncy harmonies a distinctly classic mid-’90s feel.

But songs like “Our Home” and “In Excess” were fleshed out by Jessica’s crunchy, full-throated Vox amp and Evans’ light, jazzy touch, the latter working smartly enough to be a plus while allowing the sister’s voices to beam. The trio really dug into driving hooks as if they were heavy Red Hot Chili Peppers outros, and you got the sense that they could fill a stage as many complementary musicians/instruments as they desired were it not for those harmonies doing the job themselves. Jessica noted during the show that they were recording; the direction they seem to be heading in suits them well. 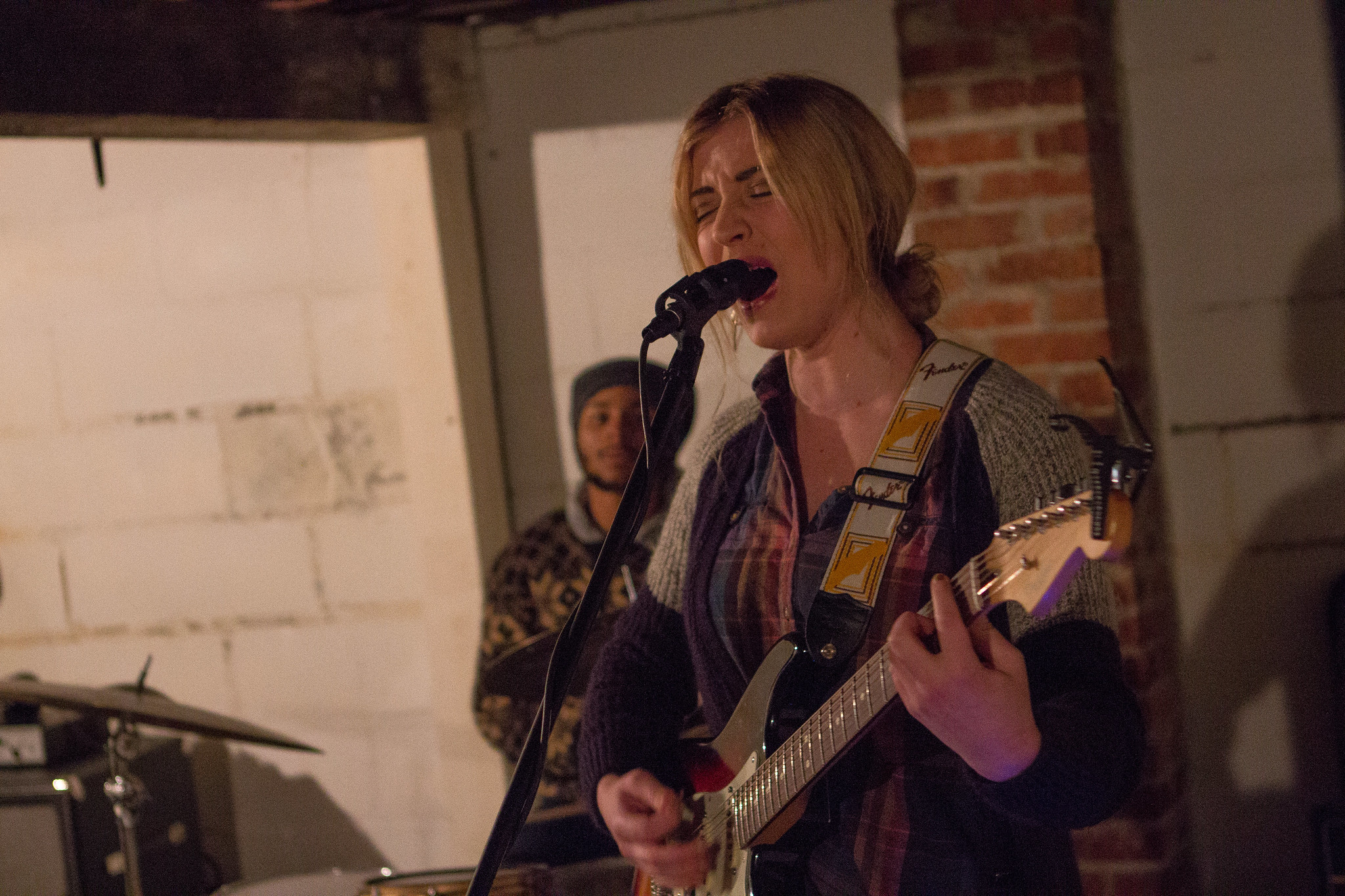 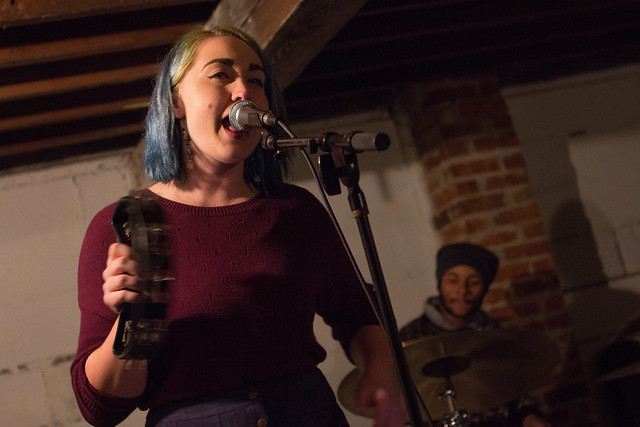 Kississippi and the dynamics of moodiness – If one were to judge simply by recordings, Kississippi displayed some unexpected qualities as well. Normally a duo, the Philadelphia foursome outfitted itself with a rhythm section for tour, give their ambient bedroom pop a post-rock jolt. Songs that began atmospherically were quickly slammed back to Earth by burgeoning riffs that nearly drowned vocalist Zoë Reynolds. Glitter flew into the air. A drum pedal was cracked in half.

As the rest of the band thrashed around her, my eyes kept drifting back to her at the center. She’d spend entire songs on the floor, both her entranced gaze and dreamy coo drifting upward to the ceiling. She sang as if none us were present, delivering introspection how you might while staring at a wall in an empty room, spilling crushing, epiphanic truths about yourself to no one precisely at the moment of their realization. That is to say, Kississippi threw the deep, dramatic curveball, creating and utilizing energy where there might have been less. And to great effect. 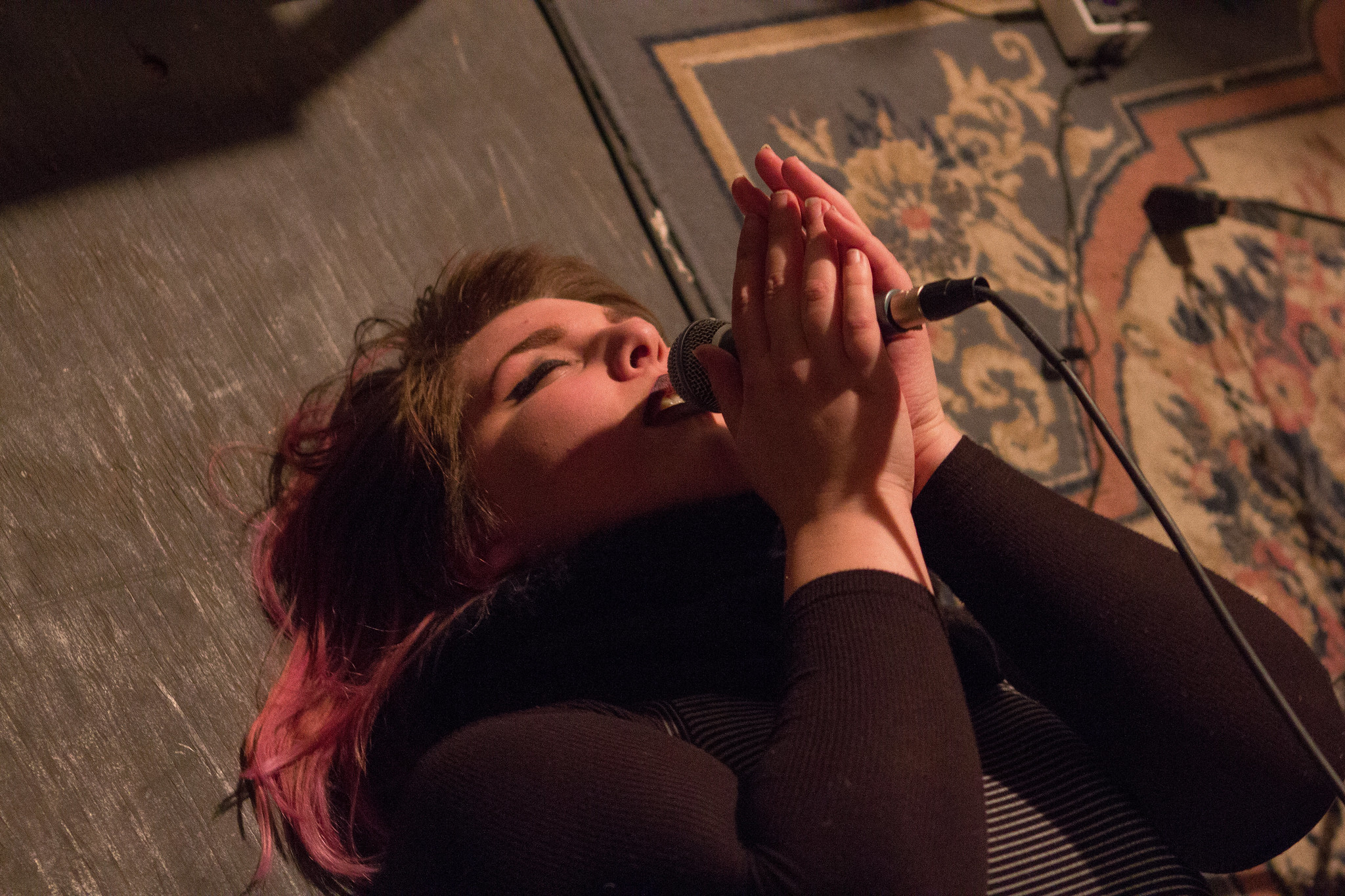 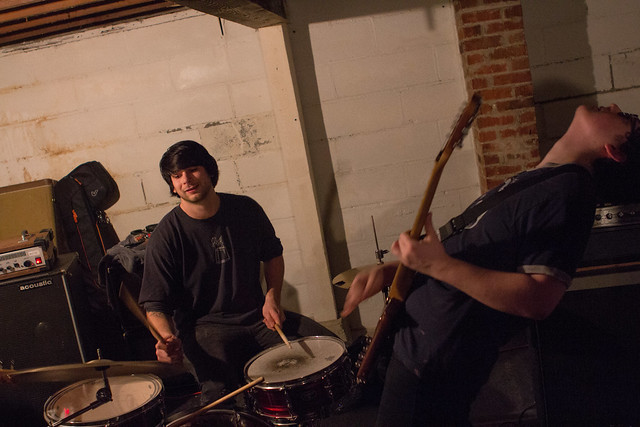 The velvet virtuosity of Mesonjixx – For all the talk of this band throughout 2015, it’s one I forget how much I’m going to enjoy until, say, guitarist Myles Jasnowski unleashes a positively unreal guitar solo. The lead player for so many a Lincoln outfit, he was especially sharp Thursday, letting loose twice to end the quartet’s main set. His fingers were a blur against his frets, delivering well-timed and intelligently placed note after note in rapid succession.

Apparently not one to be overshadowed, bassist Josh Bargar got his during Mesonjixx’s unexpected encore. Jasnowski and drummer Kekeli Dawes — who himself made his blend of jazz, rock and soul styles seem effortless — backed off just enough to Bargar to undam a bubbling, aqueous bass solo. It was as if his hands welled earth from the ground. Hard to blame vocalist Mary Lawson for simply stepping aside and watching. She had already melted hearts through soulful melancholic confession and longing yet heartening slow-dance. Her voice dripping with the same feeling gushing from the band behind her. As a whole, it was entrancing. No stage seems too big or too small for Mesonjixx; in fact, the tight space is where it shines. 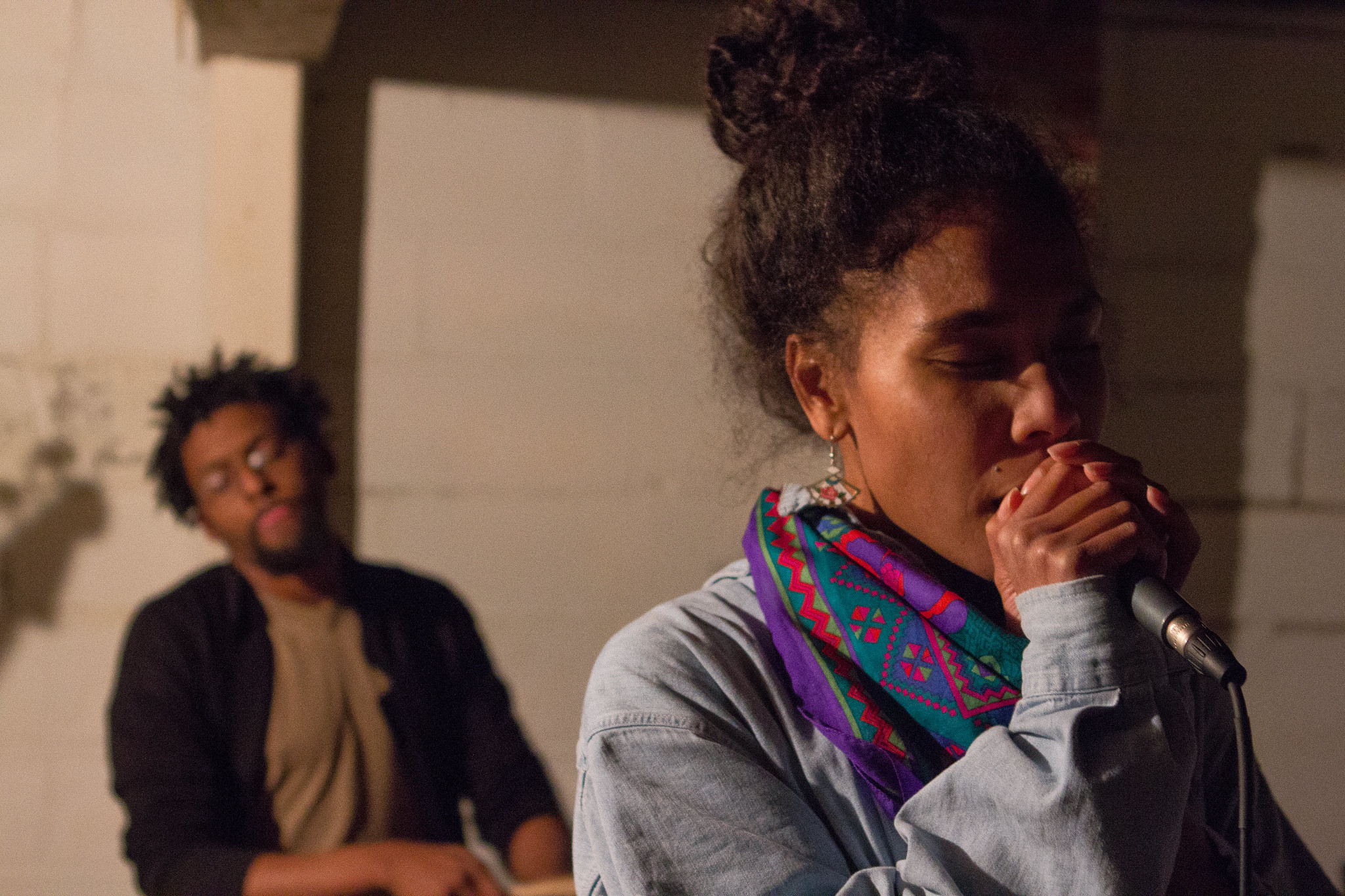 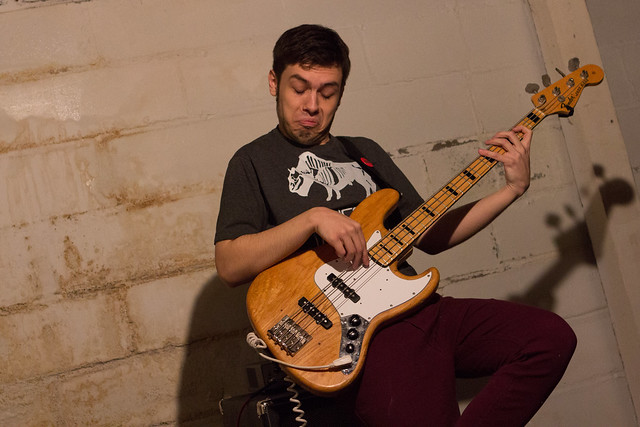 It’s going to be a packed (and frigid) weekend of local shows. Here’s a few to get you started:

Mad Dog and the 20/20s at The Bourbon – the Lincoln ska band headlines a five-band lineup rounded out by Jazzocracy, Lost Boys, Lighthouses and Everything Breathes. The 18+ show starts at 9 p.m. RSVP here.

The Sunks, Halfloves and I Forgot To Love My Father at Slowdown – Iowa City indie rockers begin a two-night Nebraska run in the Slowdown front room with Omaha’s The Sunks and Lincoln’s I Forgot To Love My Father. Halfloves is set to release a self-titled album in March, and came forth yesterday with its first single, “It’s Easy To Love.” RSVP here.

Catch Halfloves and I Forgot To Love My Father with Life Is Cool the next night at The Bourbon (RSVP here).

Eastern Turkish, Cordial Spew, The Cuterthans and Dummy Head Torpedo at Lookout Lounge – The Omaha punk rock trio returns for “Not Another” reunion show. It will be their third in four years, since playing its last show Jan. 6, 2012. That’s okay, because no one is complaining. How could you, what with fellow Sandbox favorites in Cordial Spew joining, and a couple of scene favorites rounding out the bill? RSVP here.

Eric In Outerspace, Dirty Talker, Lodgings and Better Friend at Milk Run – This new venue has already booked a string of cool shows, thanks to proprietors and Perpetual Nerves duo Chris Aponick and Sam Parker. This one promises to be loud and fuzzy with a quartet of indie/post rock bands. RSVP here.

J Crum with Justin Carlisle, Dominique Morgan, Mola-B at Slowdown – There isn’t much in the way of hip-hop or R&B this weekend, so savor both at Slowdown tomorrow night. Carlisle released new EP Killin’ It on New Year’s Eve, which you can hear below. Morgan released an EP of his own, Dom’s Favorite Things, in November. RSVP to the show here.

SAS Second Sunday Residency at White Rabbit – If you missed the singer/songwriter’s December run, catch her on the second Sunday of each month at White Rabbit, starting this weekend. Her first guest is cellist and former Lincolnite Meaner Pencil. RSVP to the 7 p.m. engagement here.

As always, head to our statewide calendar at hearnebraska.org/events for a full listing of this weekend’s shows. If you do not see your show or one you plan to attend, email us at news@hearnebraska.org, or add it yourself. And keep those song submissions, story ideas and news tips coming.
Out and about? We will be too! Hit us up via Twitter and Instagram @hearnebraska. And remember to bundle up.