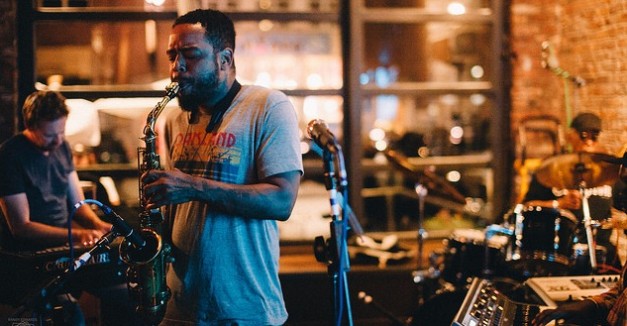 When hip-hop giant Kendrick Lamar took home the Grammy for Best Rap Album, so did his Omaha native collaborator.

Multi-instrumentalist and producer Terrace Martin worked with Lamar on the rapper’s groundbreaking album To Pimp A Butterfly, which was also nominated for album of the year. The record also earned honors for Best Rap Performance and Best Rap Song for “Alright” and best Rap/Sung collaboration for “These Walls.”

Martin wasn’t the only nominated artist with Nebraska ties. Vocalist Karrin Allyson was nominated for Best Jazz Vocal Album for Many A New Day, a compilation of Rodgers & Hammerstein originals. Allyson is a former Omaha resident and former University of Nebraska-Omaha attendee. And don’t forget Lincoln native and Maroon 5 guitarist James Valentine, whose band was nominated for Best Pop Duo/Group Performance, losing out to the Mark Ronson-Bruno Mars mega-hit “Uptown Funk.”

Carson has also worked with 2016 nominees Ed Sheeran (who won Song of the Year), Jah Cure, and more.

Though he was not directly involved with anything nominated in 2015, Carson has worked with plenty artists who were. Carson is also working on a record with Robert “Sput” Searight, Lamar’s Butterfly drummer and keyboard player on Velvet Portraits. His jazz band, New York-based Snarky Puppy, won Best Contemporary Instrumental Album for Metropole Orkest collaboration Sylva. Carson also mixed Searight’s and Nate Werth’s record Ghost Note.

View a complete list of Grammy nominees and winners here.

Saddle Creek representative Jeff Tafolla says that though the Omaha label usually moves slowly when it comes to signings, Big Thief was a no-brainer in terms of fit.

“We fell for Big Thief instantly upon hearing Masterpiece.” Tafolla says. “We got in touch the band, we felt comfortable working with them immediately. The record is really terrific. We’re excited for everyone to hear it.”

It’s already a busy year for Saddle Creek, after a cascade of 2015 albums by Twinsmith, Icky Blossoms, The Good Life, The Mynabirds and Hop Along. The label will also reissue the Philly band’s Get Disowned on March 4 as well as The Thermals’ new record We Disappear March 25.

Listen to the title track from Big Thief’s forthcoming album below:

Tonight, Athens, Ga., band Mothers plays O’Leaver’s with Eklectica and fellow Athens native Graham Ulicny’s project Thick Paint. Mothers began in 2013 as vocalist Kristine Leschper’s solo project, expanding not long after into a full-fledged band. The indie-folk band debuted single “No Crying In Baseball” in October, followed by the lead single, “Too Small For Eyes,” from its forthcoming record. When You Walk A Long Distance You Are Tired drops Feb. 26. RSVP to the show here.