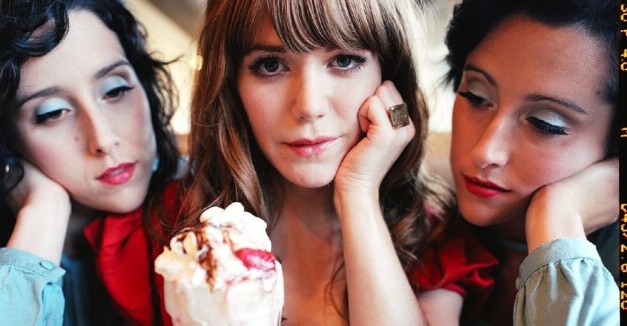 “My first reaction was, ‘Are you crazy? I’m in a rock band!’” she recently told Village Voice in an interview. “But he persuaded me. I made it and had zero expectations.”

It turns out, Oberst’s urging changed the course of her songwriting career. The resulting 12-tracks she formed into Rabbit Fur Coat — again, with Mogis’s help — sent her down a successful solo path that has since yielded two more albums and sealed her status as indie rock A-lister (if there is such a thing).

The stories are told, the connections to Omaha stated at-length, yet all resurface thanks to the 10-year reissue of Lewis’ debut solo album. In a handful of recent interviews, she gushes about hers and Rilo Kiley’s connections with the local scene, including Saddle Creekers like Oberst and Tim Kasher. Lazy-i blogger (and HN board member) Tim McMahan did a fine job yesterday of aggregating choice Omaha-related quotes from those interviews; read his post here.

In a 2002 interview, Lewis told McMahan about meeting Kasher in San Francisco and caravaning to Iowa. They stopped off in Lincoln and Omaha on the way, and the rest is history. After touring Lincoln’s Presto! Studios, Rilo Kiley decided to record there with Mogis, and released sophomore LP The Execution of All Things on Saddle Creek.

Omaha and its indie songwriting intelligentsia seem inseparable from Lewis’ mid-career work, including Rabbit Fur Coat. To Noisey’s Dianica London, she called Oberst “a great influence lyrically” and “very much a part of the songs and the spirit of the record.” In a Rolling Stone interview, Lewis labels him “my weird spirit guide.” And Mogis was flown out to Los Angeles to help record the record.

In addition to honoring Lewis’s breakout solo record (and one of my personal favorites), the 10-year re-release and subsequent tour/press cycle brought the Omaha scene to the national spotlight in a influentially positive way. It says a lot about the “golden days” of Omaha/Saddle Creek music.

One last note: I bring this up not to belittle the scene today. We believe it’s doing many great unique things today, whether in the national spotlight or not. But it’s definitely neat to reconnect some of these dots.

Benson Songwriters Exchange has facilitated creativity and musical growth in weekly meetings for a little more than a year. To help guide its mission, its organizers are asking for feedback.

BSE is working towards nonprofit status, and has created and shared a survey aimed at area songwriters to find out what might motivate them to attend meetings, and how those meetings would best serve them.

Established in November 2014, BSE is a Tuesday bi-weekly summit among area songwriters (or aspiring songwriters) to support, share and discuss each others’ work at its current Reverb Lounge home. In addition to writing exercises and song sharing, participants choose a “song challenge” for the next week. All attendees write a word or phrase on a slip of paper, scramble them in a hat and draw the following meeting’s topic.

“This is a community of artists interested in being challenged and inspired by each other,” says BSE coordinator Brad Hoshaw. “Through this survey, we are hoping to get feedback from songwriter’s to help us focus our mission and goals toward their needs.”

Find the Benson Songwriting Exchange survey here. To learn more about becoming a member, visit BSE’s website here. Basic membership is free, and includes participation in each meeting. Premium memberships are available for $40, and include website listing, performance slots at BSE showcases, inclusion on the annual compilation disc and discounts at select music stores.

Nebraska native comedian Ian Douglas Terry returns to the Cornhusker state this evening for a birthday set at Lookout Lounge. His performance will be recorded live.

“I still feel deeply connected to Omaha so I wanted to come back and record in my home town,” Terry says. “The guys that own Lookout are some of my oldest friends who I’ve known since ‘The Fonzarellies’ days, when I was a 15 year old kid tagging along on one of their Midwest tours, so it feels full circle recording with them involved.”

Terry is on a run of recent success, including his curation and production of the annual Crom Comedy Festival, as well as performances at the High Plains Comedy Festival in Denver, The Fest in Gainesville, Fla., and Chicago’s Comedy Expo. He is also a professional wrestling manager, which he says is “slightly cooler than being a stand-up comedian.”

Tonight, bass music artist Brillz brings the Twonk DiNation Tour to The Waiting Room. The producer’s “trapped-out” blend of hip-hop and EDM propelled his first record and batch of singles into the iTunes dance charts Top 10 ranks. Brillz recently launched his own brand of vaporizer liquid called “Twonk Juice.” He recently signed a record deal with Mad Decent, releasing the Geekin EP in October. Party Favor, Ghastly and Infuze round out the bill. RSVP to the 9 p.m. show here.