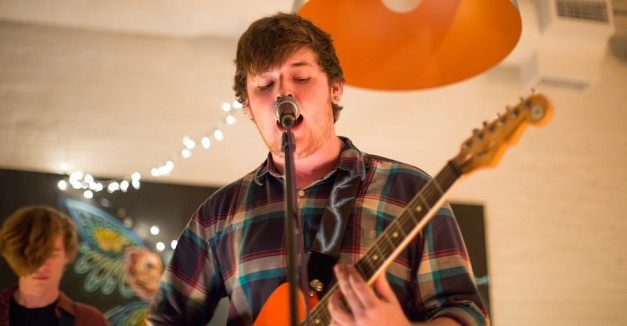 There’s an adventurous meandering in much of Super Ghost’s explosive cadre of rock songs that gives them a sense of circular grandeur, on display at the band’s August Sofar Sounds Omaha performance.

Whether it feels like the Omaha quartet is rushing along railroad tracks or soaring over a city blocks, the sonic landscape created by noodling riffage, head bobbing verses and propulsive breakdowns is constantly evolving. Under the wide “indie rock” umbrella, frontman Jake Newbold’s screaming head voice points to punk and prog influences. “Really Really Tall Buildings,” courses throughout those veins back to its initial theme, leaving us feeling well traveled.

Super Ghost closed its Aug. 22 Sofar Sounds Omaha gig at Flywheel with “Really Really Tall Buildings.” With videos of Mesonjixx and Both from that same show on the way, watch the first of three below:

Unless you were paying close attention, you may not have noticed Sofar Sounds Omaha’s Facebook post noting its permanent hiatus. Its Feb. 25 concert with Rothsteen, Conchance and High Up would be its last. Organizer John Schmidt says all are on friendly terms with Sofar Sounds, but with members of the team neck-deep in other projects (some out of state), it was time to move on.

Since its first show in Fall 2014, Sofar Sounds Omaha has delivered 10 eclectic shows in unique or unconventional spaces. From living room to plant nursery to downtown business, the series mixed touring and local bands for secret, focused house-style shows. In the end, Schmidt says he’s most proud of utilizing the format simply to get people excited about shows.

“A lot of these artists work their asses off just to be heard, and we could always guarantee a full room of open ears,” Schmidt says.

We know that more videos are on the way, and it’s not as though house show venues aren’t booking touring and local acts together. But it’s always disappointing to watch one go. Mum is the word on the future, but an ensuing comment by the Sofar Facebook account mentioned the Feb. 25 show was the “final show for our current crew under the name Sofar.” So we’ll see.

From Broadway musical to jazz staple to internet phenomenon, the upcoming Omaha Performing Arts season is as eclectic as ever.

The arts organization’s 2016-2017 season schedule was announced Monday during a subscriber and patron Season Reveal event at the Holland Performing Arts Center. Details on more than 40 concerts, musical and other performing arts events in nine programs were revealed, offering a comprehensive menu for the upcoming year.

throughout the year,” says OPA President Joan Squires. “With our Broadway, Jazz, Dance, Family, Showcase, and National Geographic Live Series, along with the 1200 Club and Special performances, we are offering a diverse range of performance options that appeal to a wide range of patrons.”

Tonight, The Turnpike Troubadours play The Waiting Room. The Tahlequah, Okla., Americana/roots rock band is currently on tour through the South and Midwest. They play tonight with Atlanta rock band Radio Birds, which hit The Bourbon last night. Tickets are $25, purchase them here.