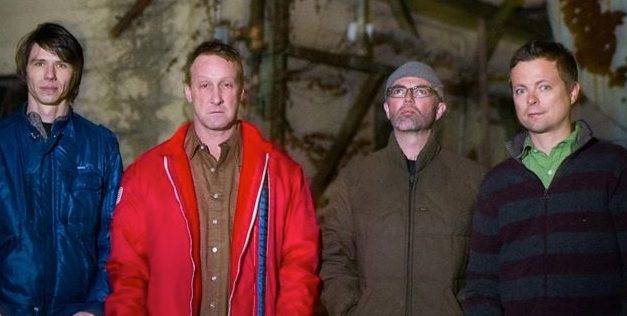 The last time Strawberry Burns performed live as a quartet was March 27, 2015. It was a benefit for the longtime Lincoln band’s bold, energetic bassist/vocalist Pat Clinch, who had in the preceding months been diagnosed with pancreatic cancer.

The original billing comprised Westside Proletariat, Pharmacy Spirits, Crush the Clown and American Wasted. Strawberry Burns wasn’t expected to perform, until earlier in the day when Clinch, who was well into treatment, grabbed his bandmates and informed them they’d be going on that evening.

Drummer Brock Beckman told the Lincoln Journal Star: “Singing those songs and playing those parts required some energy, and he brought it.”

Two months later, Pat Clinch passed away at his Lincoln home, but not before tracking the band’s latest album, Mothawk, in his final weeks. Friday, Pat’s bandmates — playing as a trio for the first time — will honor his memory by releasing that album through the band’s final show (Vega, 9 p.m., RSVP here).

Last night, it was my pleasure to be joined by Strawberry Burns drummer Brock Beckman, who described the final weeks of recording with Pat, talked about what it means to release Mothawk now and, later in the show, played a pair of songs from the new record (times noted below).

Beckman was accompanied by Journal Star reporter Cory Matteson, who wrote the aforementioned article telling their story. Listen to our conversation below:

Omaha songwriter/pianist Anna McClellan has assembled a band and will head west on tour this fall, starting Sept 23 in Oklahoma City and ending at Lincoln Calling Oct 8 and O’Leaver’s Oct 9.

McClellan will hit a variety of venues on this trip, from a handful of house shows to an appearance at San Francisco’s Hardly Strictly Bluegrass Music Festival in Golden Gate State Park.

The accompanying band is a new one, though its composition makes is highly intriguing. Joining her on the road are See Through Dresses’ Sara Bertuldo (See Through Dresses), Big Harp drummer Daniel Ocanto and everyman Jim Schroeder.

Last year, McClellan released her debut solo album Fire Flames on Portland, Ore., tape label Majestic Litter. With its marriage of classical piano and indie rock sensibilities, it’ll be interesting to see how the songs are arranged with a band full of heavier-leaning players.

See all tour dates below:

Nowhere do his criticisms hit with more force than on album closer “Birdz of Prey,” for which Sleep Sinatra has released a new music video. Shot at various second and third-story Lincoln locations, the emcee visually rises above it while drawing a line in the sand; you’re either with resistance to oppression or you’re part of the oppressors. Indifference is impossible because it tacitly means compliance.

Sleep’s aggressive, unwavering flow is matched by producer MCV. The track itself pounds hard, unconcerned with the difficulty its audience has digesting its message but ensuring its delivery. With a minute to spare, the tone downshifts into a drifting conclusion.

Watch “Birdz of Prey” below:

Plan the week in live music with our statewide calendar here. If you have shows to add, or other news tips, story ideas or song submissions, email us at news@hearnebraska.org.