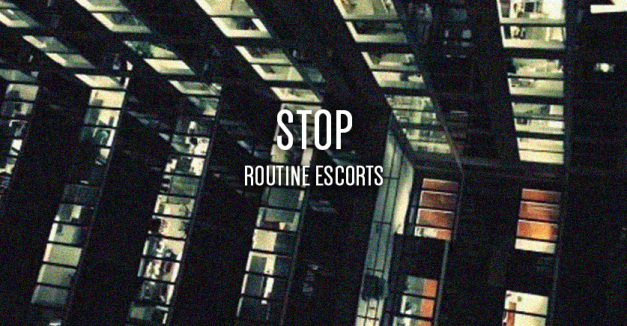 On the Grown-Ups EP, released in October 2013, the Omaha-based electronic duo traffics in a smartly pop-sensible ambience. Listen to our podcast review of the debut EP here.

With “Stop,” Tom Flaherty and Jon Tvrdik build on that same ambition, but this time around the track is driven less by intricate waves of synthesizers and more by a punctuated bass drum beat brought further to the fore. Put in electronic music parlance, “Stop” is more of a banger than anything that appeared on Grown-Ups, and it shows a promising inclination toward growth.

The most rewarding part of “Stop,” and what the track implies about the rest of Good Lies, is that Routine Escorts makes no sacrifices for an infectious beat. The new wave synth solos are still present, the reverberated vocals still strike a delicate balance between spotlighted-feature and cog-in-the-machine.

But there is a new layer here, a sense of urgency that manifests in a certain intensity, and propels “Stop” to its close.

It’s hard to listen to anything from the duo without thinking about other artists recently that have dipped into late ‘80s synth pop, like Cut Copy or Twin Shadow. Routine Escorts is comfortable in such company, but the duo sounds like it approaches from a more technical standpoint than George Lewis Jr. (Twin Shadow) probably does. Nothing feels improvised — you won’t hear anything like a shredding guitar solo. It’s more like a meticulously balanced equation.

Listen to “Stop” here and look for the full EP next week.