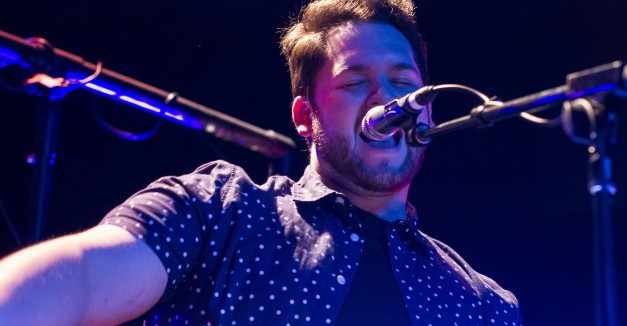 Well-lit and upbeat, State Disco shows are typically quenching for those thirsting for indie dance rock. Yet, the Omaha band’s new live video reveals a more emotional side.

With instruments adorned like landing strips and disco balls glinting, “Balcony” begins with twinkling guitars and a swelling synthesizer, like deeper, bluesier Sparta cut. As the ballad behind him intensifies, vocalist Cody Rathman’s vocals crescendo from gentle coo to delirious scream before a dramatic, screaming guitar solo brings the song to a climax.

State Disco debuts the video for HN today in advance of its first headlining show this weekend at Reverb Lounge with AZP and Rothsteen (RSVP here). The live performance was filmed at Slowdown May 15 as the band opened for Twinsmith. Bassist Jared Bakewell says they wanted to feature an alternative look.

“Most of our songs are up tempo, danceable, and fun. But sometimes you’ve got to offer up a heartbreaking ballad to maintain balance,” Bakewell says.

“We were told one of the lasers isn’t entirely legal in the United States, so hopefully we don’t cut a hole in the ceiling or anything,” Rathman says. (We hope he’s joking).

And now, the debut of State Disco’s live “Balcony” performance.

Tonight, alt-country/punk band Lucero brings its hard-touring act to Slowdown. With its original lineup intact, Lucero has played upwards of 150 shows per year since 2001. The band released its 11th studio album, All A Man Should Do, September 18 on ATO Records. RSVP to the 9 p.m., all-ages show here.

In Lincoln, HighLucyNation hosts its free pre-11th anniversary party at Bodega’s Alley. Boulder, Colo., reggae-rock band Na’an Stop stops by on its Get Wet Midwest Tour, with support from djBLAC, JMNM, Jonny Beatz and more. Yesterday, we published a Q&A with HLN founder Dustin Dohrman, which can be read. The pre-party starts at 9 p.m. and is 21+. RSVP here.

Around the corner, Zoo Bar will host Justin Ready & the Echo Prairie, The Hottman Sisters and Jales Hupka from Virgin Mary Pistol Grip. You might not want to miss this one if you hold an OEAA vote, as all three acts have been (deservedly) nominated for this year’s “Best New Artist 2015” award. RSVP to the 9 p.m. show here.

And finally, Fever the Ghost plays Vega with Purple and Omaha’s Black Finger Cult. In just under a year, the spacey psych-pop band has gone from the fray to one of Los Angeles’s stand-out acts, releasing its debut album Zirconium Meconium in September. RSVP to the 9 p.m. show here.